The massive backlog left DUI arrests to sit unprosecuted for years and potentially dangerous drivers back behind the wheel. The court says that's changed. 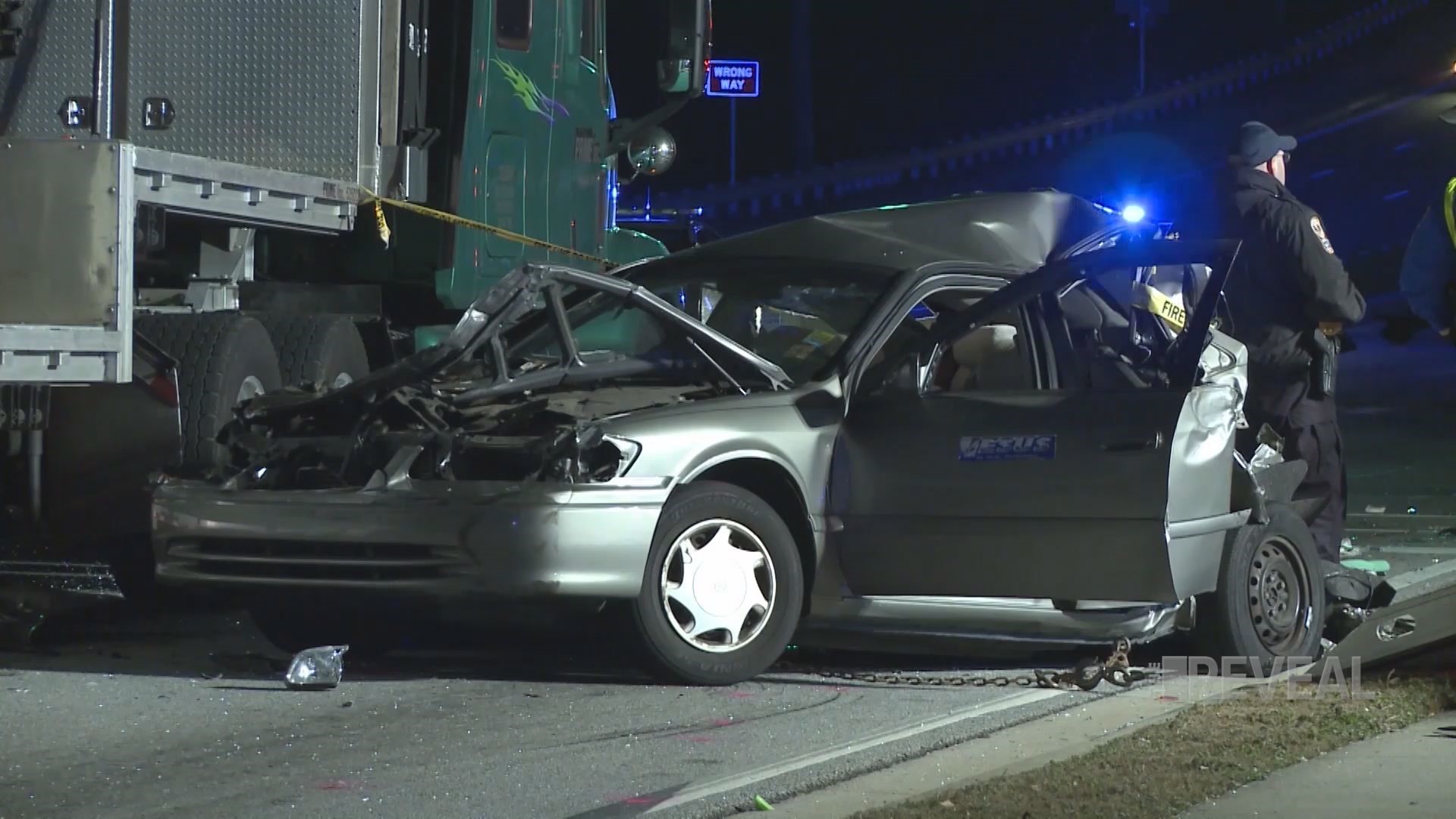 FULTON COUNTY, Ga. — He was driving down the road with his wife when another driver lost control and hit them.

It was a Thursday night just before 9 p.m. on Lavista Road in Tucker when Edward Harris and his wife Leigh were hit head-on by a Toyota Camry.

Edward and Leigh were pulled from their Honda Accord unconscious. Both were taken to the hospital where Edward later died.

The driver of the other vehicle, Benjamin Rollins, had just left the Moon Shadow Tavern with his ex-girlfriend, according to the police report. He later admitted he had been drinking and recently smoked marijuana.

A witness helped Rollins and his passenger out of their wrecked vehicle. Rollins then ran, telling the witness, "I have to leave I don't have a license," according to the police report.

Rollins was arrested later that night for vehicular homicide, DUI, hit and run, and driving with a revoked license, among other charges.

This wasn't the first time Rollins was arrested for DUI. He had two previous DUI arrests, one being in DeKalb County and the other in Fulton.

At the time of the deadly crash, Rollins was on bond waiting for his trial in Fulton County. He was part of a group of 29,000 backlogged cases, many from 2015, the court was working to resolve.

A review of court records shows it took almost 16-months to accuse his case. After he pleaded not guilty, there were motions filed and hearings scheduled, but a year later, the case still had not made it to trial.

When Rollins did appear in court, it was to answer an emergency motion to revoke bond. The solicitor's office asked for the maximum penalty of 24 months in jail. He was sentenced to six months behind bars and six months probation.

HOW WE GOT HERE

When Solicitor Gammage took office in 2016, his staff worked to streamline processes to accuse cases within 90 days of receiving information.

Court data shows open cases actually started to surge in 2015, jumping from about 12,000 to 45,000, but the pattern has certainly continued.

State Court Judge Susan Edlein attributes it to the solicitor’s efforts to clear the backlog, as well as special citation only calendars to fast track certain types of traffic offenses.

The solicitor’s office says 85 percent of cases on the citation docket are now resolved with only one court date.

Edlein points to another piece of data, the state court’s clearance rate in 2018 - 117.5 percent. That means the court managed to close more cases last year than it took in, reducing its caseload.

“We’ve increased the number of days we’re doing for criminal trials because we realize there’s been a lot of cases that the solicitor general has looked at and now those cases have come to us to handle,” said Edlein.

Both the court and Gammage credit increased funding and resources from the county for helping to hire additional staff and improve training to move cases more efficiently through the system.

But, as seen in the Rollins case, charging a driver isn’t the same as convicting one.

Judge Edlein was not a part of Rollins’ case, but she knows what’s at stake. She said every judge controls his or her own case docket.

She tries to get criminal cases on the trial calendar within six weeks of arraignment but stressed a number of things can delay the actual event. Attorney schedules can conflict, there are challenges getting discovery or even witness information. Even a defendant’s own incarceration on a prior offense or treatment can delay prosecution.

11Alive began to investigate the impact of the backlog when we became aware of 24 DUI-related cases dismissed by one judge in one day without hearing any evidence.

After Fulton County State Court Judge Jane Morrison made the decision to dismiss the cases, the solicitor’s office vowed to appeal. It won, sort of.

RELATED: Caught & Released: The evidence was there. So why did a judge throw out 27 DUI related cases?

The appeals ruling is complicated but essentially states Judge Morrison had authority to dismiss the cases as long as there was enough time for the solicitor’s office to re-accuse them if desired.

At issue is the statute of limitations to file the accusation which, in these types of DUI cases, is two years from the date of the arrest.

After the judge’s dismissal, the state could not have re-accused nine of the cases involved, so those are now the ones back before the court.

The solicitor's office has filed a motion indicating it is ready for trial and says it has reached out to the defendants' attorneys to determine if any want to change their plea and settle. The problem: due to the age of these cases, some defendants no longer have the same attorney or any attorney at all.

Lauren Thomas is grateful she does still have representation. She is one of the cases now back before the court.

Arrested in May 2015, her case wasn’t accused until March 2017. When Judge Morrison dismissed the case, Thomas thought it was over.

Thomas has no prior DUI convictions and insists in this case, she's innocent. She moved to Las Vegas to start her own business but will now, four years after her arrest, have to spend her own money to travel back to Atlanta to prove it in court.

RELATED: How a DUI charge never prosecuted followed a woman for years, despite her claim of innocence

As for the other 15 DUI-related cases dismissed by Judge Morrison, if the solicitor’s office had filed an appeal with the State Court or re-accused them immediately rather than taking them to the Court of Appeals, those might have continued toward trial, too.

The Reveal Investigator Rebecca Lindstrom tried to talk with Solicitor Gammage after the ruling was issued. He did not show up for the scheduled interview insisting instead to only answer questions in writing.

“Because we are still litigating the issues surrounding these cases, it’s most appropriate for me at this time to reserve comment until after the cases are closed. We agree with the favorable ruling by the Court of Appeals. We respect the trial court and other advocates and we will continue to pursue justice and fair resolutions on all cases. In an effort to resolve these matters, our team has reached out to other parties associated with the cases to work out resolutions. We look forward to providing further comment once the criminal matters are completely resolved,” wrote Gammage.

Seven months after Judge Morrison dismissed the cases, one of the defendants was arrested again for DUI. Alpharetta Police pulled him over, accusing Jeffrey Nelson of swerving between lanes. Like in his first arrest, the officer said he detected a strong odor of alcohol.

According to the police reports, both times Nelson refused to participate in the field sobriety test and went to jail.

The ruling by the Georgia Court of Appeals will allow the solicitor’s office to take both cases to trial, but no date has been set for either. Nelson has pleaded not guilty.

At least one other driver involved in the appeal has been arrested for DUI since the cases were dismissed.

After we started reporting on the impact of the county’s DUI case backlog, the solicitor announced Operation Double Victory, “an unprecedented alliance” with the city of Atlanta to deputize prosecutors in both courts to put cases on a fast track.

A year after the announcement, the intergovernmental agreement needed to make that happen has yet to be finished.  But cooperation between the departments has allowed case information to be shared quicker.

The solicitor's office has also helped the city, and others, get repeat DUI offenders to the accountability court in months rather than years.

“If someone gets arrested for a DUI and it’s their third offense, the faster we can get them into treatment the better it is. Number one, safety is key for all of us involved,” said Judge Edlein, one of two Fulton County state court judges who oversee the program.

While the program started in 2007, Judge Edlein said a third of its participants have come through in the past four years. Edlein said 97 percent of the people who enter the program graduate and she believes most stay sober.

So far, 774 people have been accepted, with 110 active participants. But that’s compared to the 3,300 total open cases the solicitor’s office estimates were open in March of 2019.

DUI accountability court is a post-conviction process that becomes a part of an offender’s sentence. It is only available to people who already have two or more DUI offenses and pleaded guilty.

“There’s a whole statewide move for more accountability programs. The idea is not to just put people in jail, it’s trying to address what the underlying issues are to have better successes," explains Judge Edlein.

DUI accountability court feels different from most courtrooms. Judge Edlein doesn’t wear a robe or sit on the bench. She stands in front of participants, asks them questions, and doesn’t hesitate to celebrate their victories.

Even the prosecutors sit facing participants, along with service providers, who each give reports on progress.

Edlein said graduates from her DUI court often say the program saved their lives. It may be saving the lives of other innocent motorists, as well. The impact is not lost on Edlein.

“It’s the most rewarding thing I’ve ever done professionally.”

5 years ago, she was left for dead by a DUI driver. Now, Emily Bowman is returning to school

How a DUI charge never prosecuted followed a woman for years, despite her claim of innocence