A Georgia man was left dying in a ditch for more than an hour. Nobody called 911 – including a Georgia state representative and a local police chief. 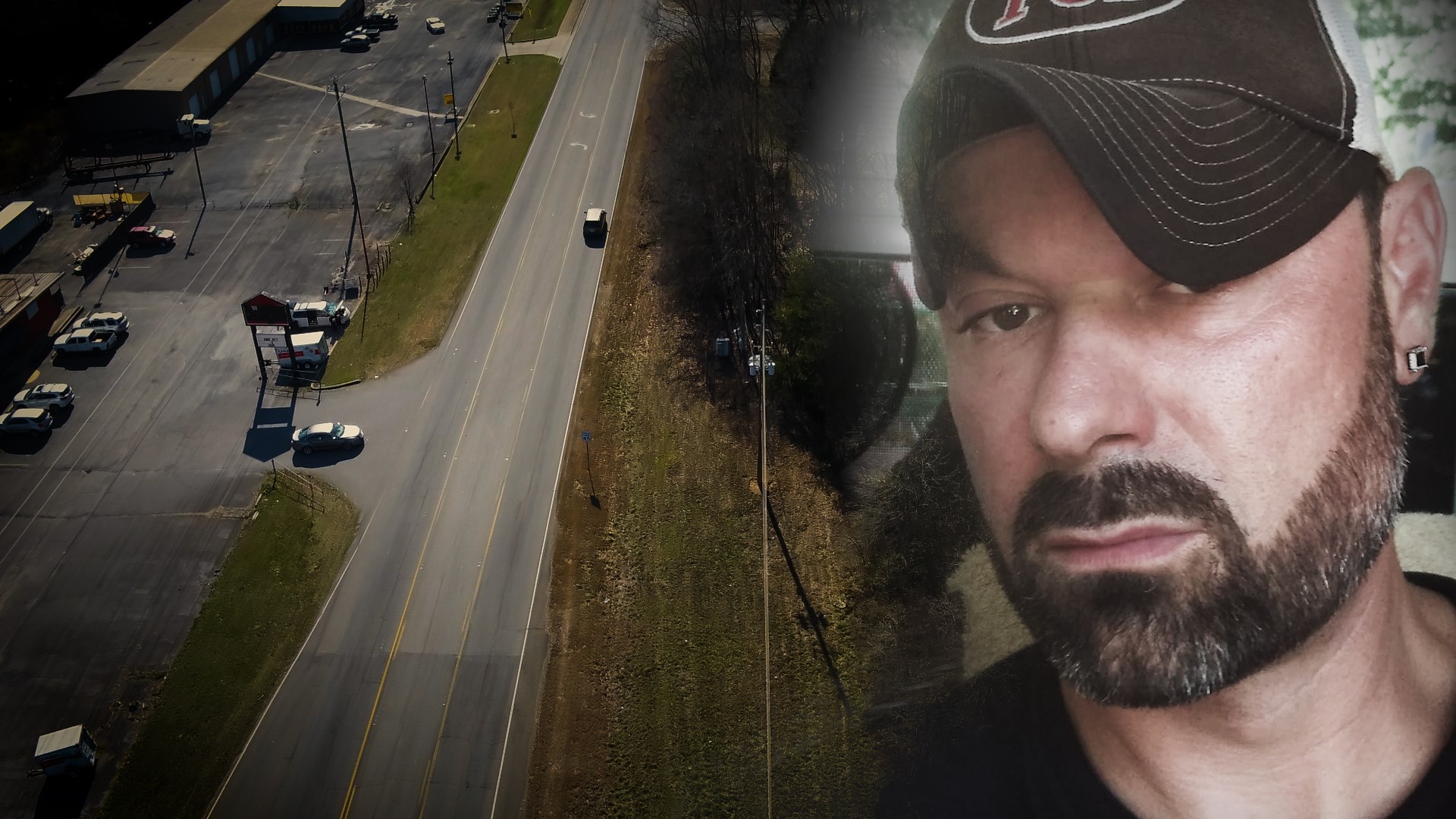 CEDARTOWN, Ga. — The day Aaron Keais and his older brother, Eric, were supposed to start working together as painters, Aaron was awakened by a phone call.

It was his dad. It was bad news.

Police had found 38-year-old Eric dead in a ditch, the night before, just three miles from his home. A driver hit him while he was riding his bicycle down North Main Street in Cedartown.

And Polk County Coroner Tony Brazier wasn’t ready for what he would learn about the crash. That his friends, some of the most prominent people in the community, were involved in the aftermath to varying degrees.

“We realized early on that this was going to be a problematic case,” he said. “This was more than just a regular accident. The vehicle had been moved.”

There was also a bit of red paint on the front bumper of the impact area, the document notes.

Dover drove almost a mile before stopping in a convenience store parking lot, the documents say.

UPDATE: No charges filed against driver who hit a man and left him dying in a ditch, DA responds

Dover didn’t call police. He didn’t call 911. He called a friend who he had been hanging out with at the county fair that evening.

That friend was attorney and Georgia State Representative Trey Kelley.

Dover later told police, "at first, he didn't know what he hit and then said it could have been a deer or possibly a person," the police report continued.

“The best-case scenario, let’s say, ‘OK, [Dover] told [Rep. Kelley], 'I hit a dog or a deer.' Are you going to drive a mile away and call a lawyer? No," Brazier said, emphatically.

The Reveal's exclusive investigation shows not only did Dover not call 911, Rep. Kelley also didn’t call 911, though, according to his statement to police, Kelley "saw a bicycle at the side of the road."

While Eric was lying in the ditch dying, "[Rep. Kelley] observed a bicycle on the side of the road and immediately called [Cedartown Police] Chief [Jamie] Newsome" at home, the police report said.

In a statement to investigators, Chief Newsome, who was off duty at the time, says he thought Representative Kelley was calling on behalf of Dover for an SR-13 [accident] form.

But then, in the middle of the conversation with Rep. Kelley, the police chief wrote, “I stopped him and said something akin to ‘what, he might’ve hit a person?”

Newsome says he then told Kelley to wait with Dover where they were and then “immediately got off the phone.”

But The Reveal has learned the police chief didn’t call for medical help either.

He got on his police radio and asked his sergeant to call him on the phone – at home.

The Reveal discovered it would not have been unusual for the chief to call the 911 center directly for police, fire and ambulance to head to the scene. He had done so dozens of times in the past for a variety of things – including cases involving damage to property, location checks, etc., according to Polk County 911.

The sergeant says the police chief told him there was a possible accident and that he should go talk to the state representative and the driver who were now closer, in a parking lot across the street from the scene.

Eric was lying in the ditch alone, in excruciating pain. By the time the police sergeant got to the area and notified EMS, it was just over an hour after the crash.

Polk County 911 told The Reveal, had they gotten the 911 call as soon as the crash happened, they could have been at the scene within five minutes.

While looking around the scene, the police sergeant found Eric’s hat. Then his red bicycle. And then about a hundred feet from the initial point of impact, according to information in the GBI autopsy report and on the police report, he found Eric barely breathing in the ditch.

That’s when EMS were notified to send an ambulance to the scene.

The crash happened at 8:25 p.m., according to records obtained from the Georgia State Patrol. EMS wasn’t notified until 9:29 p.m. The first unit arrived at the scene at 9:31 p.m.

“But by this point in time, we missed the golden hour,” Brazier said, explaining that, if a trauma patient can get into a trauma setting within an hour, their chances of survival changes dramatically. It improves.

“May turn out to be fatality. It’s not yet but may turn out to be. They’re working on him,” sound from the radio traffic continued. Moments later, “patient went full arrest.”

At that point, it was too late. Officers canceled their request for a medical chopper to take Eric to a level one trauma center.

“If Polk 911 had gotten this call like it should have gotten…this boy might still be alive today,” Brazier said. “This mess here stinks to the high heavens. This reeks of the good ole boy."

“My brother was cheated out of life…It’s just something out of a nightmare that you wouldn’t believe that would happen. That nobody would do nothing," said Aaron.

No arrest, no accountability

The Polk County coroner believes someone could have saved Eric. On his death certificate, Brazier wrote that Eric died by "homicide" in a "hit and run" crash.

But months since his death, there hasn’t been a single criminal charge filed in the case.

Not for a hit and run. Not for leaving the scene of an accident. Not for any of it.

Dover hasn’t responded to our requests for an interview. We talked to his parents who say the 37-year-old didn’t have the mental capacity to call 911 so he called the last person he was with – Representative Kelley.

The family has not shown The Reveal any medical documents showing a diagnosis of a mental illness.

Eric's family responded saying if his parents believe Dover doesn't have the mental capacity to make life or death decisions, he shouldn't be behind the wheel.

Representative Kelley told The Reveal in a statement that Dover thought he may have hit a deer.

We caught up with Kelley at the Georgia State Capitol to elaborate.

Before we could ask our questions, Kelley said, “I’m a potential witness in an ongoing matter, it would not be proper for me to comment any further.”

“Why didn’t you call 911 or ask your friend to call 911?” Reveal Investigator Faith Abubey asked.

“You called the police chief - at home,” Abubey replied.

“Again, because I’m a potential witness, in an ongoing investigation…”

This is the first statement Kelley sent us after we spoke to him at the capitol.

"On September 11, 2019, a bicyclist tragically lost his life when he was accidentally struck by a Polk County resident on Highway 27 in Cedartown at night near the Dollar General Market. The citizen thought he may have hit a deer, but upon my arrival at the scene, I determined it best to call the police to investigate. The bicyclist was found 20’ off the roadway in heavy brush. This has been a traumatic accident for everyone. Out of respect for everyone involved and ongoing investigations, no other statements can be given at this time. My prayers go out to everyone impacted by this accident."

The day after our investigation was published, Kelley sent us a more lengthy statement.

"It is heartbreaking that our community has experienced a tragedy like this. Our thoughts and our prayers go out to the victim and the families involved. After getting messages from so many, I wanted to tell my story regarding the evening of September 11, 2019.

That night I received a call from a Polk County citizen who I had seen earlier in the night at the Polk County Fair. This individual worked at a local supermarket, is well liked and is known to have limited mental capacity. He was agitated and upset because he had been involved in an accident and thought he may have hit an animal with his car. After trying unsuccessfully to calm him down and find out what he may have hit, I still had no idea what had happened. At that time, I felt the right thing to do was to go to his location to try to find out what had happened. So, I put my boots back on, and got in my truck. After arriving and driving up and down the road, I saw nothing that indicated a life or death situation, but when I saw a bike located in the ditch off the right side of the roadway, I felt the right thing to do was to call the police and that is what I did. At that time, I still did not know another human being was involved. I fully cooperated with law enforcement at the scene and in the on going investigation as a witness and will continue to do so."

Will anyone be held accountable?

When The Reveal met with Chief Newsome at the Cedartown Police Department, he said, "well, certainly not trying to be rude,” he began while standing outside his police department. “But it is an ongoing investigation. So, I’m not at liberty to discuss any of the details of the investigation.”

“So, you’re not able to explain why you didn’t call for medical services right after you found out a person might have been hit?” Reveal investigator Faith Abubey asked.

The Georgia State Patrol is currently investigating the cause of the crash. It's unclear if they are also investigating what happened after.

For now, a life cut short and a grieving family left with no answers.

“I’m not going to allow this to go on, on my watch. I don’t care and I want to make it very clear, I’ll send whoever behind bars before I see this covered up,” Brazier said. Adding, “I used to have a great deal of respect and admiration for all three of these individuals. And, I, yes, considered them [Rep. Kelley and Police Chief Newsome] friends, but no more. I cannot and I will not tolerate this type of behavior.”

Aaron just wants to know who will be held accountable?

“I just have one question: what was more important than my brother's life? He was a good brother. He was a good person,” Aaron said before breaking into tears.