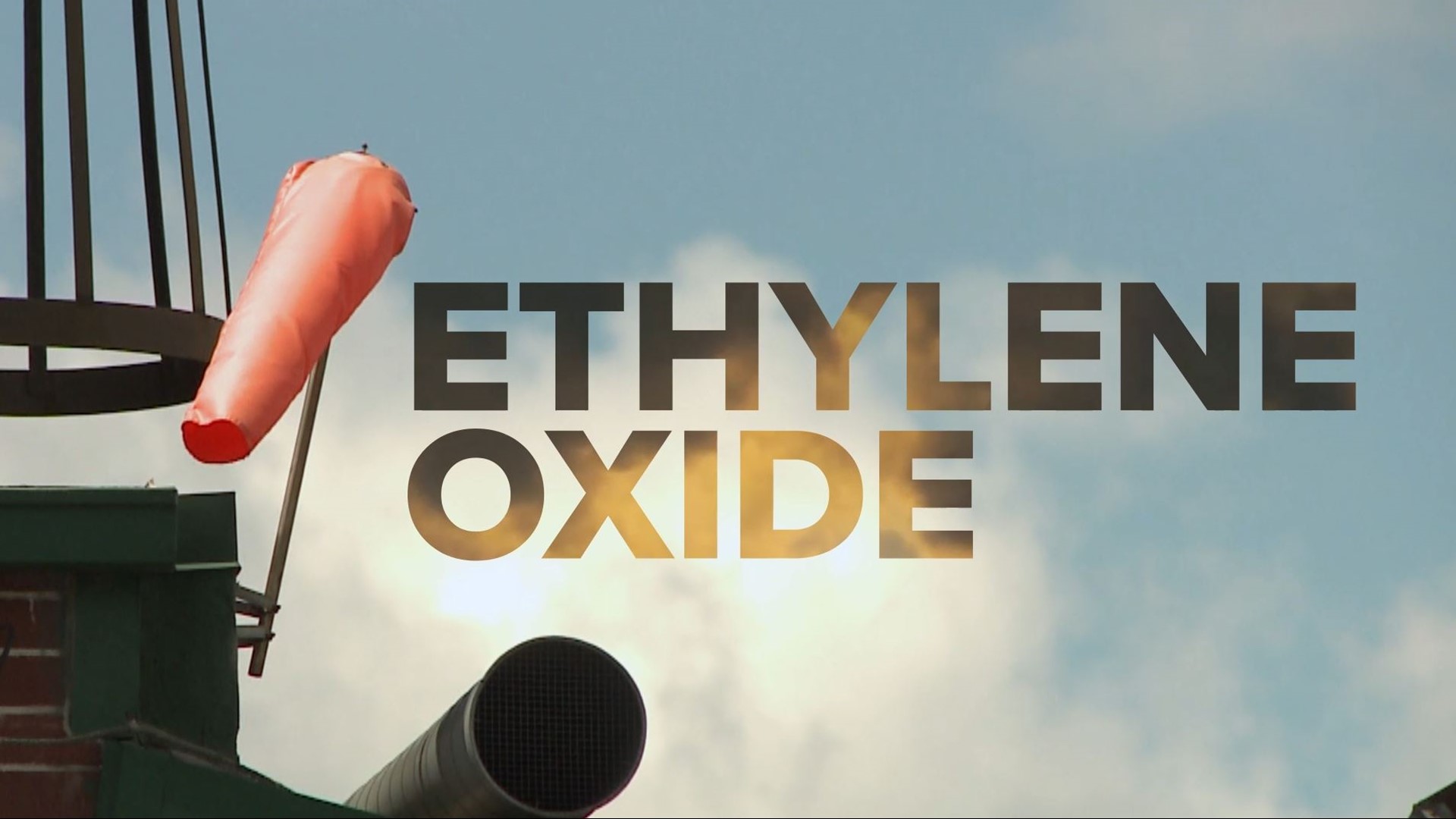 ATLANTA — The medical device sterilization industry in Georgia is under intense scrutiny after residents living around metro Atlanta plants discovered a gas it uses causes cancer if exposed to it for long periods of time.

The gas is ethylene oxide. It’s toxic, but a very useful chemical in sterilization and production, like making cleaning products.

While most of the discussion involving the gas has focused on its potential health risks, The Reveal uncovered another threat. It’s highly explosive.

In 1962, a tank containing thousands of gallons of ethylene oxide exploded in Brandenburg, Kentucky. News reports from that day say one employee died.

Details of the explosion are unclear. The Environmental Protection Agency did not exist at the time and an agency spokesperson says there are no records available.

The current mayor of Brandenburg, Ronnie Joyner, says the plant was owned by the Olin Corporation at the time. His father worked at the facility.

“I remember the explosion. I believe a second worker died at the hospital a few days after it happened,” Joyner said.

Video recorded shortly after the blast, and now posted on YouTube, shows the plant heavily damaged as well as nearby homes.

More recently, a chamber containing 100 pounds of the gas exploded at a Sterigenics Plant in Ontario, California. According to the U.S. Chemical Safety and Hazard Investigation Board (CSB), the August 2004 blast injured four workers and blew off a two-ton door, sending it 75 feet away.

“This was an incident involving a chemical that is both highly flammable and toxic to humans. It was fortunate that no one was in the immediate vicinity of the explosion, because it would have been more serious injuries and possibly fatalities,” said CSB Board Member John Bresland, in a video produced by the agency.

CSB blamed the incident on human error; a chamber which did not have a gas monitoring system and lack of employee training.

Janet Rau is president of Stop Sterigenics, a grassroots organization concerned with ethylene oxide and named after a medical sterilization plant in Atlanta.

While most of her efforts have focused on eliminating emissions, she worries about the potential impact to Cobb County if the plant had a catastrophic event.

“It hasn’t really been disclosed to us what type of damage might be expected. Those are documents the government has,” said Rau.

The Reveal obtained some of those documents from the EPA. The records are identified as risk management plans or off-site consequence analyses, which detail worst case scenarios if the gas caused an explosion.

It’s sensitive information typically held under lock and key for security purposes. The federal government does not allow the public to make copies, but people can schedule an appointment to view the records in person and take hand-written notes.

The Reveal Investigator Andy Pierrotti took detailed notes from the documentation. We are sharing those notes because of the potential impact to nearby communities and the public’s concern of ethylene oxide.

We reviewed worst case scenario records for three facilities which use ethylene oxide. The Sterigenics plant in Atlanta; Becton Dickinson (BD) in Covington and the Stepan plant in Winder.

At Sterigenics, the EPA predicts a blast would extend more than half a mile from the plant, impacting 744 residents and nearby commercial buildings.

If an explosion happened at BD in Covington, the EPA estimates an explosion would also reach about a half mile. Federal records show the impact could affect 420 residents, including at least one school.

The impact at Sterigenics and BD includes a scenario if 400 pounds of ethylene oxide exploded, even though both companies typically store thousands of pounds of the gas on-site.

BD stored about 10,400 pounds of the gas at its plant last year. According to the company, it now keeps less than 10,000 pounds on site, which means it no longer has to file a worst case scenario risk mitigation plan with the EPA.

► WATCH | UpLate at 11 p.m. on 11Alive Tuesday for more on this investigation

“We have technology that measures gas levels within our sterilization chambers. And, if there were ever a situation where the gas level could to get to the point where there could be a fire or explosion, everything shuts down automatically,” said Kirkpatrick.

The biggest disaster would likely come from the Stepan Company in Winder. It uses ethylene oxide to make products like washing detergent. Last year, Stepan used 9.3 million pounds of the toxin.

That amount appeared to surprise Karen Hays this past August. She’s the air protection branch chief at Georgia’s Environmental Protection Division. According to internal emails obtained by The Reveal, Hays asked a colleague to make sure Stepan’s ethylene oxide usage was correct. When it was confirmed, her response was, “Wow.”

If a blast happened there, EPA records show the impact would stretch 11 miles into Barrow County and affect 223,578 residents.

“From what we understand about ethylene oxide it would be a pretty darn big hole in the ground,” said Rau.

Phil MacNabb is the president of Sterigenics. At a town hall meeting this summer, he also believes his company has the technology in place to prevent such a blast.

It’s not clear why the EPA only allows companies to account for a small percentage of the ethylene oxide facilities actually store, but it does admit there are limits on what control technologies can be considered in doing worst-case scenario modeling.

“For example, a source cannot account for any active mitigation technology (e.g., stuff that relies on power or human activation to work) when modeling a worst case event. Generally, you assume everything you put into the largest vessel or pipe is released,” said Dawn Harris-Young in an email, an EPA spokesperson.

“Administrative controls mean procedural controls that the source uses to limit the quantity. For example, if the source never fills a vessel more than 90% full, they can limit the worst case quantity to 90% of the vessel capacity,” she added.