Programs created to help students catch up after 178 educators were implicated in delaying their education by changing test scores, have largely missed their target.

ATLANTA -- Erika Heard’s back is turned to the camera as she furiously ruffles through an old box.

“I keep everything. My ultrasound pictures, the day they started walking. All the accolades from school,” she said through a smile. “We’ve come a long, long way.”

Time has tried to make the mother of four forget about a lot. But the mementos she’s kept hidden in boxes over the years are occasional reminders. Like the long-faded report cards she’s now holding.

“I have them all so I can keep up with them. So, when they become famous, these are going to be archives,” she said chuckling.

Two of Heard’s children, Christopher and Eric, were in elementary school when she found out they were among the more than 3,500 students identified as victims of the Atlanta Public School cheating scandal.

“For me, as a parent and a person that went to APS, it really was something that hit me in my heart,” she said. “[Christopher] was not meeting standards but he was passing the [CRCTs]. He had C's. The numbers didn’t add up.”

Heard said her kids were about two grades behind their classmates in reading and math despite what the standardized end of grade tests showed.

“It was a very sad chapter in Atlanta’s history. Particularly, public education history. And, it didn’t have to happen,” former prosecutor Bob Wilson said.

It was his and his team’s investigation that implicated 178 APS educators in the cheating scandal. 35 were indicted, twelve went to trial and 11 were convicted.

“It varied from teachers giving the students the answers, to individuals changing tests when they turned the tests in late," Wilson said. "It dealt with groups of teachers meeting after school, changing scores, it dealt with people getting the answer sheets in advance.”

And students paid the price.

Video from the months-long trial includes one of a 17-year-old, in 11th grade at the time, who told the court she was several grades behind her classmates.

As part of a media agreement with the court, the teen was not named but did take the stand in this case.

On average, researchers at Georgia State University found students affected by the cheating scandal lost a lot up to half a year’s worth of learning in certain subjects.

Former Governor Sonny Purdue even choked up in court at the thought of it.

With the country’s eyes on Georgia, local leaders made promises. They’d make the kids whole.

One of those promises turned into a program called Target 2021. The number represents the year the last impacted student would graduate from high school.

“Doing nothing was not an option,” Deanna Rogers said.

For the last year, she has been the APS Target 2021 Remediation and Support coordinator. Working out individual attention for the affected students. The program has provided services like tutors, counseling, academic support, and other help outside the classroom.

But a new report by Georgia State concludes that after five semesters, “the effect of Target 2021 participation on attendance is zero. [It] had no effect on students’ grade point average in core academic subjects and the 9th-grade Literature exam fell between spring 2015 and spring 2018. The drop was slightly larger for the Target 2021 participants.”

In other words, the program has failed to hit its target. 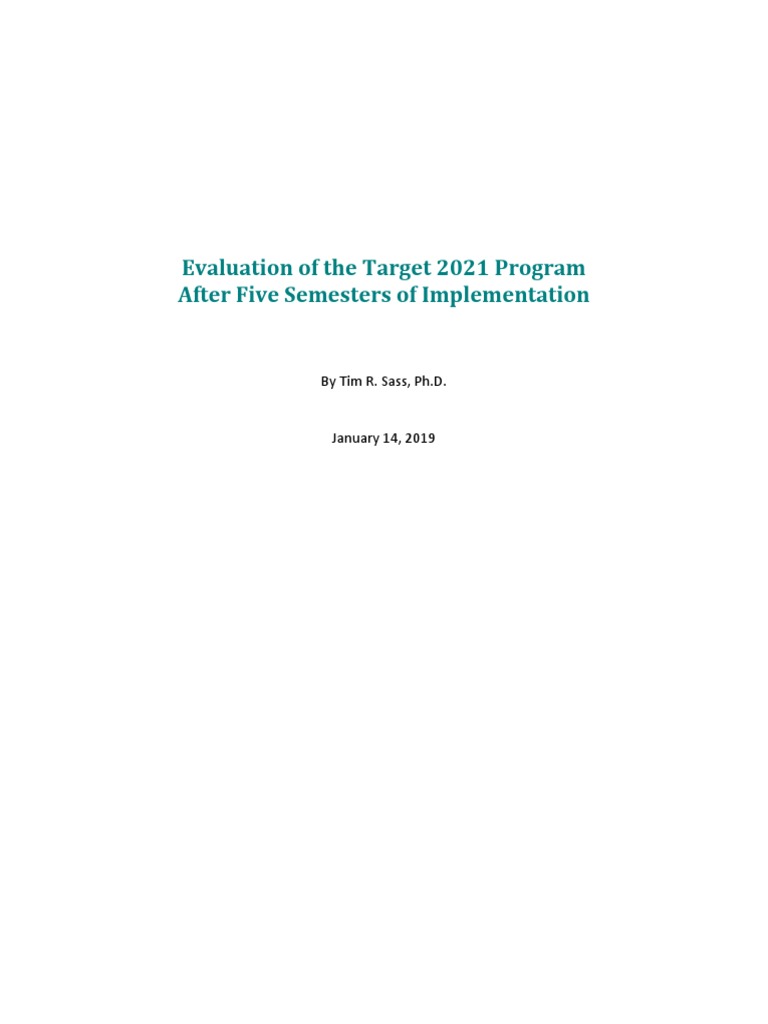 Target 2021 Evaluation Report (Tim R. Sass Ph.D. January 14 2019)
After 178 Atlanta Public School educators were indicted as part of a cheating scandal, thousands of students were identified as behind in their studies because of the teachers actions. Programs were created to help the students catch up, but a recent report shows the program failed.

The Reveal Investigator Faith Abubey: Has APS once again cheated its students, if the program that was supposed to help them has failed?

Rogers: Well, the program has helped out students. If you look at [the] study, it shows that there wasn’t a statistical difference. Doesn’t mean that we weren’t making gains, it’s just either the results were the same or it wasn’t statistically enough to make a difference.

The Reveal Investigator Faith Abubey: In the face of all of this, what researchers have done, how can you say the program is working?

Rogers: Overall, we may not be getting those huge numbers but we have individual students and schools that are benefiting from the program.

The Reveal Investigator Faith Abubey: So you’re happy with what the program is doing?

The Reveal has also uncovered that there was another program.

Redemption Academy was to target the other 3,500 students who had already graduated APS when the cheating came to light. But our investigation found the Fulton County District Attorney’s Office never even got the program off the ground.

“When we started with what we thought was a noble idea, we did not realize how really difficult it was,” Howard said, adding that they realized they needed a lot more money than they thought  – more than $30 million.

He said, more importantly, they couldn’t find the people they were supposed to help.

Abubey: Do you take any responsibility in that?

Howard: I wish that I could have done a better job even though I’m not an educator. I’m a prosecutor. I could have done something to help those children. It is clear that those students suffered. Something should be done. I think something should be done today - to go back and help them. But that is not, it seems, that the public interest might be.

Abubey: Do you have any intentions of actually creating this program or continuing to attempt to create it?

Howard: Well, maybe after your news story, maybe it might happen.

For now, this was a failed promise and a missed target. But Rogers said APS isn’t giving up yet.

“We will not stop until our students are successful,” she said.

The data might not show it, but she said parents and students are satisfied with the extra help their kids are getting in and outside the classroom because of Target 2021.

Heard and her son Christopher are prime examples.

“I think it’s done exceptional for them. Especially my children,” Heard said.

“Before, I was making C's and now I haven’t had a C in high school at all. It’s great. With all the help that I’m getting. My future, it’s going to be successful,” he said Whitaker.

A fair chance? Not all Georgia teachers certified in the subjects they teach

Schools shootings, can we talk our way out of the problem?