New details have been revealed in the death of a man at the Cobb County jail from records the sheriff's office tried to delay releasing to the public. 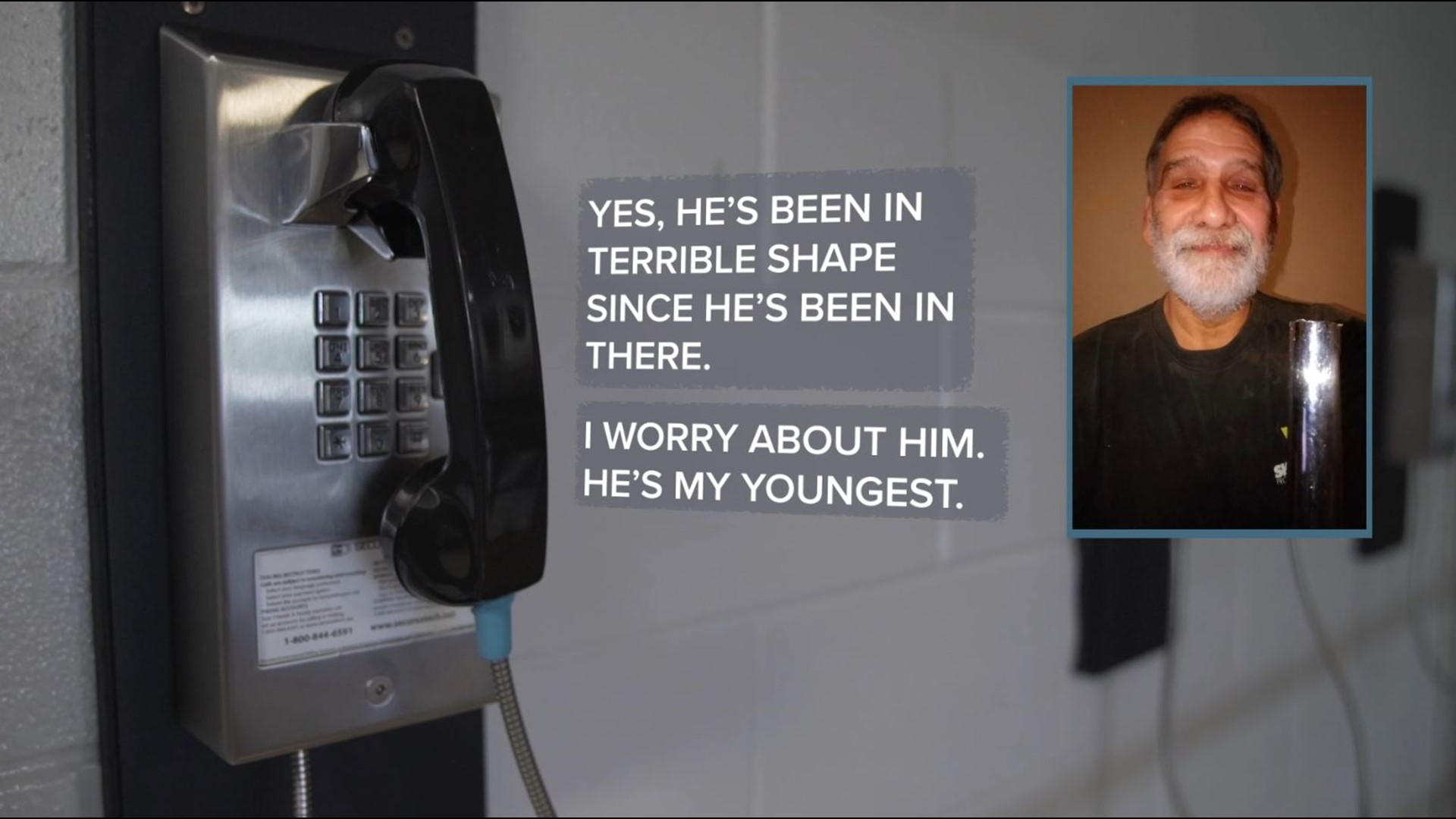 This time, the concerns come from the family of a former inmate who said jail staff knew their son suffered from mental illness, repeatedly threatened to harm himself and had a history of not taking his medicine. That inmate ultimately committed suicide while in custody.

An internal investigation found jail and medical personnel did nothing wrong. But the family believes the department had an obligation to protect him while he was in their custody.

When deputies took Bradley Emory into the detention center in December 2018, it didn’t take long for staff to realize the 33-year-old father could potentially hurt himself.

According to an internal affairs report from the sheriff’s office, a jail staffer noticed two visible cuts on one of Emory’s wrists the day after he was placed into custody. He told the employee that “he cut his wrist a couple of months ago when his wife threatened to leave.”

In recorded phone calls provided by the sheriff’s office, Emory’s father, Don, warned deputies multiple times that his son threatened to harm himself and was in poor mental health.

“I’ve got a son in there. Since he’s been in there, I’ve had to call several times and have him on suicide watch because he’s threatened to hurt himself,” Don said during one phone call.

Jail staff placed Emory under close observation at least two times for threating to hurt himself. Each time, mental health counselors allowed him to return to the general population after signing a safety contract promising not to kill himself.

On Valentine’s Day 2019, jail staff found a rope made out of a torn mattress cover in Emory’s cell. The deputy asked Emory why he had the rope. "That was a couple of weeks ago," Emory replied. "I'm going through it."

Detention staff appeared to have interpreted Emory's reply as "I'm going through [with] it," hinting he may hang himself, because the jail immediately placed Emory under close observation.

But less than a month later, a fellow inmate discovered Emory in a shower with a bedsheet tied around his neck. Emory died three days later at the hospital.

In a suicide letter left for his wife, Emory wrote, “This is my last letter. My days are filled with painful misery and my nights consumed by horrible nightmares.”

According to Emory’s family and jail documents, detention employees knew Emory once suffered a traumatic brain injury, which triggered PTSD and depression.

The brain injury occurred while detained in Hall County’s jail in November 2009. According to incident reports, a fellow inmate attacked Emory by kicking him in the head several times while he was on the ground.

“Once the CT scan was completed, inmate Emory was returned to the emergency room where he was advised that he had suffered a brain injury and would require surgery to correct the problem,” the Hall County Sheriff report detailed.

Emory’s family said doctors implanted steel plates in his head during the surgery. At the time, Emory was in custody for theft and felony gun possession.

While in Cobb County’s Detention Center, a doctor prescribed Emory multiple antipsychotic medication, like Prozac and Vistaril, but he did not always take his pills. According to Emory’s medical records, he declined to take Prozac at least 42 times over three months.

"He was a troubling inmate. He had issues, family issues,” Deputy William Sigmund said in an interview with an investigator after Emory's death.

At the time of his death, Emory was in custody for felony drug possession. During his 86 days in custody at the jail, Emory called his family 4,979 times.

It became such a problem, his father once asked the jail to prevent his son from calling. During one contentious conversation with his son, the sheriff's office said Emory's father essentially dared his son to end his life, not thinking he would actually follow through.

Six months after Emory's death, the sheriff’s office completed its internal affairs investigation. It ruled jail and medical personnel did nothing wrong.

“All detention staff appeared to have performed their duties as required and expected during the medical emergency and throughout Inmate Emory’s recent incarceration at the Cobb County Jail,” the report said. “Furthermore, WellStar Medical Services appeared to have performed the duties expected in relation to Mental Health monitoring and physical health monitoring and treatment for Inmate Emory.”

Emory’s family disagreed. They said they do not believe the detention center did enough to keep him safe.

Sheriff Neil Warren, who runs the jail, declined an interview with The Reveal, but sent a statement in reference to Emory's death.

In the statement, the sheriff claims every time staff members were notified of a suicide risk, "jail staff took appropriate action."

"On each occasion, Mr. Emory was either checked on and spoken to by jail staff where no admission of thoughts of self-harm were made and/or no marked changes in his behavior were noted or he was placed in close observation, and was only returned to his regular housing unit after being seen – and cleared – by trained mental health providers," Warren said.

Mawuli Davis, the family’s attorney, believes Emory provided jail staff clear signs for months that he would likely kill himself if given the opportunity. Davis said he believes the county failed to do its job.

“If someone has gone as far as create a rope with sheets, that should be taken seriously and that did not appear to have happened,” Davis said.

Since 2004, at least 14 inmates have committed suicide while in custody at the detention center.

Jail records outlining the details leading up to Emory’s death were not voluntarily provided by the sheriff’s office.

The Reveal filed an open records request for copies of Emory’s case file in August, but the county refused to produce the records. It claimed the sheriff re-opened the case and that state law allows the agency to withhold public records until the investigation is complete.

Days before the sheriff’s refusal, The Reveal published an investigation about another inmate death in 2019. It included video of an inmate named Kevil Wingo experiencing a medical emergency. According to interviews with jail staff, Wingo begged to be sent to the hospital for hours after experiencing abdominal pain and difficulty breathing. He later died alone in a padded room.

11Alive filed a lawsuit against the sheriff claiming the sheriff's office violated the state’s open records act in “an effort to shield thousands of public (and potentially damaging) records from disclosure in an election year.”

A judge ordered the sheriff to produce Emory’s jail records.

No state agency in Georgia keeps track of the number of people who die in county jails. Some jail deaths are investigated by the Georgia Bureau of Investigation, but that only happens when local law enforcement requests its assistance.

The rest are investigated by the same sheriff offices that are often accused of neglecting their own inmates.

State Representative David Wilkerson said he plans to introduce legislation that would require an outside, independent investigation into all jail fatalities

“This is really about jails running safe and making sure that people have their day in court, then you’d want that independent investigation,” Wilkerson said.

A total of 217 people have died in Fulton, Gwinnett, DeKalb and Cobb county jails since 2004. Out of those 217 deaths, only one of those deaths were investigated by GBI.

“I mean, in no other industry do we expect people to investigate themselves. And then, in a death, something as serious as a human life, and you think it is acceptable for you to investigate yourself?” Davis, the family attorney, questioned.

Was it foul play?

While Emory’s family believes the Cobb County detention center staff largely ignored his mental illness, they say there are potential clues that something more sinister may have happened.

While in custody, Emory either initiated a fight or was the victim of at least five altercations between other inmates.

“One of the guys he was fighting with in the report says that that guy was pacing around out of breath when he found my brother hanging,” James said.

There is no surveillance video of Emory entering the shower area before his death, because it doesn’t exist. According to jail records, “there are no cameras within in the Romeo pod,” where Emory was in custody.

Coincidentally, the camera typically pointed in the direction of the Romeo pod entrance “was down and not recording.”

Just hours before his death, Emory left his brother a 40 second voicemail. Emory sounded desperate to get out of jail, but in a good mood.

"I love you dog. And, get me out of here bro,” Emory said in the voicemail. It was the last call he made to his family before an inmate found him hanging in the shower.

Cobb County investigators found no evidence a crime was committed.