After dozens of scans, surgeries, and procedures, 17-year-old Jack now lives with staples inside his chest holding his lungs to his rib cavity. 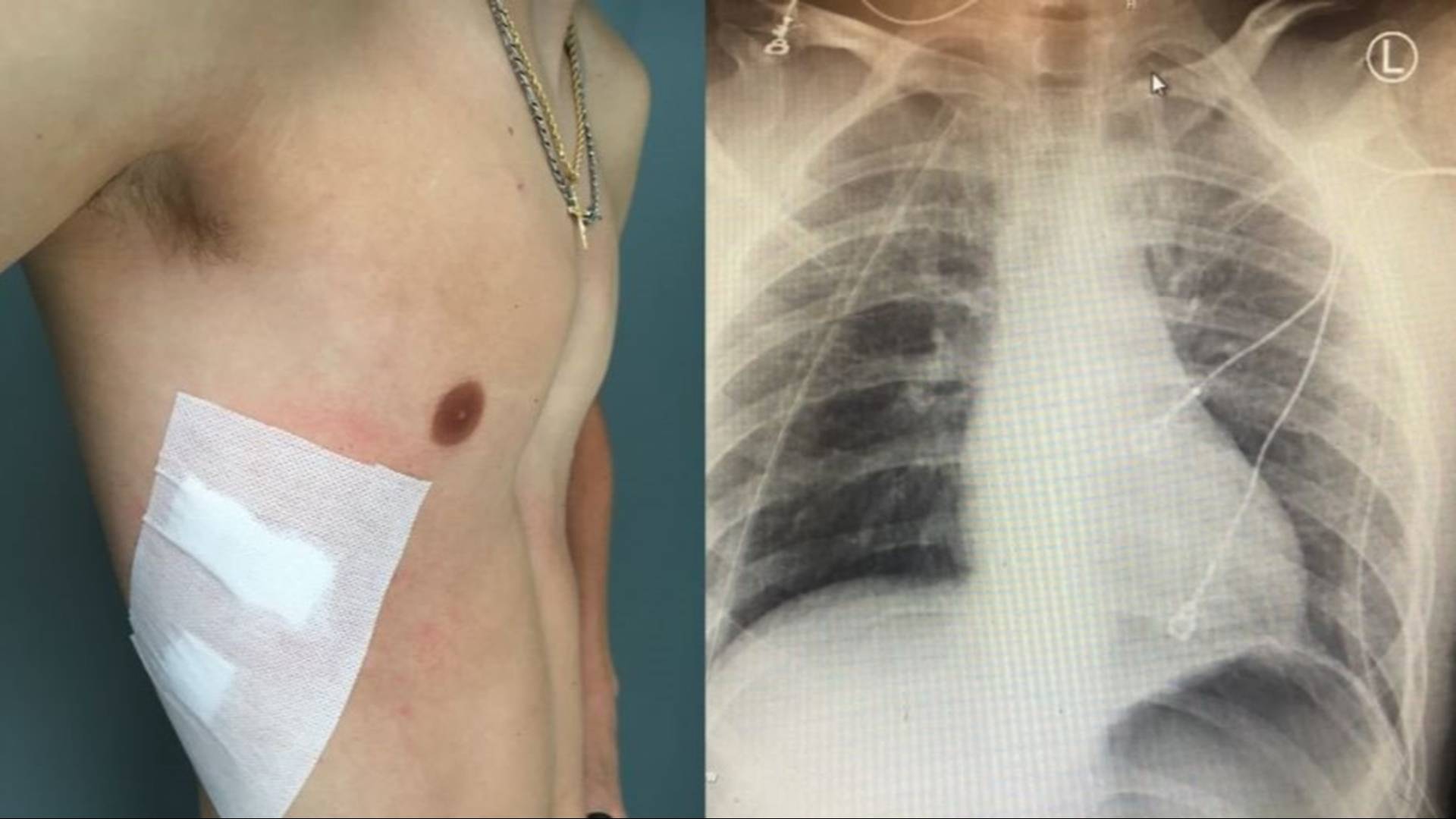 Note to parents: At the bottom of this story, we've included a vaping guide, including signs of vaping, teen vaping lingo, a parent helpline and how to talk to you kids about e-cigarettes.

It was Fourth of July weekend when Amy’s son first expressed concerns. They were out on the lake and he found himself struggling to breathe. For privacy, we are not using their last name and referring to her son as Jack.

“I’m short of breath and I feel like I’m having a heart attack,” he said. “I’m like, oh, you’re 17 years old!” responded his mom, a wound care nurse at Northside Hospital Forsyth.

Amy said she listened to his heart and lungs and wrote his discomfort off as a minor respiratory infection. But the next day she stood in her own emergency room, watching as Jack struggled to breathe.

“The doctor says, his lung has collapsed,” she recalls.

The next four days were a blur of tubes and chest x-rays, but his lung would not expand.

“So, the cardiothoracic surgeon came in and says to my son, have you been vaping?”

That’s when Amy says she learned for the first time her son had been hiding his habit for more than a year, waiting until she left for work to pull out his vape.

Jack had been hitting it hard for the past six months, vaping one pod every two days. The habit was costing him more than $30 a week.

It was also when she learned why her son was acting so strange. He was going through nicotine withdrawal.

“He was sweating, shaking. He said he felt like he was coming out of his skin with anxiety,” she remembers.

Stable, the hospital sent her son home to recover. But less than 24 hours later he was back in the emergency room. Before his left lung could completely heal, his right lung had collapsed.

To save his life, doctors rushed to pry his ribs apart and insert a breathing tube into his chest. Amy could hear him scream in pain.

“I felt like this was a nightmare, it was a never-ending nightmare. How can this be?”

Doctors have seen a lot since then. Remember, this was July. The crisis didn’t trigger the Centers for Disease Control to open its emergency command center until September.

Dr. Justine Henao testified before members of Georgia’s Health and Human Services committee this fall about what she had experienced as an internal medicine doctor at Northside Hospital Forsyth. Henao said she has seen four teens with collapsed lungs come into the emergency room in just two months, a statistic unheard of in her 12 years there.

Amy said her son is angry with the manufacturers and the government for not knowing more about the dangers of vape products and not doing more to keep them away from teens.

In May 2016, the FDA classified vaping devices as “tobacco products” and made plans to regulate them, requiring e-cigarette companies to provide research showing their products were safe.

But those regulations kept getting delayed, even as the number of people, especially teenagers, started to vape. This year, the CDC reported 25 percent of high school students in the US had tried e-cigarettes within a month of the study.

RELATED: 'The ability to do more': State rep vows to join the fight against deadly vaping illness

“We run the risk of reversing the impressive gains we made in terms of tobacco cessation over recent decades by this resurgence of youth use of e-cigarettes,” said Ned Sharpless, the FDA’s acting Commissioner.

In 2019, a lawsuit led a Maryland federal judge to set a deadline of May 2020 for manufacturers to come into compliance.

“Given the uncertainty in the efficacy of e-cigarettes as smoking cessation devices, the overstated effects that a shorter deadline may have on manufacturers, the industry’s recalcitrance, the continued availability of e-cigarettes and their acknowledged appeal to youth, and the clear public health emergency, I find that a deadline is necessary," wrote U.S. District Judge Paul W. Grimm.

Internal emails obtained by The Reveal from a congressional oversight subcommittee show Juul paid up to $134,000 to gain access to students in states like California, Maryland and Arizona. The subcommittee characterized the company’s efforts as a "sophisticated program" that "targeted teenagers and children, as young as 8 years old.”

In one instance, according to testimony before Congress and a memo compiled by staff, Juul representatives told students their product was “totally safe" and "even demonstrated to the kids how to use a JUUL."

Some of those students testified on Capitol Hill.

“For my classmates who were already vaping, it was a sign of relief, because now, they were able to vape without any concern,” said Caleb Mintz, who told lawmakers he was in ninth grade when Juul came to his school. “Now they thought it was just a flavor device that didn’t have any harmful substances in it.”

In response, a Juul spokesperson said, "We never designed our marketing to appeal to youth. That is why we are focusing on taking aggressive actions to reduce the access and appeal of our products."

Those actions, according to the company, include suspending all advertising in the U.S., and implementing new technology in stores that automatically restricts the sale of Juul products until a government-issued ID is electronically scanned.

But for Jack, and so many others, the damage is already done.

According to the Centers for Disease Control 48 people have died from a lung injury associated with vaping as of December 4.  2,291 people have been hospitalized, the youngest patient, just 13 years old.

Jack says he never bought vape juice with THC and always purchased his pods from traditional retailers. But he admits to sharing vapes with friends and co-workers to try out new flavors and additives. He never thought to ask what was in them because until this summer, he thought vaping was safe.

“I think he has PTSD from it. He stayed in the hospital for 11 days. He had over 15 chest x-rays. He went through surgery, bi-literal lungs. Not to mention the cost. My medical bills are over $180,000,” said his mother.

Jack’s lungs were covered in blebs, blisters caused by the heat from the vapor sitting at the top of his lungs. When they pop, air can escape into the space between the lung and chest wall.

To protect against future collapse, Jack had the tops of his lungs stapled to his chest wall. Tall and thin, Jack says the staples are a painful reminder of what he experienced. He also feels discomfort lifting his right arm, restricting some of the activities he loves.

His mother worries about the health impacts of having staples in his body for a lifetime. But it’s thinking about night before his surgery, that almost brings her to tears.

The Partnership for Drug-Free Kids compiled a guide for parents on how to know if your child is vaping nicotine liquid or THC, and what to do about it.

The following is an excerpt from their guide: What are the signs of vaping?

Equipment: You may find devices that look like flash drives, e-juice bottles, pods (that contain e-juice) or product packaging. Aside from leaf marijuana, gel jars that contain dabs, small tools to scoop dabs and cartridges that contain THC oil are signs of vaping marijuana.

Online purchases / packages in the mail / store purchases: Be on the lookout for purchases made online and charged to your credit card or unusual packages that arrive in the mail. Kids also buy them at big box stores, gas stations or from other friends.

Scent: While the smell from vaping is faint, you may catch a whiff of a flavoring where there appears to be no other source. For example, if you smell bubble gum or chocolate cake, take note.

Increased thirst / nose bleeds: Some of the chemicals used in e-juices have the effect of drying out the mouth and nasal passages. As a result, some kids drink more liquids or seem more prone to nose bleeds.

Decreased caffeine use: Some teens and young adults develop a sensitivity to caffeine. If your child drank caffeinated energy drinks and quits, it may be as a result of vaping.

Vaping lingo: You may see vape lingo in text messages such as “atty” for an atomizer, “VG” for vegetable glycerin found in e-juice or “sauce” referring to e-juice. Kids often brag about their vaping exploits on social media. Look for pictures on Instagram or YouTube or check their Twitter accounts.

Appearance and behavior changes: Just like smoking, vaping marijuana can result in bloodshot eyes, dry mouth and thirst, increased appetite and shifts in behavior and mood. Sometimes, there is a noticeable change in friends and a decrease in activities that were once enjoyed.

Source: The Partnership for Drug-Free Kids