The Department of Labor said it's still getting a month's worth of claims each week. It blames Congress for the phone jam. 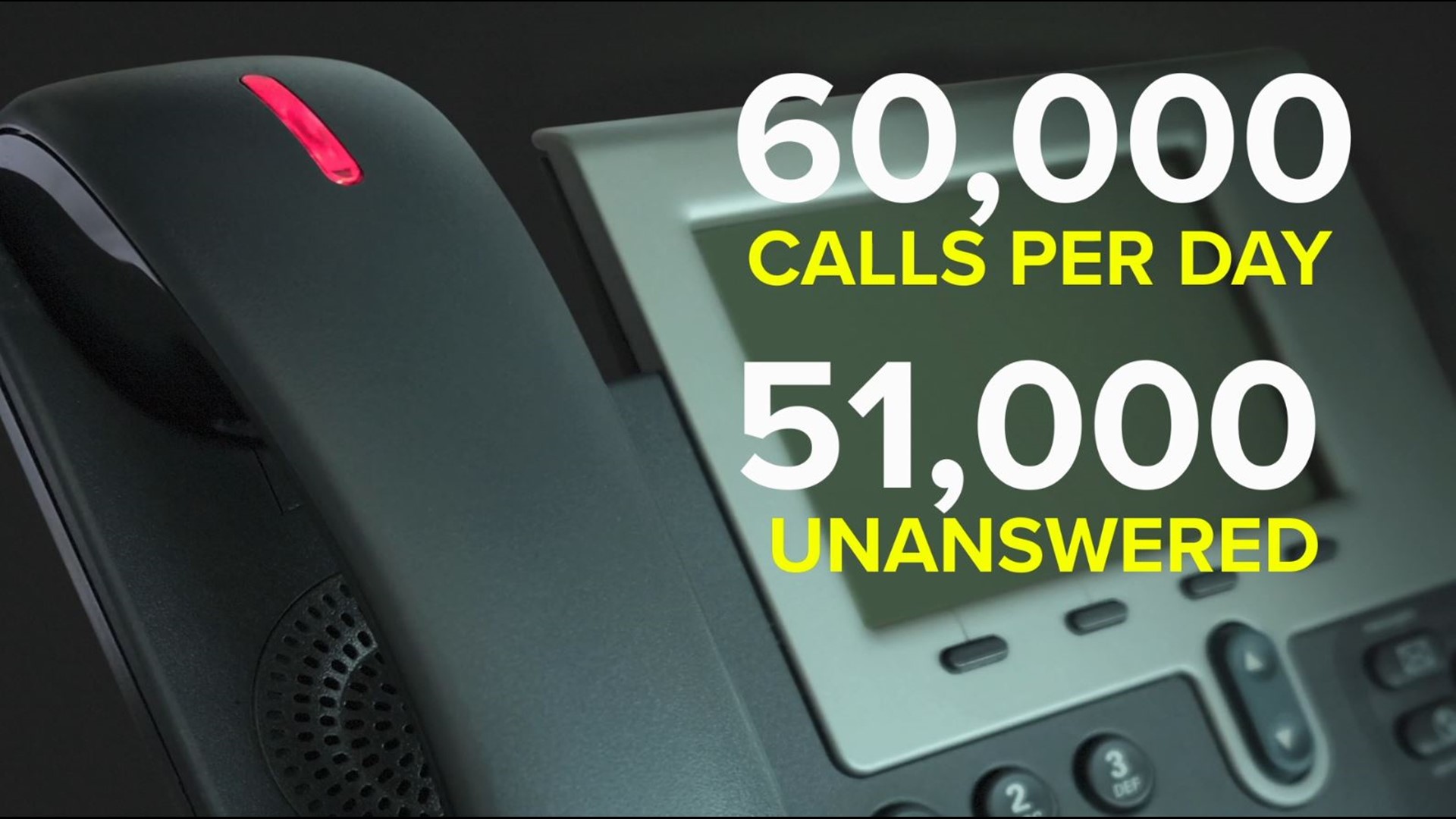 ATLANTA — You may never have tested positive for COVID-19, but chances are you have been financially impacted. More than four million people filed an unemployment claim in Georgia last year. That loss of work created an unimaginable job for those at the Department of Labor (DOL), people like Stacey Jones.

As we talked with Jones outside the DOL building in downtown Atlanta, she sat soaking up the sun. She hasn’t spent much time in it this past year.

“Maybe in my car, it's coming through the window,” she said with a laugh.

Jones has had more overtime than just about any other state employee. To be exact -- 1,461 hours of overtime.

If you are experiencing issues with your Georgia unemployment claim, scroll to the bottom for resources

But months have now dragged into more than a year. Jones is the Tax Administration Chief. That’s the office that deals with the employers. But during the pandemic, she’s been asked to deal with the employees too.

“The phones ring off the hook daily so we’re answering calls all day, emails, responding to voicemails," Jones said.

Someone posted her email and phone number on social media, so she gets 100-200 direct messages as well.

Several times a year, Jones travels west to see her family, relax on the beach and read. But this year, she’s barely seen the family living in her own home.

“We’ve had to give up simple things like enjoying an evening meal together," Jones explained.

11Alive's investigative team, The Reveal, pulled Georgia's overtime data for the past three years. Traditionally the state employees that performed the most overtime worked for the Department of Justice and Behavioral Health - correctional workers and home health aides.

In 2020, the Department of Behavioral Health ruled the list with 39 of the 50 top overtime earners. The highest in the state, a client support worker at a community integrated home, with 2,639 extra hours performed.

But 2020 was the dawn of something new. Last year, the remaining 11 listed in the top 50 were from the DOL, all with more than a thousand hours of overtime.

“There’s a lot of people here who haven’t taken a day off in a year. When I say a day off, I’m including Saturdays and Sundays,” Commissioner Mark Butler explained.

Butler is not sure when that will change. While the unemployment rate is dropping, the DOL still gets about 25,000 new claims for unemployment each week. That’s more than his office typically processes in a month.

“If you had told me that in basically one year’s time we were going to be required to pay out $20 billion in unemployment benefits I would have told you, you had lost your mind,” Butler said.

Only 15 percent of callers get through

But if you’re still the one waiting to get paid, you might feel a little - crazy. In just two weeks, 11Alive received nearly 200 emails from viewers struggling with their claims. Most stem around the inability to get in touch with someone at DOL to answer their questions or clarify what they feel is a mistake in their claim.

The Commissioner admits, only about 15 percent of the people who call, get through to someone who can help.

“That’s what happens when Congress puts 85 percent of the responsibility of financial relief on a department they’ve been underfunding for 10 years,” the Commissioner said.

RELATED: US jobless claims up to 744K as virus still forces layoffs

Butler claims it’s Congress that cast this shadow, approving complicated federal unemployment programs with no state systems in place to make the payments. Then it was Congress that allowed benefits to run out, without approving funding to back pay those who stopped receiving checks in the fall.

“They only said if you’re still unemployed come January, we’ll start paying you then,” he explained.

And now, Butler said 80 percent of the claims coming into his office are from people who quit or were fired. People who don’t traditionally qualify for unemployment but believe federal programs can still help.

“There’s been a lot of false information that’s been put out," Butler said.

Whatever the reason, with about 60,000 calls coming in a day, that’s 51,000 that go unanswered. And just in case there is a way to help some qualify for benefits, employees like Jones are processing the bulk of new cases by hand.

DOL has about 600 new employees to help process claims, but with a high turnover rate and a lengthy training process the phones may still be ringing for months to come.

When asked when the offices will reopen so people can try to discuss their claims in person, a spokesperson for the DOL said, "Until we get most of our frontline staff vaccinated, we do not plan to reopen. We're not going to endanger the lives of our employees to allow people into our offices, especially since 95% of the work that needs to be done right now is not done in our offices face to face. It can be done online or on the phone. The only reason somebody would need to come into our career center right now is to attend a workshop. We have suspended all in-person workshops for the present time."

A step to help or hurt?

State lawmakers, tired of hearing complaints from constituents, came up with their own plan to help. This past session, they voted to create a new position on par with the commissioner. The person will be appointed by the Speaker of the House and pull staff from the existing DOL workforce to conduct financial audits and respond to lawmaker’s questions.

"One of the challenges that my constituents have on a consistent basis and they're still having it, is lack of responsiveness. They felt like they were going into a black hole," Representative Todd Jones said during a committee meeting to discuss the bill.

“There’s not much of a balance of a personal and professional life anymore. It’s pretty much working all the time,” Jones said.