A state health inspector issued warnings that a Conyers nursing home wasn't doing enough to protect their residents from COVID-19, before the outbreak. 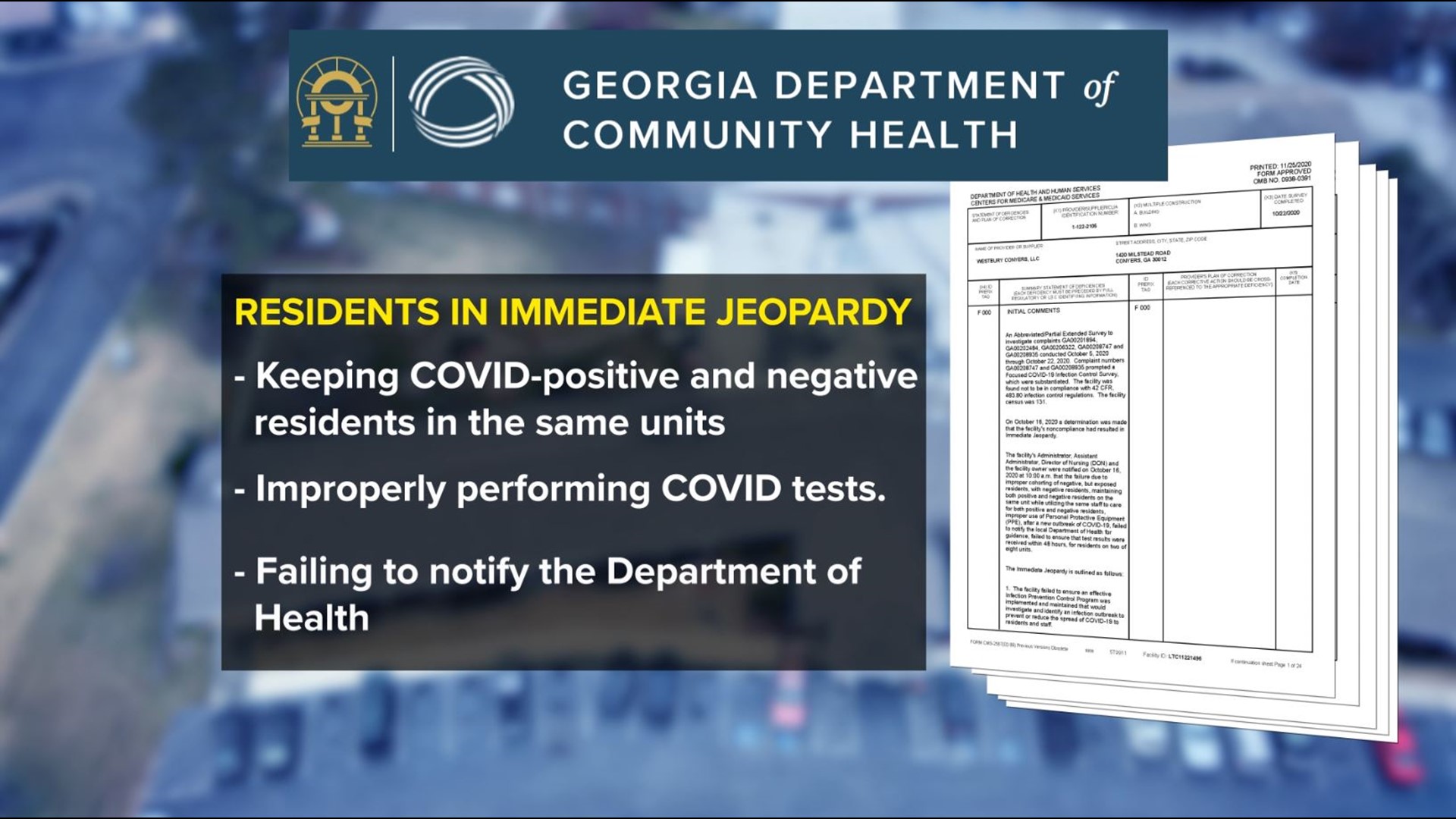 So far, nearly two dozen residents are dead, many more have been infected and a Reveal investigation uncovered actions taken by Georgia's governor early during the pandemic make it nearly impossible for families to attempt to hold the facility accountable in court.

Bessie Burden is among those who died at the Conyers nursing home. The 77-year-old grandmother lived at Westbury Nursing Home for seven years.

She suffered from diabetes and was wheelchair-bound, but her daughters said she remained active. The nursing home even crowned Burden "Ms. Westbury" two years in a row.

“She took that very serious. And her role was to go around to spread cheer to the other residents who could not leave their rooms,” Lashieka Mitchell, one of Burden’s daughters said.

When the pandemic hit, the social butterfly was forced to stay in her room. Mitchell, a registered nurse, made sure her mom followed the CDC guidelines. The two spoke by phone nearly every day.

"I can say whole heartedly mom did every single thing she could to stay safe. She even slept in her mask,” Mitchell said.

For months, Mitchell and her sister, Theresa Burrough, said they received weekly recorded messages from the nursing home’s administrator about the facility’s efforts to protect residents from COVID-19.

“We have completed this week’s testing of all residents and we have two new positive cases of corona virus,” one of the recorded messages left on Mitchell’s phone on Oct. 17, 2020 said. The message also explained that families of infected patients were already notified. The messages reassured families that COVID-19 positive residents were then put in isolation to prevent infection.

"I was trusting those messages we were getting, that we got every week,”  Burrough said. “I trusted them whole heartedly, and I wish I hadn’t.”

In early October, their mom mentioned that her roommate started showing COVID-19 symptoms. Mitchell said she could hear her mom’s roommate coughing in the background when they spoke on the phone.

The two remained inside the same room until Burden woke up one morning to find her roommate missing. The staff provided no explanation.

On Oct. 12, Burden started falling ill herself. While Burrogh was on the phone with her mom, she could hear her struggling to breath.

Burrough then called her sister. “I said, 'I need to go to Westbury and sit in the parking lot and call 911.' I said, 'get an ambulance and get mom out there immediately,'” Burrough remembered.

A few minutes later, an ambulance and a fire chief arrived.

“So, once the fire department came - the fire chief had actually come - he went in, he came right back out and told my sister, 'I’m glad I’m getting your mom out because this place is covered in COVID,'” Burrough said.

RELATED: 'No evidence of containment' in COVID-19 resurgence in Georgia, WH report says

Mitchell said the fire chief told her a crew transported her mom’s roommate to the emergency room more than a week prior, after she tested positive for COVID-19.

“My heart sunk to my feat,” Mitchell said. Hours after arriving at Emory Hospital, their mom tested positive for COVID-19.

Ten days later, the Georgia Department of Community Health (DCH) released the results of an inspection it conducted at Westbury and identified several violations.

According to the Oct. 22 report, DCH inspectors found Westbury put residents in immediate jeopardy by keeping COVID positive and negative residents in the same units, improperly performing COVID tests, and failing to notify the Department of Health.

Before the scathing report, 11Alive's investigative team, The Reveal, uncovered how the state warned the facility at least two different times over the summer that it wasn’t doing enough to prevent infection. According to inspection records, DCH staff cited Westbury for not following infectious disease protocols in June, and then again in August.

Just over a week after Burden arrived at the hospital, she died from COVID-19. The last time she spoke to her daughters was over FaceTime.

“One of the most important things that my mom said to us is that she was thankful that we came and got her,” Burrough said.

Burden’s daughters said the nursing home administrator admitted to them the facility dropped the ball. “They said that they failed us, 'We know we failed you,'" Mitchell recalled. "That’s all they had said, is that they failed."

Since March, at least 85 of Westbury’s residents have contracted COVID-19. Twenty-two of them are dead.

Westbury declined to be interviewed, but did provide the following statement from Ron Westbury, the facility’s interim administrator:

“[We] are devastated by the impact COVID-19 has had on our center and the vulnerable individuals we serve. While we are unable to comment on specifics regarding the outbreak of the virus in our center out of respect for resident privacy and HIPPAA regulations, we believe it is important for our residents, their families, and the public to know that we have made good faith efforts to mitigate the spread of the virus based on rapidly evolving guidance and resident specific circumstances.”

Westbury later said its center submitted a correction plan to the state to address the violations cited in the October inspection.

Burden's daughters want to hold the nursing home accountable for their mom’s death, but not one attorney will take their case.

“We talked to multiple attorneys and they’ve all said the same exact thing: ‘I am sorry I cannot take your case,’” Mitchell said.

Moses Kim is one of them. The Atlanta attorney, who specializes in malpractice law, said the state has made it nearly impossible for families to file lawsuits against nursing home providers, even if there is evidence of neglect.

In April, Governor Brian Kemp signed an executive order limiting the liability of employees, staff and contractors of healthcare institutions and medical facilities during the pandemic, even if they admitted to making a mistake.

About five months later, the state legislature passed a temporary law preventing most lawsuits against healthcare facilities accused of spreading the virus, just as long as owners post signs outside facilities alerting the public they assume the risk if they enter.

“The public’s rights are being robbed,” Kim said. “And, what’s at stake is the wellbeing of our family members. When no one is kept accountable, what happens? People misbehave.”

Before the governor’s order, Moses said attorneys typically needed to only prove negligence based on reasonable care a hospital, doctor or nurse would provide. Now, attorneys must prove gross negligence, which is a much higher burden. It essentially requires identifying evidence a provider did nothing at all to care for a patient.

“This has been an over-reach, frankly, by the governor’s office, and it is completely misguided and the community’s rights are being trampled upon and robbed from them,” Moses asserted.

The governor’s office declined to comment directly about the executive order or the temporarily law.

According to the Georgia Department of Public Heath, at least 23,820 nursing home and long-term care residents in Georgia have contracted the virus since March. About 3,700 have died.

Limiting liability is happening in other states, too. According to the American Bar Association, more than 26 states have granted some degree of immunity to long-term care facilities and healthcare providers. Georgia’s temporarily law limited liability is set to expire in July.

The Burden family and many plaintiff attorneys believe Georgia nursing homes have been given more than enough time to know how to properly protect residents from COVID-19. They want the protections provided to the nursing home industry lifted.

While a lawsuit may not be possible against Westbury Nursing home, the severe DCH violations often include financial penalties. That’s little comfort to Burden’s daughters.

"There is nothing that will bring her back," Burrough said. "There is no amount of money that will make it better, but I would like for them to be held accountable."

As labs work on COVID-19 vaccine, government tries to take away right to seek damages if injured by other shots