Siblings went to bury their father and discovered another body in his grave and they're not the only ones. 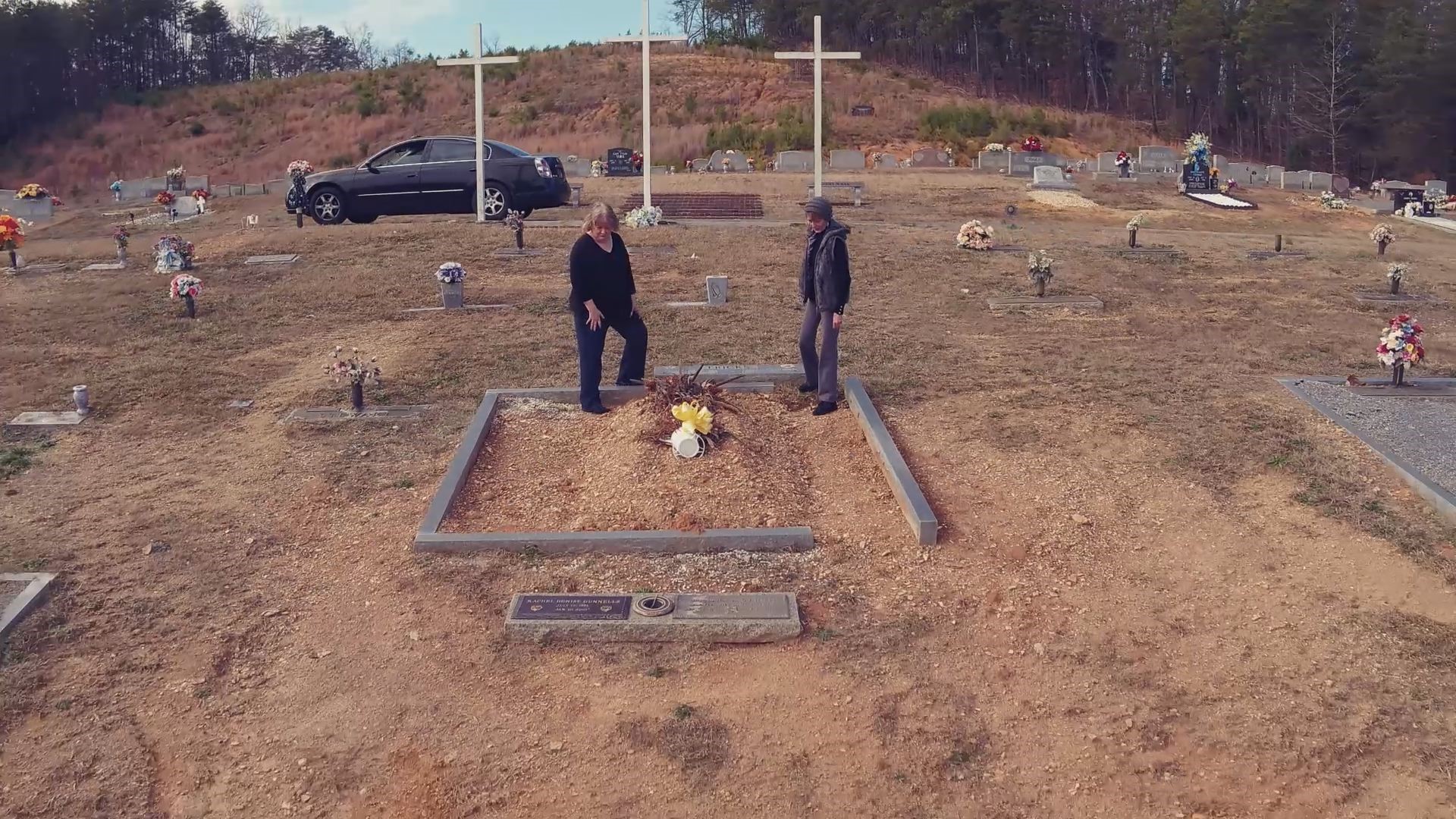 UPDATE: The day after this story was published, Georgia Secretary of State Brad Raffensperger announced he will be restructuring his department to "provide more investigative authority for and establish stronger oversight of the cemtery and preneeds industries in Georgia," the press release reads. These changes are in response to recommendations made by State Representative Rick Williams in a November hearing.

They met while working in the cotton mills in Shannon, Georgia back in the 1940's. James Fricks went on to marry Annie Beth in 1949, after serving in the U.S. Navy in World War II.

He was a pilot and his family says he loved airplanes and trains.

That's why in the late 1980s, James purchased burial plots for he and his wife at a cemetery in Rome, just feet from three large crosses on a hill overlooking train tracks. He purchased the plots from Curtis Edwards, Sr., a part owner of Morning View Cemetery at the time.

"Every time they had passed the roads here, he'd say, that's where we're gonna be buried. He wanted to see the train go by," remembers his daughter, Judy Smith.

After 64 years of marriage, Annie Beth passed away in 2012. She was buried in her plot in the North Georgia hillside, overlooking the train.

It wasn't until James died in October 2019, that their daughters, Smith and Ellen Harrison, were told their father couldn't be buried in his plot next to Annie Beth.

They were told by a cemetery worker who found someone else's coffin already in his grave.

“And I said, ‘What do you mean you’re gonna have to put my dad somewhere else? ‘Well, there is already a coffin in his plot,’ recalled Smith. “And I said we want our daddy to be where he’s supposed to be.”

At first, the cemetery owner declined to move the coffin, even after admitting he didn’t know the identity of who was in the unknown casket. The operator eventually agreed to dig up their mother, move her over, and put their father into their mother’s plot.

It wasn’t what Harrison and Smith wanted, but they relented because they did not want to delay burying their father. “First, you lose your daddy suddenly and then you find out you gotta dig your momma back up. It’s just been devastating,” said Harrison. “I felt like I was in the Twilight Zone and I couldn’t get out.”

It's still unknown who is buried there or when they were put there.

"I would like for them to find out who this poor soul is. I mean he had to have somebody who loved him or her," said Harrison.

► WATCH | More of this emotional interview with the siblings

A Reveal investigation found they’re not the only family who went through this nightmare. It happened to Thomas Keeney’s grandparents, too. When his grandmother, Cora Lee, died in 2007, he says a Morning View grave digger also discovered an unknown casket buried in her plot next to her husband.

Keeney believes the former owner is to blame. “Is anyone here where they are supposed to be, marked who they say they are?” questioned Keeney.

RELATED: Georgia grandmother goes missing from her grave; her family is furious

The Morning View Cemetery is currently owned by a company recently dissolved by the state called MVC Rome, Inc. The company's CEO is Tyler Brown.

While Brown declined to do an interview, an employee for the company submitted a response by email.

“Unfortunately, there have been some issues that have been brought to my attention that have taken place from previous owners. We inherited those problems when purchasing the cemetery/property and we’re doing what we can to work with the family’s that are involved. We can’t make everyone happy but we’re willing within reason to resolve issues,” the MVC Rome statement read.

While traumatic when it happens, the cemetery industry says the problem is rare. Barry Henderson owns Henderson & Sons Funeral Home and a cemetery in Rome. He says issues typically arises in older cemeteries.

“I would say it doesn’t happen frequently, but it does happen," said Henderson.

In most cases, cemeteries say it’s an honest mistake and they do their best to make it right. Morning View’s current owner echoes the same sentiment, but we’ve discovered one of its first operators was not always so innocent.

In 1991, Edwards pled guilty to two counts of violating the Georgia Cemetery Act. Essentially, he admitted to taking money from dozens of burial plots he sold that was supposed to go into a perpetual care fund to maintain Morning View and other cemeteries.

At the time, 11Alive interviewed Thelma Welch, one of his victims, after a grand jury indicted Edwards. She paid Edwards for a grave marker and a vault in 1986.

“I paid him $25 a month from my social security disability check and I wanted it fixed so I wouldn’t leave my children in debt when they bury me,” said Welch.

Edwards is now dead, but some believe the impact of his crime is just now starting to surface as those he sold burial plots to pass away. Henderson says there’s little families can do but wait and hope the cemetery is responsive to the family’s concerns.

“I don’t know if the state can do anything. I think it would all go back to the contract that the family entered in with the cemetery,” said Henderson.

According to Floyd County and Georgia Secretary of State records, Morning View’s ownership has changed hands multiple times since 1991. It includes Justin and Larry Hight and John Niedrach, a Floyd County Superior Judge. Its current owners include Tyler and Bernard Brown.

Bernard Brown has a long history of drug and weapons-related criminal convictions. Rome Police recently arrested him in January for a probation violation. Below are some of the other crimes he has been charged with since 2005.

How to Prevent this from happening to you: