11Alive's The Reveal uncovered how Kevil Wingo died in custody after hours of begging for help. 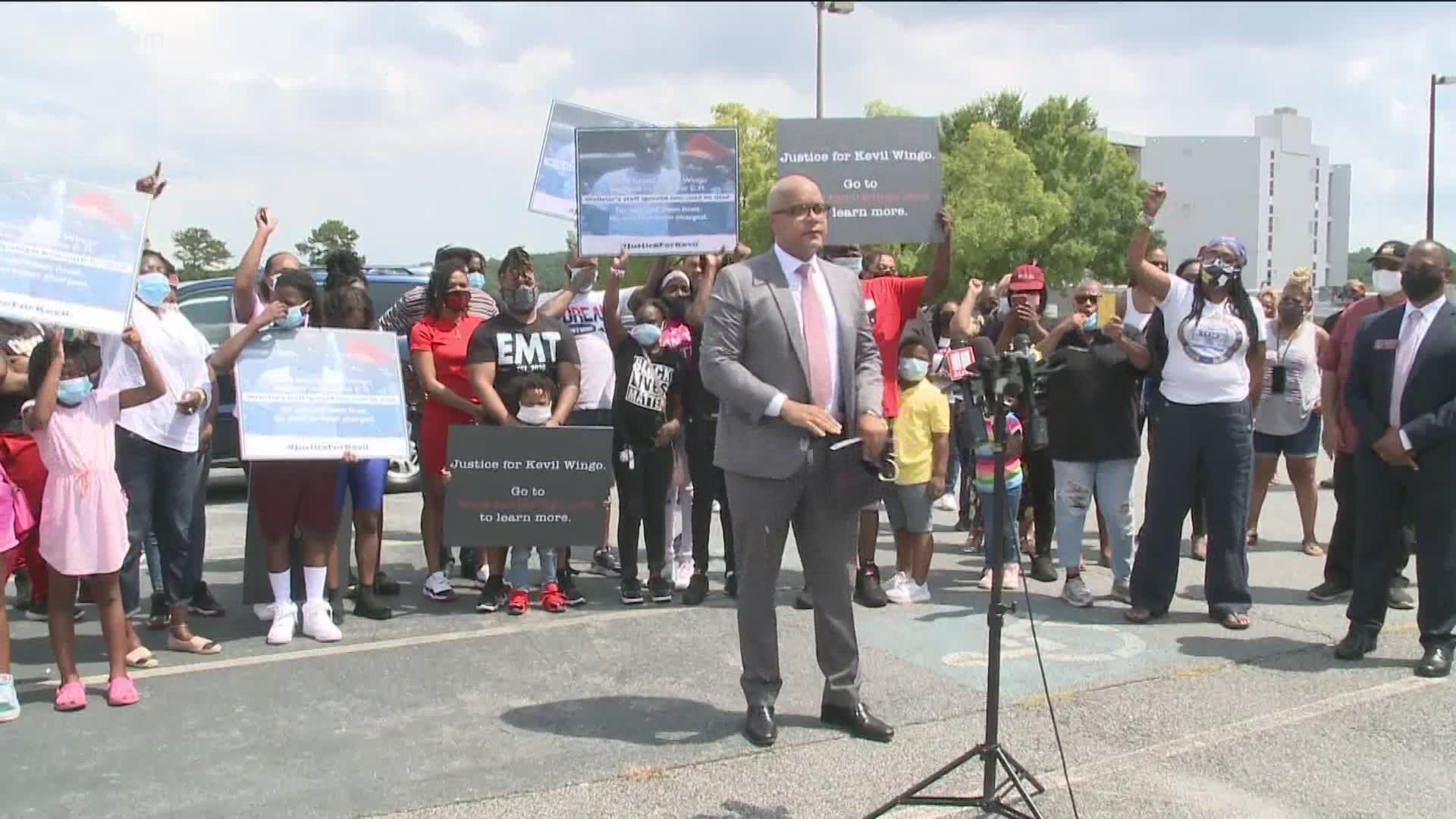 COBB COUNTY, Ga. — Calls for the Cobb County District Attorney to investigate the death of a former inmate continue to grow, following a Reveal investigation that exposed jail video of the man pleading for medical help hours before he died.

Thursday afternoon, Kevil Wingo’s son held a picture of his late father outside the Cobb County Detention Center, where he died begging for help in September 2019. He was joined by about two dozen members of the Cobb County NAACP, the ACLU, a state representative and his family.

“All I want is justice for my brother,” said Kevil Wingo’s sister, Tiffany. “He didn’t have to die like that.”

11ALIVE REVEAL INVESTIGATION: 'I can't breathe': Man dies in custody after hours of begging for help

According to an internal affairs investigation, deputies and medical personnel heard the 36-year-old Atlanta man complain of an ulcer and repeatedly scream that he could not breathe. Wingo was in custody for drug possession.

Instead of bringing him to the hospital, jail staff put him in padded isolation room where he died an hour later. The medical examiner ruled his death natural, caused by a torn ulcer.

“Everyone ignored his cries for pain. That has stop. It is time for this Cobb County DA to take our pleas seriously and to listen to Kevil Wingo for the first time,” said Timothy Gardner, Wingo’s family attorney.

“We all saw the video. I don’t think anybody thinks that video is acceptable,” added state Representative David Wilkerson, who represents parts of Cobb County.

According to the video, Wingo’s condition appeared so poor to some medical staff, they asked if they could help him. The nurse in charge at the time, Annaleen Visser, said no.

“He actually fell backwards onto the floor and crawled to the window and was asking again, begging for help, saying ‘he could not breathe,’“ said Tiffany Womack, a lab technician who worked in the infirmary at the time, during an interview with sheriff investigators last year.

At the time, WellStar Health System managed the jail’s medical infirmary. In a statement to 11Alive, the company said its staff failed Wingo.

"While there is more to do and we continue to review the facts and circumstances surrounding Mr. Wingo’s death, it is clear to us now that more should have been done to assist Mr. Wingo at the detention center, including from members of the WellStar’s Detention Center team directly in charge of his medical care,” said a WellStar company spokesperson in an email on Aug. 15. “What we have seen and learned of Mr. Wingo’s experience at the Detention Center is heartbreaking and unacceptable.”

Visser, and other infirmary staff who cared for Wingo, still work at the detention center.

“You have to go! You have to go!” said Jeriene Grimes, president of the Cobb County NAACP, in response to learning the nurses still work at the jail.

This past May, WellStar stopped providing medical staffing for the detention center after more than 20 years. Wellpath, LLC took over the jail’s infirmary shortly after.

“A pillar of Wellpath’s mission is to provide quality care to every patient with compassion, and we maintain a culture to always doing the right thing for our partners, employees, and our patients. Even though Mr. Wingo’s death occurred prior to Wellpath’s operations at Cobb County Detention Center, it is necessary to review the facts surrounding this event that have been made available to us in accordance with Wellpath’s standards. The involved parties have been placed on leave pending this review. Most importantly, however, we extend our deepest condolences to the loved ones of Mr. Wingo during this difficult time.”

“It is absolutely unfathomable that these individuals have not been charged with crimes,” Gardner said.

In a statement released by Holmes before the group’s press conference, she said her office has received records related to Wingo’s death from Gardner.

“As I have indicated to him, those files will be reviewed by my office. To date, we have not received any other files from any other agency,” Holmes said.

Holmes said her office cannot convene a special grand jury to investigate the detention center due to an judicial emergency order from the Georgia Supreme Court, due to the pandemic.

“As your District Attorney, my office will do the right thing, by basing our decisions on thorough agency inspections and appropriate case investigations, when the Georgia Supreme Court provides us with the opportunity to address such matters,” Holmes said.

Gardner said their request isn’t to investigate the entire jail, but solely Wingo’s death. He also said if the Holmes won’t investigate, she should ask the Georgia Bureau of Investigation to do it for her.

Some grand juries have convened during the pandemic under special circumstances. In June, a grand jury indicted three men now charged with killing Ahmaud Arbery in Brunswick. The unarmed Black man was shot and killed while on a jog in February.

Months after his death, a south Georgia district attorney requested the GBI to investigate his death after cell phone video surfaced showing Arbery shot multiple times. A few days later, the agency filed charges against two of the three men. Holmes is now leading the prosecution for the Arbery case.

Gardner wants the district attorney to treat Wingo’s case with the same urgency.