Courts have repeatedly ruled that police officers who shoot someone have no responsibility to provide any kind of medical aid, other than calling for an ambulance. 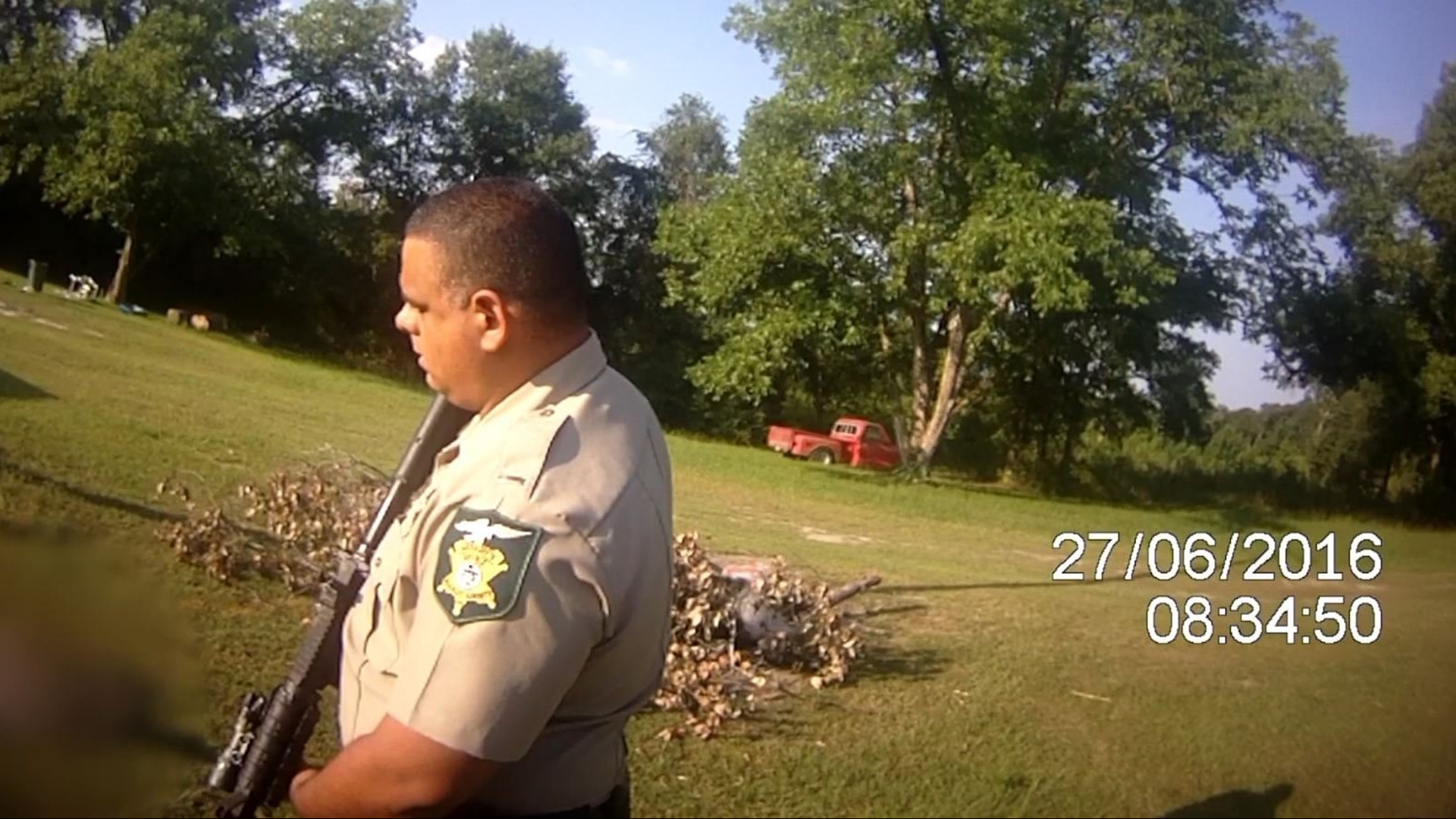 “You don’t belong here,” he said to the photo on his son’s tombstone.

32-year-old Blake Peacock was shot in the chest with a single round from a deputy’s AR-15. He fell face-down in the grass outside his mother’s rural home. He was still breathing for several minutes.

Police body camera video shows the deputy just standing over Blake as he struggled to breathe.

“They didn’t render any aid, whatsoever, after they shot him,” Peacock said of the deputies.

Bleckley County deputies were cleared in the 2016 shooting. His parents sued the deputies in federal court, not for wrongful death, but for deliberate indifference.

“They don’t even turn him over. He fell on his face. They didn’t care at that point,” Peacock said.

One of the deputies rushed to his cruiser, not to get a trauma kit, but to get yellow police tape. As the ambulance arrived, more than eight minutes after the shooting, the deputies and city officers were cordoning off the crime scene. Blake still had a faint pulse, but medics were not able to save his life.

One of the deputies on the scene called for an ambulance within eight seconds, and repeatedly called dispatchers to get medics to the scene quicker. That was all they were required to do, according to the federal judge.

The court dismissed the Peacocks’ lawsuit for deliberate indifference, citing established precedent that police officers are not required to provide first aid to someone they have just shot.

The U.S. Supreme Court affirmed in 2019 that police officers meet all legal requirements to preserve life once they call for an ambulance. Justices ruled that officers do not have to provide any first aid to a wounded suspect.

“They can just stand over and watch somebody die,” Peacock said. “That should not be.”

Above and beyond the call of duty

Many police officers do heroically save suspects they’ve shot even though they are not required to by federal law.

Body camera video from across the nation shows officers saving lives, even those of suspects who seconds earlier tried to kill them.

The standard operating procedure (SOP) manual for Atlanta Police requires officers to, “make appropriate medical aid and/or assistance available to all persons who have a physical injury or when injury is likely to have occurred due to an employee’s use of force.”

It’s not clear if Atlanta’s SOP requires officers to directly provide first aid, or if they can meet that requirement simply by calling for an ambulance. The "Medical Attention Required" section of the manual goes on to say, “medical aid and/or assistance will be provided in a timely manner or as soon as practical without further endangering the employee or others.”

In practice, Atlanta Police officers routinely switch from enforcer to rescuer after the immediate threat from a suspect has passed.

In September 2017, Officer Mason Mercure was on the scene when another officer shot a carjacking suspect. Officer Mercure immediately pulled out a tourniquet from his duty belt and tightened it around the suspect’s wounded leg, saving his life.

Officer Mercure had also been on another shooting scene a year earlier, when Officer Larry LoBianco had fashioned a makeshift tourniquet from his radio’s shoulder microphone, saving the life of a kidnapper.

Atlanta Police now issue tourniquets to officers so they can save the lives of mass-casualty victims, wounded officers, and even suspects who get shot in officer-involved shootings.

But responses vary officer to officer and department to department.

Ed Peacock is now fighting to change first aid policies at police departments. His mind is always on the day two deputies watched his son take his last breaths.

“There were two deputies there. I feel if one of them were shot, I think the other would have rendered some kind of human aid to the other officer, ” Peacock said.

The father believes a wounded suspect should be treated like any other human being, so officers should do everything they can to save them.

Peacock started his mission to change the rules with the city council in his hometown of Cochran, Georgia. In a speech over the summer, he told council members, “there’s currently no federal law or peace officer policy that requires any U.S. lawman to render any physical lifesaving aid to an American citizen they shoot using deadly force.”

The state of Washington now requires all of its police officers to provide first aid after a shooting. The new law was enacted after voters approved a sweeping referendum to change the way police shootings are investigated and prosecuted.

“It’s the good people behind the badges that are trying to give aid when they can,” said Lance LoRusso, an attorney who represents police officers, often after shootings. “But, if you make that a law that they’re required to, then we’re going to get into these second-guessing situations where the officer wasn’t tactically able to and they could be facing criminal liability. That’s not appropriate.”

It reads, in part, “if officers determine the conditions and environment in the vicinity of the incident are safe and under control, officers should immediately provide any necessary medical assistance to the subject to the degree of which they are trained and provide for emergency medical response where needed.”

“This has given us hope,” Peacock said. “I’m hoping that’ll be the ripple in the pond. That’ll go across the whole country.”

'The Officer's Wife': What happened behind the closet door?