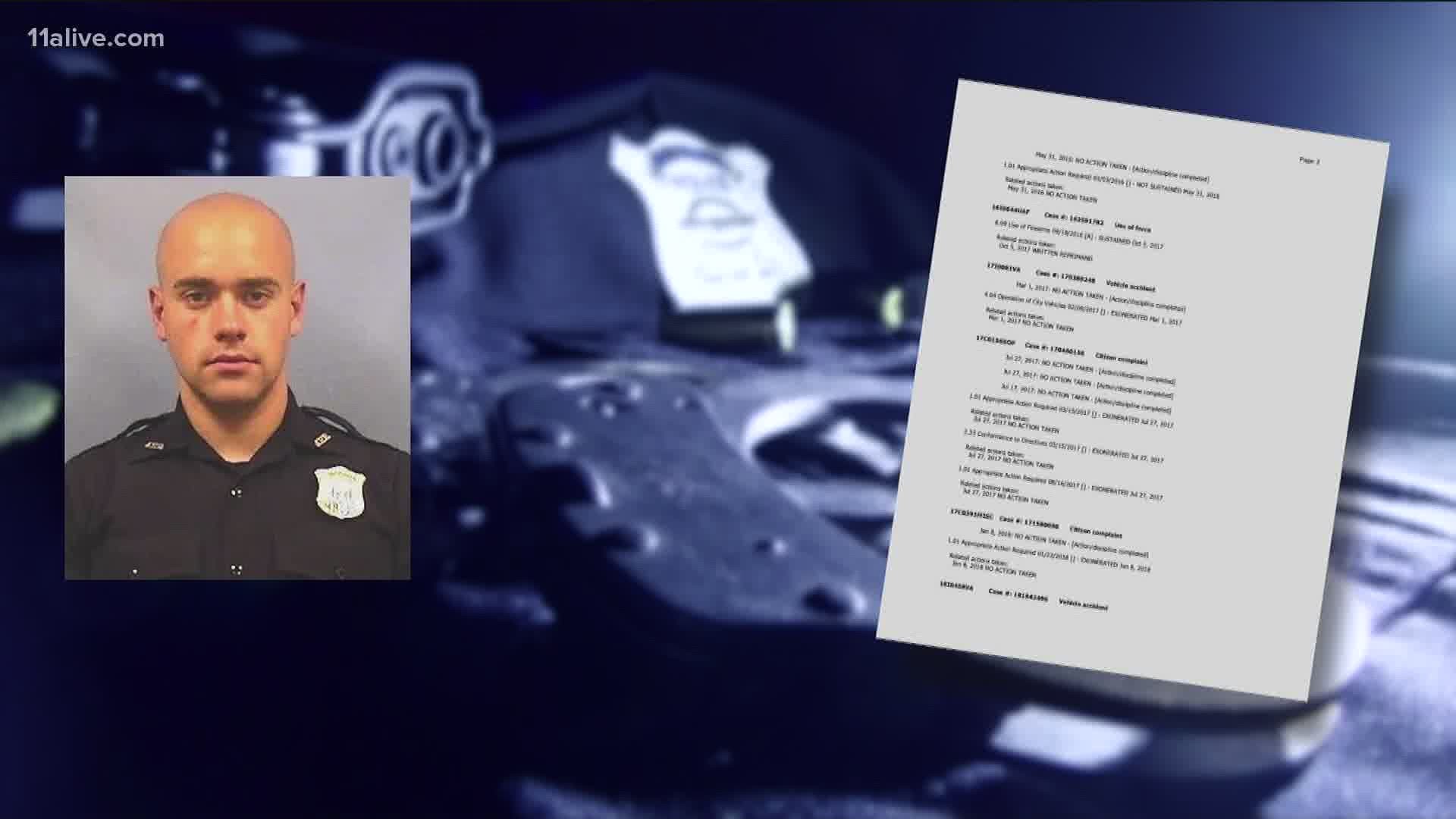 ATLANTA — A week after the shooting of Rayshard Brooks, records released to 11Alive detail previous investigations into the conduct of the Atlanta Police officer who shot him.

Garrett Rolfe is now being charged with 11 different counts, including felony murder, according to District Attorney Paul Howard. Devin Brosnan, the other officer involved is facing four charges.

11Alive's investigative team, the Reveal, found an accusation of a cover up from 2015, involving Rolfe and other Atlanta Police officers.

Records from Fulton County court show officers failed to mention they fired multiple shots into a stolen truck, hitting the driver, in the incident report.

Jackie Harris was shot in the center of his back.

The police incident report said only that "Mr. Harris was transported to Grady [hospital] due to injuries during the incident."

In the seemingly detailed report, officers described the equipment that identified the truck as stolen, the specifics on the chase, officers on scene, a failed attempt to break the truck's window, the equipment used after to break it, Harris moving to the passenger side of the truck to "avoid detainment", and more. The report even ended with a sentence about how one of the officers sustained a finger injury from striking the truck window.

But missing information was what the court was troubled by.

Judge Doris Downs said from the bench, "None of the police put in the report that they shot the man - none of them - and they sent him to Grady with collapsed lungs and everything, and the report doesn't mention it. I am ethically going to be required to turn all of them in."

This incident showed up on Rolfe's disciplinary record as being investigated for a firearm discharge in 2015. According to court records, Rolfe fired three of the five shots into the truck. The final disposition for that internal investigation however, is blank on the report that Atlanta Police provided.

In a letter to the court, Harris explained his side of what happened, saying he did not have a weapon and believes the officers used "unjustifiable lethal force."

"Not only have I been wronged and unjustly caused bodily harm by a 'peace officer', but the lack of documentation by the Atlanta Police Department can only be conceived as a 'cover up,'" Harris wrote.

Atlanta Police supervisors did tell 11Alive on the scene that night, that officers did fire into the truck.

However, 11Alive later learned that the DA cleared Rolfe and the other Atlanta officers involved in the shooting this past February, four-and-a-half years later, determining that there was "no criminal conduct related to the actions" of the officers. No charges were brought against the officers.

Because the prosecutor admitted there were concerns over the officers' credibility in the case, Harris was given two years probation in a 2016 plea deal, even though the defendant was charged with multiple felonies.

Editor's note: This story has been updated to reflect new information uncovered by 11Alive Investigator Brendan Keefe that the district attorney cleared Rolfe and the officers involved in the incident.

All Atlanta police officers will get $500 bonus today