After 1300 dogs were rescued from Ga. licensed breeders, The Reveal wanted solutions. Our investigation took us to the puppy mill capital of the country. 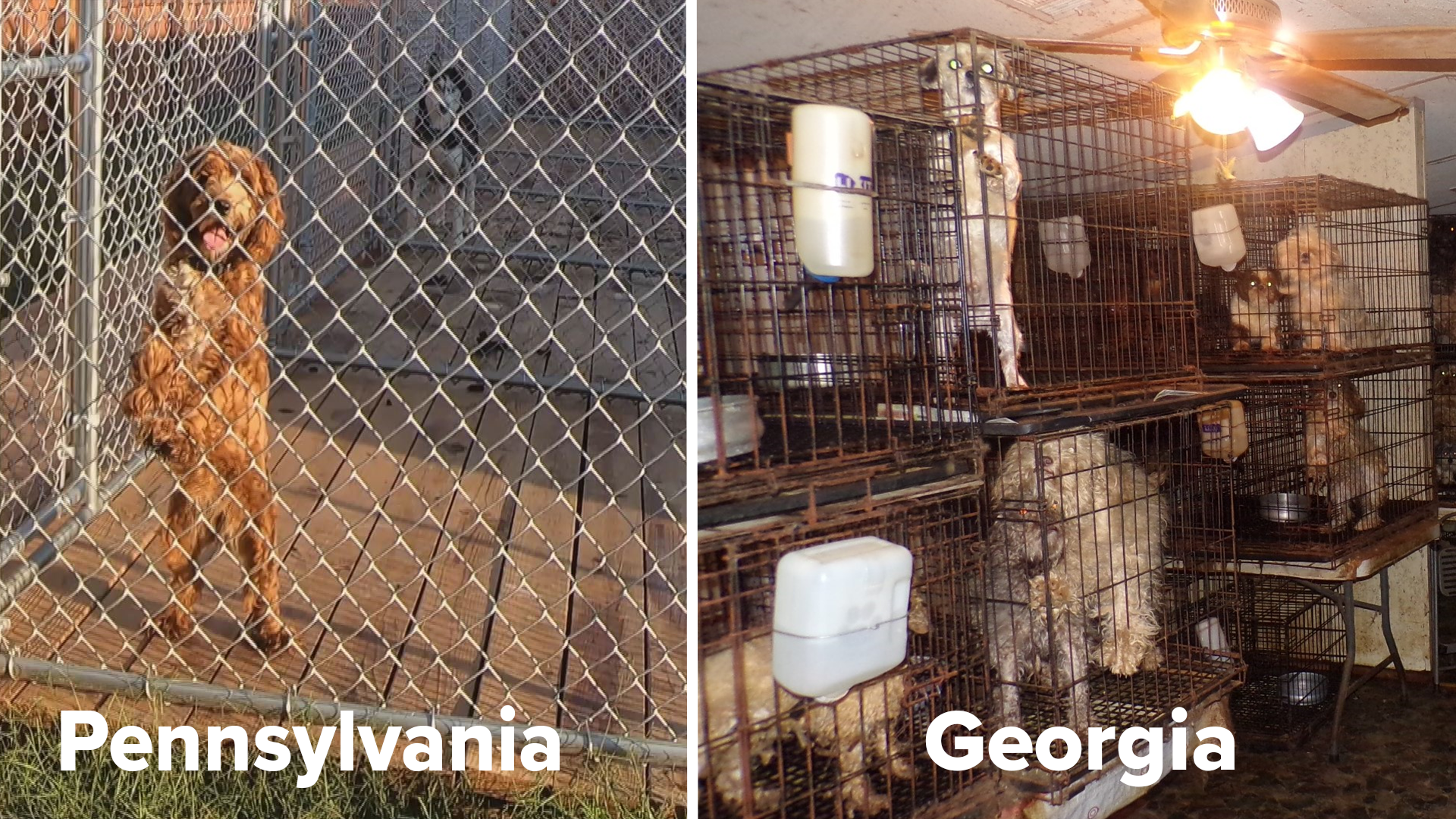 Very few dogs get to meet the Governor. They don’t get to be DJ for a day or have a parade in their honor.

“It was one of the most beautiful [things] to see this dog that had nothing and had been so unloved for her whole life, to be embraced by a community,” Grace Herbert said, fighting back tears.

Herbert, who runs Finding Shelter Animal Rescue, said she had the honor of caring for Victoria in the last year of her life.

The German Shepherd spent the first 10 years producing puppies for a dog breeder in Pennsylvania. It’s estimated she gave birth to 150 puppies in that time but was discarded when she started to show signs of a terminal illness, degenerative myelopathy, essentially the dog form of ALS – Lou Gherig’s disease.

The face of 'Victoria's Law'

“I had just never seen a dog who was that shut down and shy, and scared and growling. And she was 91 pounds in a crate that was suitable for a twenty five pound dog,” said Herbert on the day she went to pick up the dog.

Among the team that helped assess and treat Victoria was Atlanta resident and renowned dog trainer Victoria Stilwell. It was after her, the dog was named.

Victoria quickly found a new home in the hearts and halls of Pennsylvania’s state capitol, fighting to ban dog sales at pet stores.

Victoria's Law, as the bill is being called, would not only limit where dog breeders could sell their puppies, but would also require breeders to post their license number on all advertisements. The bill currently remains stalled in the Senate Judicial committee.

“One time, our state was ranked 36th in our cruelty laws and I’m so proud to say … we are now in the reach of the top ten states,” said Pennsylvania Humane Society Director Kristen Tullo, sitting in the hall of the capitol.

“We will do the work it takes to get to number one and that is what inspires me and the hopefulness that Pennsylvania has made. It’s not even a step, it’s a legislative leap,” explained Tullo.

It is for that reason that The Reveal Investigator Rebecca Lindstrom, in partnership with Solutions Journalism Network, flew to Pennsylvania to meet with lawmakers, lobbyists, law enforcement, rescue groups, and dog breeders.

Opening the Door to Reform

While standards for puppy mills did improve some in Georgia in 2019, the state’s Agriculture Commissioner Gary Black has said he’s committed to doing more.

Kristen Donmoyer is the director for the Bureau of Dog Law Enforcement in Pennsylvania, the state agency that oversees kennel licenses.

In 2008, the state overhauled its regulations for kennels that sell 60 dogs or more to pet stores and dealers. At the time, Donmyoyer was an inspector - or dog law warden - as they’re called in Pennsylvania. She said there are stark differences between compliant licensed commercial breeders then and now.

“It’s bright, it’s light. The dogs come running up to you. Before you would see dogs cowering in the back. They didn’t want any human interaction.”

Lindstrom tried to visit several commercial breeders during her visit, but most would not let her inside even without a camera. The one commercial breeder that did briefly show her the facility said even when buyers come, he brings the dogs to a showroom. They don’t get to go back to the living pens.

On the property in Lancaster County, Lindstrom saw a long warehouse-like building with walls every five feet or so to create runs for the dogs. In Pennsylvania, commercial breeders are required to have unfettered access to an outdoor exercise area. All breeders must have a vet-approved exercise plan for each dog.

At this location, the breeds were small and lived in groups. Inside the building it was climate controlled. In the winter, the floor was heated. In the summer, the air conditioning was set to keep the temperature below 85 degrees. The dogs had to be seen by a vet twice a year.

Pennsylvania also bars anyone convicted of animal cruelty from holding a kennel license for 10 years. No such barrier in Georgia exists. To be sure applicants are in compliance, Pennsylvania conducts a background check on each one as well as their managerial staff.

The owner, who asked not to be identified, said at the time the reforms were introduced he was against them. But now, he believes they make sense. The dogs are happier and, for him, that means they produce more puppies.

A mini rottweiler breeder that did welcome our cameras also praised the regulatory changes. Vintage Mini Rotts is considered a non-commercial kennel, meaning it sells directly to customers.

In Pennsylvania, that type of breeder is not held to the higher standards even though it’s licensed to sell and own up to one hundred dogs each year. The owner says he tries to maintain commercial standards anyway, believing it is the right thing to do.

Animal welfare advocates would like to see the state hold every licensed kennel to the same higher standard.

The floor of the kennels at Vintage Mini Rotts have a solid surface, something that wasn’t required in Georgia until earlier in 2019. Before, dogs could live their entire lives in wire hutch cages, injuring their hips and paws.

RELATED: Hidden in plain sight: Sick animals, a jawless dog and a system that missed them

The owner of Vintage also said he uses an invisible fence to give his adult dogs a chance to roam. We found two dogs, JP and Willow, dashing about the property during our visit. Their coats were groomed, nails trimmed and teeth in good condition.

“For us, condition of dog is a regulation. We’re looking to make sure that dog is well groomed, there’s no glaring physical problems. If you see a droopy mouth, that could be a sign of a dental problem,” like rotting teeth or other dental disease said Donmoyer.

Wardens, who inspect each kennel twice a year, can order a 72-hour vet check if something doesn’t seem right or make a referral to law enforcement if conditions are so bad that there might be a case for cruelty.

“We put on our reports that we made a cruelty referral. We want that out there. Even if it doesn’t result in anything, we want the public to know we did that," said Donmoyer.

According to the Bureau, referrals to law enforcement led five breeders to face charges for animal cruelty in 2018, ten more so far this year. The Bureau also filed misdemeanor charges against 22 kennels in 2018, issued nearly 300 citations for regulatory violations and collected $14,750 in civil penalties.

In comparison, Georgia doesn’t track animal cruelty referrals, does not have the authority to file criminal charges, and collected nothing in civil penalties. And in Georgia, to find that out you have to file an open records request.

In Pennsylvania it’s all posted online along with every inspection report at every kennel.

“It’s the public’s right to know,” Tullo said. “We deserve to know what kennels have had violations so, as a consumer, we’re protected from not being duped into purchasing from puppy mills.”

Every year, the Humane Society reviews the inspection reports it can access to compile a list of the nation’s Horrible Hundred Dog Breeders. There were 12 from Pennsylvania in 2018.

While some see that as a sign of the problem, Donmoyer believes its proof her wardens are trying to do their job by not only catching the violations but putting them in writing and posting them for potential buyers to see.

Since the 2018 list came out, three Pa. kennels have been shut down. Efforts to close a fourth kennel are tied up in court.

Donmoyer said that when the changes went in place in 2008, the number of large commercial kennels in the state dropped from 350 to 16. The number in the past decade has since climbed to 86, but Donmoyer stressed that those new kennels are having to follow the new rules.

“It’s expensive. There is a cost associated with coming into compliance," Donmoyer said.

Senator Killion said in 2008 that when they debated the new regulations, dogs and corn were both just a commodity - a product grown in a largely agriculture-based state. But he refutes any criticism the reforms were anti-business.

Killion said even with the changes, most dogs still don’t get toys to play with or a soft place to sleep. Females still spend their entire lives behind the bars of a cage. That’s why he’s pushing for Victoria’s Law.

“Bottom line, make sure they have no place to sell their puppies on the internet and at retail pet shops," Killion said.

“Pet stores were created to not have to show you that side of the operation at the facility because nobody wants to see that," Tullo said. "So, at the pet store, these dogs look healthy and happy, but they’ve lived a life of suffering.”

Victoria’s Law would also require all breeders to post their license number on every advertisement, helping customers better understand where their puppy comes from.

We shared our findings with the Georgia Department of Agriculture, which responded in a written statement saying:

"The Commissioner and the companion animal team appreciate your research and ideas regarding the program and potential ways to improve. The department has had discussions with Senator Kirkpatrick regarding possible changes in the law to strengthen the program, but of course those actions are ultimately in the hands of the legislative body and we will implement rules and regulations accordingly based on the law.

We are in the midst of working on new rules focused on reporting and better access to inspection reports and hope to have those posted soon so they can be implemented in the next quarter.

Thank you again for your interest in the companion animal program and we hope to continue our efforts to improve."

**This story has been supported by the Solutions Journalism Network, a nonprofit organization dedicated to reporting about responses to social problems.