We spot-checked coronavirus safety protocols at seven stores over two weeks. Stores were not enforcing mask rules even after requiring their workers to wear them. 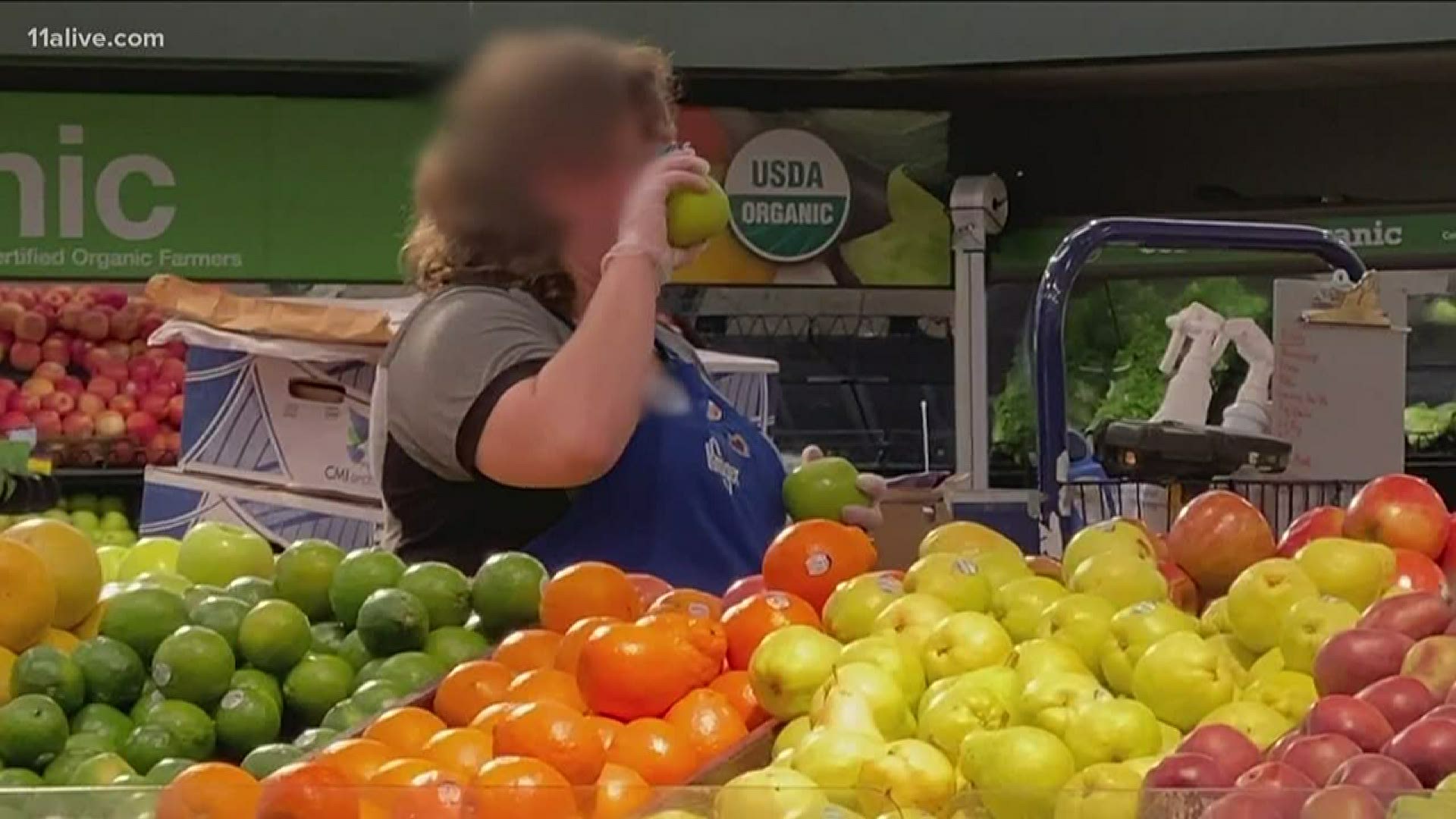 ATLANTA — Weeks after the CDC recommended face coverings in public, grocery stores were still leaving the decision to wear a mask up to each employee.

The Reveal, 11Alive's investigative team, spot-checked seven Atlanta-area grocery stores among five different chains while shopping for necessities over a two week period, both before and after Walmart, Kroger, and Publix required their workers to wear masks on April 20.

Target still does not require masks, and we found most employees during a recent visit to be mask free. Target wouldn’t tell us if the company is considering a mask requirement. You can read Target’s full statement below as well as what we found at other grocery chains.

The Kroger at 3651 Peachtree Parkway in Suwanee/Johns Creek had nobody sanitizing the carts when we visited on April 13, April 17, and April 20. Towels were not available for self-sanitizing on April 13, though there was a spray bottle of disinfectant.

We observed a produce stock clerk touching her head to adjust her glasses while holding an apple, seconds before putting that same apple out for sale. She and one of the deli food-prep workers were not wearing face coverings at the time, but that was a week before Kroger started requiring masks in its Atlanta Division stores.

A cashier wearing a mask on April 13 was also wearing gloves, but those gloves were visibly torn as he handled each item in a customer’s order.

On April 20, the first day Kroger started requiring masks for its employees, we saw another deli worker at the Peachtree Parkway location with the mask under her chin while in the food-prep area. She then walked through the store with her mask still under her chin, talking with another employee who had no mask at all.

Workers with masks sometimes had their noses protruding from the top, uncovered.

The worker collecting carts had no mask on the first day Kroger required them. The next day, the cart collector had a mask but was touching his head before pushing the carts through the parking lot with the same hand.

On April 17, at the Kroger at 11877 Douglas Road in Alpharetta, no one was sanitizing the carts when we arrived. There was a spray bottle available, but no paper towels to wipe the carts ourselves. Employees were observed congregating close to each other while talking, even though the store had stickers on the floor advising customers to stay six feet apart.

Kroger responded that it has distributed over 350,000 masks and gloves. The company added, “Thank you for bringing these matters to our attention. We are working with store managers and associates to address the issues you identified – and we encourage customers with concerns to reach out to us.”

You can read Kroger’s full statement at the bottom of this story.

We visited the Walmart at 2395 Peachtree Parkway in the Suwanee/Cumming area on multiple dates.

Walmart and the Target store nearby both had employees dedicated to sanitizing the carts.

On April 20, also the first day Walmart required all employees to wear masks, we spotted several workers with their masks under their chins, including someone who appeared to be a manager or a supervisor.

Three employees were socializing within a couple of feet of each other with two of their masks pulled down in the cookie aisle.

One worker had her mask down on her chin while handling grocery items for online pick-up orders.

This Walmart location had seven checkout lanes with four of them open. Rather than staggering the lanes, the store had those four lanes open in a row, right next to each other.

All stores we checked except Dollar General had plexiglass partitions between the cashiers and the customers, but at the Walmart of Peachtree Parkway, the cashier in the adjacent lane was standing right next to the customer with no partition between them because all the open lanes were together.

Walmart responded, “thanks for bringing this to our attention. We began requiring masks for all associates Monday and supplying the masks to associates earlier this month. We are taking steps to ensure area stores and our associates are clear on the changes so this does not happen again.”

You can read Walmart’s full statement at the bottom of this story.

The Publix at 1250 West Paces Ferry Road in Buckhead also had two lanes open right next to each other, putting customers and associates in adjacent lanes well within six feet of each other, though the company insists this is a rare occurrence.

The Buckhead Publix is smaller than suburban stores so it has fewer lanes.

Publix told us, “our guidance is to open every other register and then fill in as needed in an effort to serve customers as efficiently as possible.”

Indeed, when we visited the Publix at 5180 McGinnis Ferry Road in Forsyth County, we noticed open registers had a closed lane in between them. Workers had even moved the candy shelves to block closed lanes, keeping shoppers from inadvertently walking too close to cashiers and baggers who are otherwise protected by those plexiglass shields.

We saw near-universal mask use at the Publix locations, and there were dedicated staff sanitizing all carts. Publix is also the only chain where we observed one-way aisles.

You can read the full Publix statement at the bottom of this story.

There are signs and banners in communities all over the Atlanta area thanking grocery store workers for risking their lives to keep the supply chains moving.

Meanwhile, some customers who are considerate enough to wear disposable gloves are throwing those gloves in the parking lots outside grocery stores. We photographed discarded gloves on the pavement outside every store we visited. Workers will eventually be forced to pick up those used gloves.

Grocery store chains are giving workers hazard pay that amounts to around two dollars per hour, with bonuses varying from company to company.

We talked with some grocery store workers online. They universally told us they do not feel like heroes.

“We’re out there working for poverty-level wages every day because we are forced to,” said one college student who works part-time at a major Atlanta-area grocery store.

“The reason I’m doing this isn’t because I want to be a hero. It’s because I am trapped here,” she added.

Laid off and fired workers are eligible for state unemployment benefits plus a $600 a week premium the federal government added as part of the CARES Act, but grocery store workers say they won’t get fired, and if they quit, they won’t qualify for unemployment.

“Now, as an employed person, I’m making less than an unemployed person,” one worker told us. She added, “in this essential worker position that we’re in, we’re not going to get fired. And if you quit, you can’t get that unemployment bonus. So we’re trapped, essentially.”

READ | The full statements from Kroger, Walmart, Publix, and Target

Do you have 'quarantine fatigue?'