'What does that mean moving forward for any type of immunity?': Testing for COVID-19 antibodies

Two 11Alive journalists were tested for COVID-19 antibodies months after recovery. But experts say antibodies are just a topic in the immunity discussion. 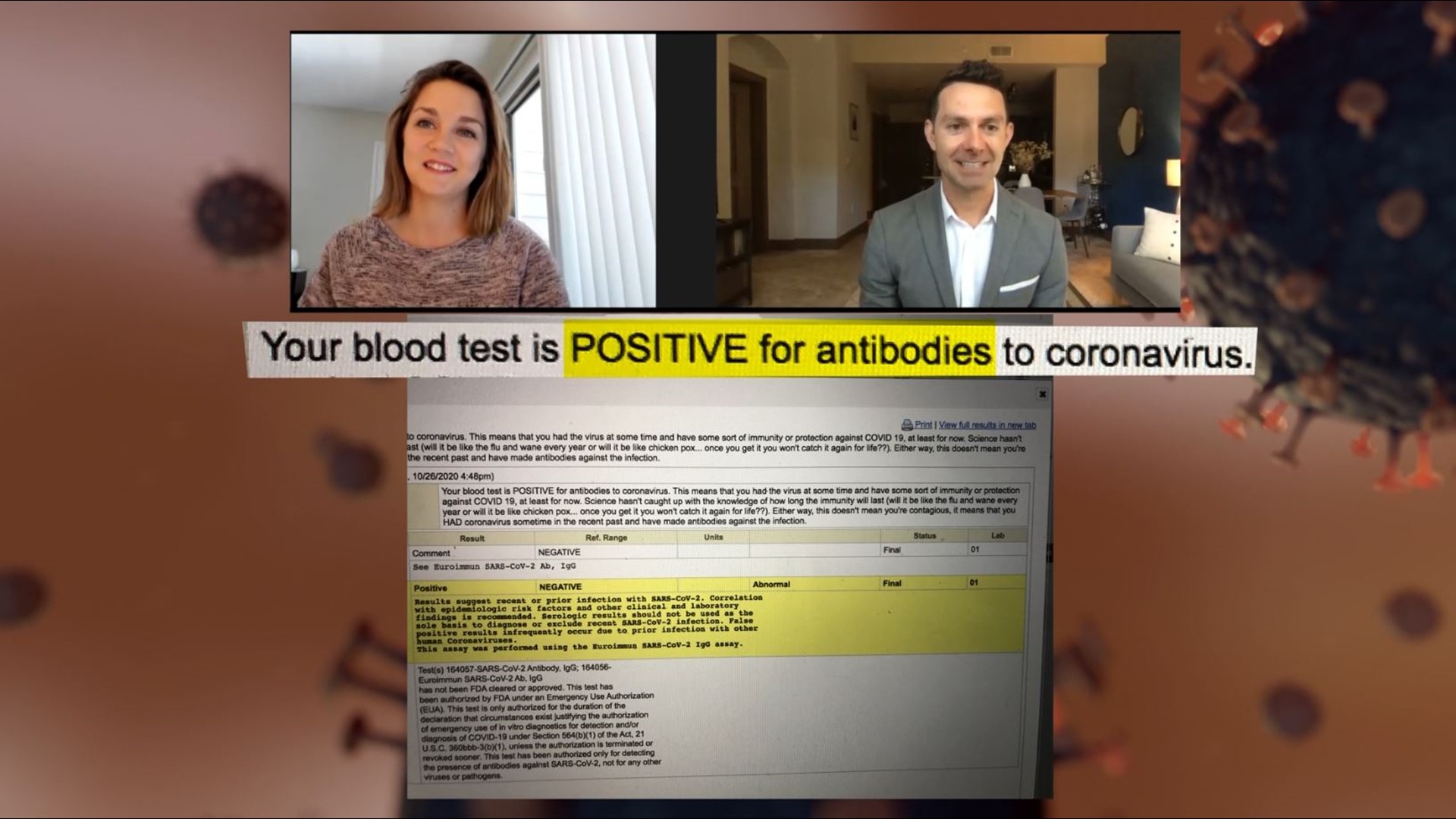 ATLANTA — Since March, at least 11 million Americans have contracted COVID-19. The vast majority of them recovered thanks to antibodies their body created to fight off the virus.

But, how long do those antibodies last and what does that mean for possible future contraction of the virus? 11Alive's investigative team, The Reveal, recently tested two recovered patients for antibodies.

Pierrotti recovered from coronavirus this past March. Wiley contracted the virus in July and wants to know whether she still has the antibodies that helped her recover.

“It’s a really big question right now, and I’m also curious about what that means. What does that mean moving forward for any type of immunity,” Wiley asked.

Both of the tests were conducted at an Atlanta Urgent Care. A nursing assistant took two samples of their blood, for a test that cost $175 each.

Wiley’s symptoms lasted nearly a week. “I definitely ran a fever. I was very tired. I slept for about five days,” she recalled.

Three days later the results were in. Wiley’s tests results showed no sign of COVID-19 antibodies. Even though she recovered just three months before. That’s about as long as researchers predict antibodies are most effective before levels diminish.

The results surprised her. “Yea, it does. I thought for sure it would be positive,” Wiley admitted.

Test results for Pierrotti showed he still had the antibodies eight months after his recovery.

So, does that mean Pierrotti has immunity and Wiley doesn’t? The answer is complicated.

Pierrotti’s results came with a disclaimer, saying “[You] have some sort of immunity or protection against COVID-19, at least for now. Science hasn’t caught up with the knowledge of how long the immunity will last.”

Dr. Anthony Fauci, the director for the National Institute of Allergy and Infectious Diseases, echoed a similar sentiment last month.

“There are some people with high levels of antibody, but they are not really neutralizing antibodies that might actually not protect you,” Fauci said in an interview.

Most experts say a drop in antibody levels after recovering is expected and not altogether concerning.

Plus, antibodies are not the body’s only weapons to fight off viruses. Previously-infected patients typically produce “memory cells” that can recall certain pathogens and quickly mobilize a defense against reinfection.

Still, Fauci cautioned having a false sense of security. A handful of people who recovered, have contracted COVID-19 again.

“I think there are so many unknowns, we better put a pause and say, we’re not going to make any definitely statements about what an antibody test means, except to say, you were infected,” Fauci explained.