The city of Atlanta is trusting potential shoplifters, pot users and illegal drivers to return to court, requiring nothing but their signature to get out of jail. 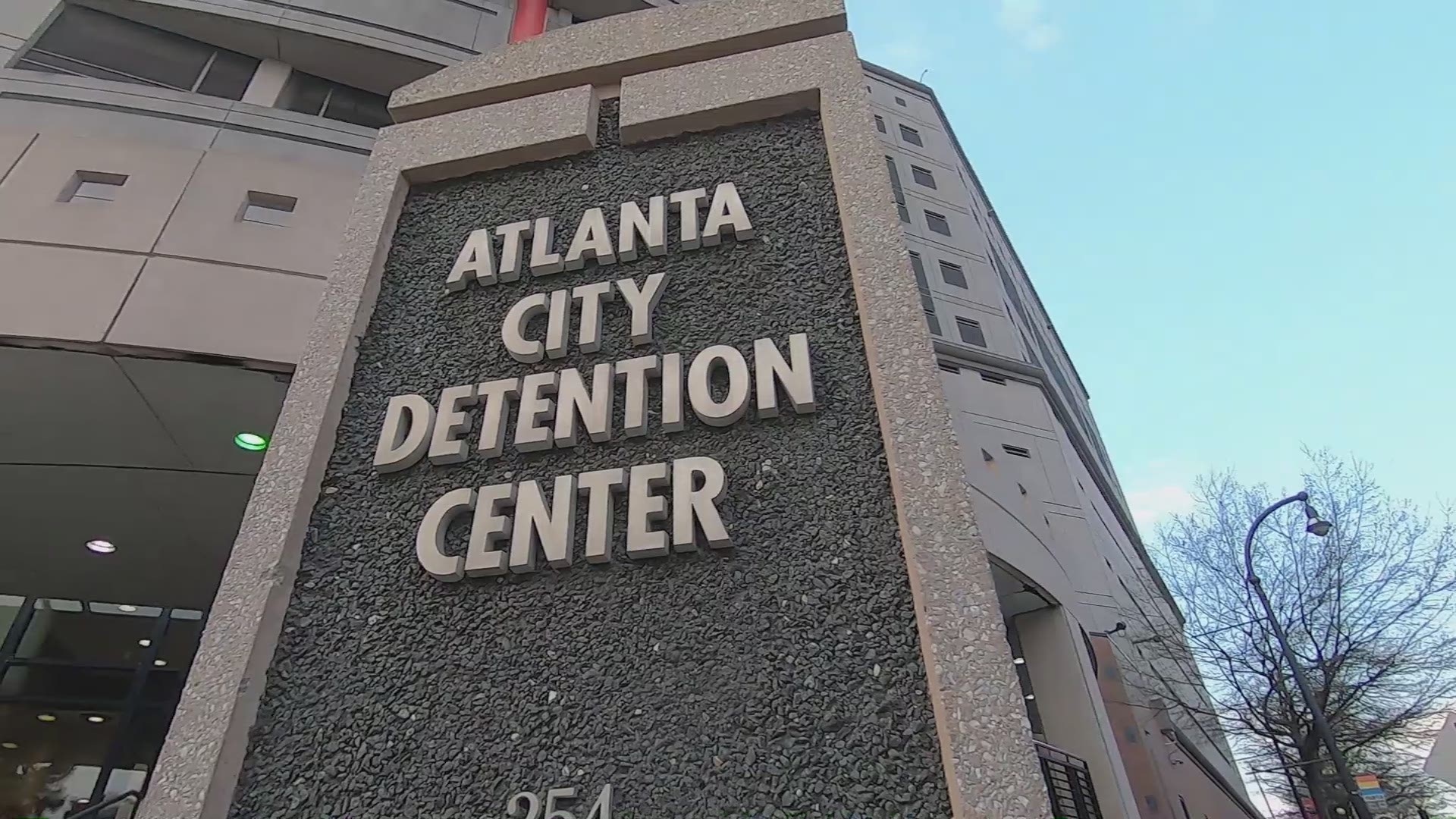 ATLANTA — Donna Smitherman sits in clear view of the Atlanta Detention Center as she talks about her arrests.

“I don’t want back in there, ever,” she said, with a chuckle.

Smitherman said she’s always had a job and roof over her head, until last year. She moved to Atlanta with her husband to take a job rehabbing an apartment complex. Part of their pay included housing in one of the units. But she said one day, the owner showed up with news -- he’d decided to sell the building instead.

With no family support system or savings to fall back on, they ended up on the streets.

“We ended up setting up a tent up over by the zoo. We had all of our stuff in a duffle bag and we woke up one night with two men with sticks hitting us and they took our duffle bag," Donna said.

Inside the duffle bag was the little money they had left, their IDs, cell phone and clothes. That’s when Donna said she started begging by the freeway. Her sign said, “homeless and hungry, please help.”

It was that sign that led to her arrest, three times. Twice she was able to get out immediately on a signature bond, thanks to the city’s new bail policy. But each time, Donna ended up as a failure to appear (FTA).

“Because honestly living out there, you don’t keep up with the time,” explained Smitherman. She said she had more immediate concerns, like what to eat and finding a safe place to sleep.

Still, Tiffany Roberts with the Southern Center for Human Rights said Smitherman is just the kind of person bail reform is supposed to help. It was this group that led the campaign for change.

“I think it was a courageous first step,” Roberts said.

The idea is to prevent people who can’t afford to pay bond, from having to wait days to see a judge before they’re released. But now it appears it’s the court that’s waiting on them.

11Alive Investigators spent a morning in Judge Christopher Ward’s courtroom, where five days a week he hears nothing but FTA cases. According to the Atlanta Municipal Court, the number of people failing to appear has increased 40 percent in the past year.

In a statement provided by the court, a spokesperson said, “We live in a society governed by laws. We should all be concerned if trends show a disregard for the law. Orderly communities are based on citizens obeying the law and following the rules.”

Roberts isn’t convinced the rate increase is related to bail reform and the court would agree -- the problem is getting worse for many reasons.

Signature bonds for jail detainees only account for a small percentage of all the 260,000 cases the court handles each year. But Roberts can’t prove signature bonds aren’t a part of the problem. She said the Southern Center for Human Rights has made several open records requests with the city to figure to get a concrete look at what's going on, but they've yet to receive any data that could answer those questions.

The city says the historic cyberattack that crippled Atlanta for months, was just weeks after bail reform started, impeding its ability to collect that data. But there’s no indication the city ever had a plan in place to track the impact, before the Mayor signed it into law.

11Alive's Reveal Investigators learned the jail doesn’t track who returns to court and the court doesn’t track how a defendant is released from jail. So, we decided to build the database ourselves, manually cross referencing every person arrested, with the court’s system.

Due to the cyberattack, we only studied arrests after mid-June when the court systems were restored. Our request was made in December, so the data stopped at December 6, 2018. But in that time, there were 3,069 people released from the jail on a signature bond.

30 percent of those people have yet to ever show up in court. The most common offenses are driving on a suspended license, possession of marijuana and theft by shoplifting.

But it’s unclear if that has happened yet. According to Roberts, the city passed an ordinance to study the court notification system, in hopes of improving the FTA rate. But it has yet to be funded.

She said there are providers that will work at low cost, or even no cost, to set up text alerts reminding people of their upcoming court date. The technology could even allow someone to reset their court date through their phone.  A study could determine if that type of technology, or other tools, could be effective here.

In that meeting, residents expressed an overall frustration with the Fulton County regional court system. They disagree with the decision to release violent offenders from jail on a signature bond.

“All we’re asking a Magistrate [Judge is], before making the decision whether that person should walk out the door, you should have the person’s criminal history in front of you and the police report,” said Atlanta Police Chief Erika Shields.

She even encouraged residents to contact the judges to express their dissatisfaction. But, both Shields and Mayor Keisha Lance Bottoms said what’s happening in the city’s jail and court is different, because these are misdemeanors, not felonies, and most of the offenses that qualify are non-violent or violations of city ordinances.

“The city jail for years has really just been used as something of a mental institution, a rehab facility. It’s been the area where we take the people we really don’t know what to do with them,” explained Shields.

Bond questions if that’s true, how arresting a person only to release them two hours later solves the problem. And even if the people arrested are on drugs, homeless or mentally ill, there’s still a victim that deserves accountability. Take a crime like urinating in public.

“If you have someone continuing to urinate in the door of your… business, people aren’t going to come in there to shop or buy food. So, no crime really, truly is victimless,” argued Bond.

Bond admits, the council voted unanimously for the measure. He says the council wanted to show support for the new Mayor. He now believes that was a mistake.

11Alive made repeated requests to talk with Mayor Bottoms about the ordinance and its impact, but our requests were denied. The jail also deferred any interviews to the Mayor’s office. Only the courts would talk openly with The Reveal. But the Mayor did defend her decision at the town hall in Buckhead earlier in March.

“Let me be clear, the people who were housed in the jail, if they had simply had the $200 to pay to get out, they would not have stayed in jail,” she told the crowd.

Roberts said that’s the point often missing in the debate. She said critics often confuse the purpose of bail with sentencing.

“Bail is a condition of release for people who are incarcerated before they are found guilty. We should not be looking to hold on to people who necessarily assume the presumption of innocence,” Roberts said.

She said the city could reduce its FTA rate with better communication, not only with defendants on when they need to be in court, but with the city’s own departments. During our research, we found two dozen cases where the jail made an arrest, but the court has no record of it.

And even when it’s clear the defendants didn't show up, judges aren’t always holding them accountable.

While Judge Ward warned those in his FTA court that failing to appear would result in an arrest warrant, we discovered not all judges are signing them. Without that signature, the warrants don’t become active and police are never told.

When Mayor Bottoms signed the ordinance change into law she said, “We still have the FTA mechanism in place. That will not change. This will be about collaboration with all of our stakeholders including our municipal court, judges and also our corrections department.”

But The Reveal found 55 percent of the FTAs studied - never became active warrants because they were not signed by the judges. The court couldn’t issue warrants in 22 other cases due to errors in the information provided or entered into the jail and court systems.

Benjamin Rucker was arrested by MARTA police for trying to hitch a ride on the train without paying. He was given a signature bond from the jail, and never showed up to court. But the warrant wasn’t signed.

So, when Walmart accused Rucker of trying to steal four watches, Atlanta Police wrote him a citation at the store and let him go home. Rucker hasn’t gone to court on that charge either.

Judge Ward insists accountability is still there though, because even if the FTAs don’t become active warrants, the cases remain open – for more than a decade if necessary - until the defendant is arrested again or comes to court voluntarily.

Those that do show up to court can get their FTAs cleared within hours and have fees associated with the charge dismissed. Investigator Rebecca Lindstrom asked several of them why they missed their first court date. Defendants gave similar answers – they got caught up in traffic, didn’t like court, confused the date or simply forgot. They showed up on this day because they either had the promise of a new job, got tired of taking Uber, or had received another ticket.

Finding people who skip their court dates, isn’t always easy. We tried to find a man accused of starting a fire in the parking lot of a Checkers fast food restaurant. Turns out, he gave police a fake address.

Several others on the list were apparently homeless and had no address at all, people like Smitherman. It was on her third visit to jail, that she asked about the city’s pre-arrest diversion pilot program, or PAD.

“[They] took me off the streets, provided housing, food,” said Smitherman.

Once Smitherman finally gets the paperwork needed for a new ID, she also hopes to get a job.

PAD is a two year pilot, funded through the City of Atlanta, Fulton County and private donations. Right now it only targets people who might otherwise be arrested in Zone 5 and parts of Zone 6, which covers downtown, Old Fourth Ward and parts of Midtown and English Avenue. Along with a limited service area, it also has limited hours.

Still, it's been able to make a difference in the lives of 88 people.

PAD organizers hope the success of the program leads to more funding and a greater service area to help those homeless due to mental illness, addiction or simply the hard knocks of life.

“It’s kind of like a domino effect. When it rains it pours and finally I found a ray of sunshine,” says Smitherman.

Grandfather's rights: can your own parent take your child?