At least 267 children 12-years-old or younger have been arrested in Atlanta over the past five years. Some of them handcuffed. Should police policy change? 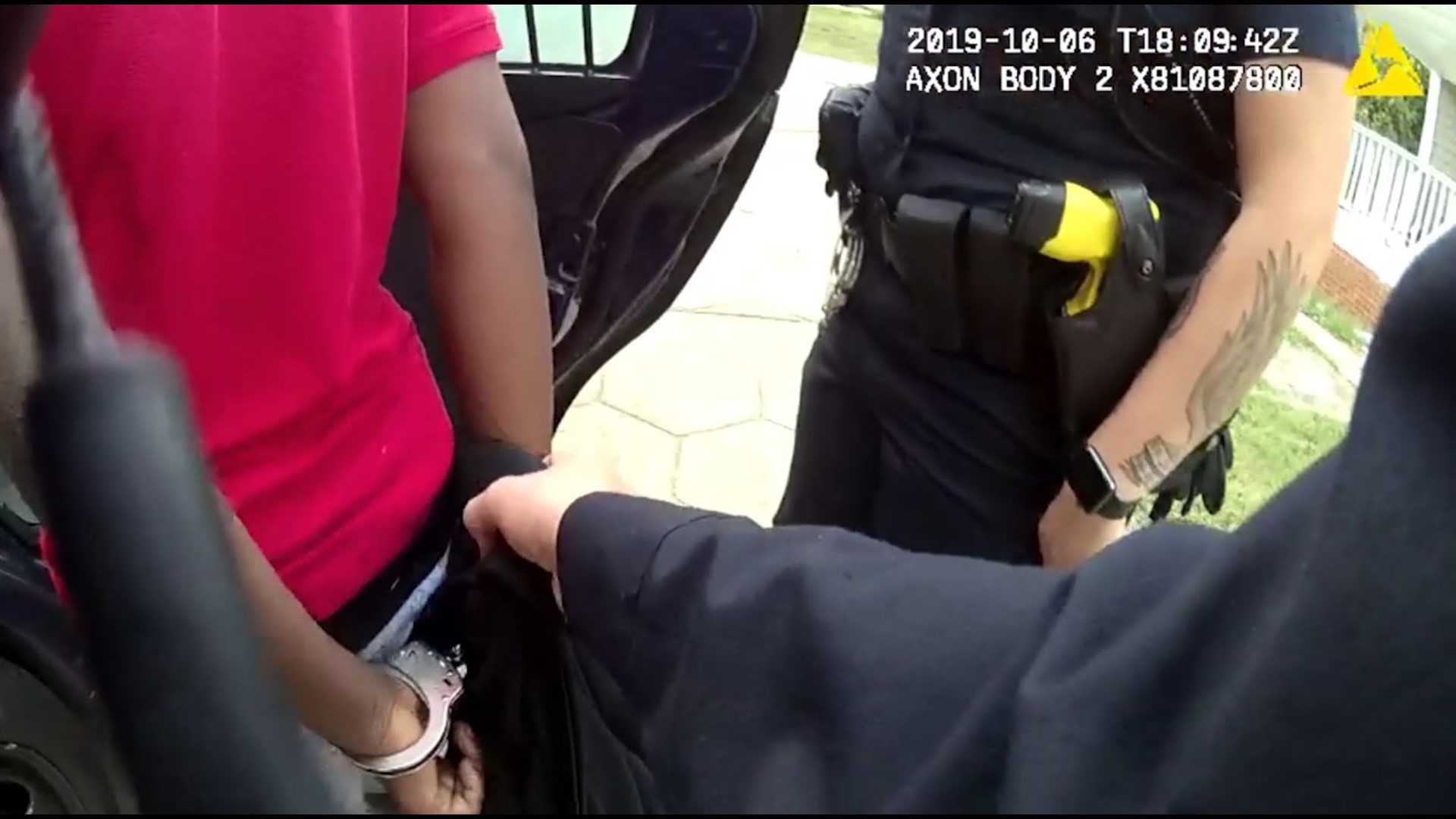 ATLANTA — A Georgia judge is condemning how the Atlanta Police Department handled the arrest of a 10-year-old boy.

The criticism comes after 11Alive's investigative team, The Reveal, obtained video of the incident, which shows the elementary student handcuffed for hours. The arrest also raises questions about the policy that allows the practice and the potential long-term harm it has on a child.

The arrest happened on Oct. 6, 2019 in a south Atlanta neighborhood.

When two Atlanta police officers responded to the scene, they discovered a 13-year-old boy accusing a 10-year-old of pointing a weapon at him following an argument during a neighborhood football game.

The grandmother of the 13-year-old called the police to report the incident.

“Who had the gun?” an officer asked the 10-year-old, according to the body camera video. The child replied, “It was a cap gun.”

The elementary student never runs away, is not combative or denies having a weapon. Instead, he walked the officers two doors down to a wooded area barefoot, where he told them he tossed it.

Instead of searching for the alleged gun, the officers walked away.

“I’ll tell grandma it’s a BB gun I guess. I’m not going in the woods,” one of the officers said.

“I’m not going in the woods, either,” the second officer responded.

Twenty minutes later, an officer walked into the 10-year-old’s home without asking for permission or requesting to speak to the child’s mother. The officer doesn’t search the child’s room.

The officer then asked the child to put on shoes and handcuffed him behind his back.

“Can you put [the handcuffs] in front of me?” the child asked the officer. The officer said no. “It’s gonna hurt my back,” the child replied.

The child’s mother, Johnny Harris, pleaded for the officer not to handcuff her son. “I practically begged,” Harris said.

This was the child’s first interaction with law enforcement. After the officer transported the child to a nearby police precinct, he was shackled to a bench for nearly three hours until his mother picked him up.

'Why are we arresting him?'

“Why are we arresting him? Why did this escalate to, 'we’re talking to one party. We talked to the other party'" she asked. "Without the gun, all it is, is a tiff."

She also criticized the officers for not attempting to find the weapon.

“So, you’ve marred his record forever without even looking for it?" Strickler questioned. "If you’re telling me it was a serious situation to make these charges, but yet, you don’t look for the gun? (It's an) absolutely wide hole of disconnect. I don’t understand that."

Atlanta’s interim Police Chief Rodney Bryant agreed that the officers should have made more of an attempt to search for the weapon.

“That is concerning," Bryant said. "Anytime we believe there is a weapon in an area and we don’t do our due diligence."

The chief would not say if the officers would face disciplinary action. Instead, he wants to know more about the wooded area where the cap gun was allegedly thrown to see if it was feasible to conduct a search.

“It’s not unusual for weapons to be thrown in sewers, in lakes, in creeks,” Bryant said. “I would have to take a look at the area of concern.”

According to officers’ body camera video, they requested a K-9 unit to assist in the search, but it’s unclear if one was available.

The October 2019 arrest mirrors similar incidents captured on police body cameras and cell phones over the past few years throughout the country.

This past August, officers in Key West, Florida arrested an 8-year-old boy for allegedly hitting a teacher. The boy’s wrists were too small for the handcuffs.

In September 2019, an Orlando Police officer arrested a 6-year-old girl at school after she had a tantrum and hit three employees. In the body camera video, the girl cries out “please give me another chance,” while the officer takes her to a patrol car with zip ties around her wrists. The handcuffs were too big.

In each case, the officers claimed they were following department procedures.

"I hate to tell you this, but maybe with kids you need to re-look at that procedure,” Clayton County Chief Juvenile Court Judge Steven Teske explained.

Biggest pet peeve is detaining elementary age kids. Very, very, very few kids this young commit crimes so horrendous that they should be locked up. I banned detention of kids this young, and in doing so, have improved the administration of justice & social justice. Watch Thursday https://t.co/iFRwFkdOMM

In 2003, Teske said Clayton County reformed its juvenile court system, which includes not handcuffing children unless it’s an emergency. Since then, juvenile crime has dropped 80% in the county.

"If we already know the research shows that kids are twice as likely to drop out of school, to become more criminogenic, when we handcuff them and detain them, then maybe we need to ask ourselves, 'hey, systemically, should we take another look at these procedures and look a little more at criteria when a handcuffs should go on a kid who is not acting violently at the moment?'” Teske proposed.

Earlier this year, Washington, D.C.’s police department announced they will no longer place juvenile suspects 12 years old and younger in handcuffs, unless the kid presents a danger to themselves or others. The policy change came after a series of arrests recorded on cell phones.

In Atlanta, officers have arrested at least 267 children who were 12 years old or younger over the past five years, most for minor offenses, like property crime.

The department said it doesn’t know how many of them were handcuffed.

After reviewing the 2019 arrest of the 10-year-old, interim Chief Bryant said the department will now consider changing its policy.

“I think that is one that we can take a look at and re-evaluate,” Bryant conceeded. “I want to be clear, that is never our intention - to traumatize a child."

Bryant said he would also consider reaching out to Clayton County to see if Atlanta can replicate similar reforms, but he cautioned that each situation should be assessed differently.

“I think you need to take everything it’s totality. I know 10-year-olds that are stronger and taller than you, and I and that can be very concerning, especially when they become violent," Bryant said.

No response from Atlanta Mayor

The Reveal requested an interview with Atlanta Mayor Keisha Lance Bottoms multiples times over the past few weeks. A spokesperson declined on her behalf and did not provide a comment or statement in regards to this investigation.

Over the summer, Bottoms was front and center after violence broke out in Atlanta following the deaths of young black men killed by law enforcement in Atlanta and across the country.

She expressed concerns over police brutality and how it disproportionally impacts young black men.

The mayor is the mother of four children. Two of them are 9-year-old twins, and one is a 12-year-old boy.

“Our communities are sick and we are tired of dying,” Bottoms said in an interview with Axios published online in June.

Our voting plan was a family plan. Lance voted for the first time in the most important election of his lifetime. #BidenHarris2020 #WhenWeAllVote pic.twitter.com/ZaQEkUEdj1