'Waiting on a non-existent court date': Still behind bars for nearly four years, David waits for his day in court

Would you be willing to serve on a jury during the pandemic? Until there are jurors, there can't be trials. 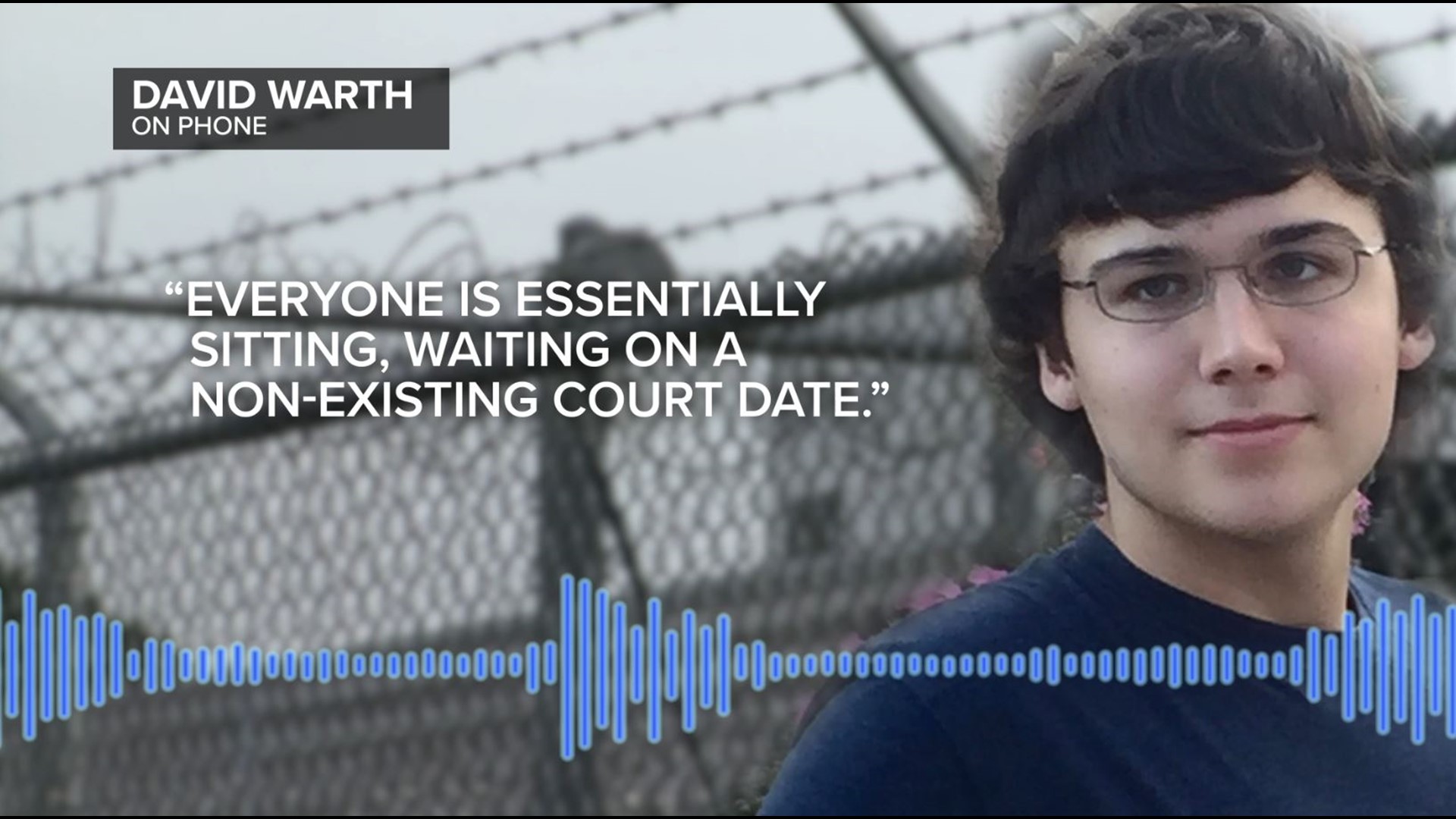 GWINNETT COUNTY, Ga. — Innocent until proven guilty doesn’t mean you’re free until trial. COVID-19 has convicted thousands to a lengthy jail sentence as courts figure out how to hold jury trials without spreading the virus.

It will be up to the public to help solve the legal limbo.

David Warth has been behind bars in Gwinnett County for nearly four years determined to clear his name. Just days before his trial was finally set to start, courts across the state were ordered to close.

Even days before the decision was made, David’s parents were caught up in the debate over how to keep jurors and participants safe. Brian and Deborah Warth are both medical professionals at area hospitals.

“They didn't want me to be in there as a first responder directly, every day exposed to COVID patients,” Brian said.

With the trial on hold, David’s attorney asked to have the charges dropped, or at least to grant bond. But the Gwinnett County district attorney’s office said David’s only option was probation, implying he would first have to plead guilty to the charges against him.

“That would only escalate things and push him into a prison situation for a crime he didn't commit,” his mother said.

David is accused of using the dark web to send a letter to a former high school teacher threatening to kill her.

RELATED: Brilliant musician and student, behind bars accused of threatening to kill teacher

Many stuck in legal limbo

David is just one of nearly 1,595 active cases as of mid-October, trying to make its way through the court system in Gwinnett County. That number doesn’t even include the 871 cases the DA’s office was ready to present for indictment.

Grand juries will return to the court before trial jurors. In some communities, that process is already underway. Forsyth, Fulton, and Gwinnett counties have sent summonses to potential grand jurors hoping to begin hearing cases in November.

RELATED: 'Y'all guaranteed me that you'd watch him': Father warned jail staff his son was suicidal before his death

The Justice said his first priority is safety but said he is concerned about the amount of time it’s taking to get the process started again.

“Each one of those cases that is in the backlog represents some real meaningful questions that impact lives that need to be resolved," Melton said.

While it’s easy to assume everyone in jail is guilty, according to the Bureau of Justice Statistics, a third of all felony trials do not end with a conviction.

Most metro counties, such as Cobb, Forsyth, Fulton Gwinnett, and Hall have said they will not hold jury trials until January. If COVID-19 cases increase dramatically, jury trials could get pushed back even further. But courts are starting to submit plans for how they will hold trials when the time is right.

“I can’t say enough about how important it is that we get started back, that we find a way to do this during the pandemic,” Forsyth Superior Court Judge Jeffrey Bagley said.

Judge Bagley told 11Alive's investigative team, The Reveal, space limitations may force the county to hold only one criminal jury trial at a time. The court is trying to determine if it will be possible to also hold a state civil trial since that only requires six jurors instead of 12.

Forsyth County hired an architect to suggest ways the court could transform its large jury assembly room into a trial court. The plan involves physically shifting a doorway, adding a sound system, and a lot of plexiglass.

The court will also pass out clear masks to make it easier to understand what’s being said and how they’re saying it and some trial participants may get a rapid COVID-19 test each day.

The tests each cost $14 plus the cost of hiring a medical technician to administer. Judge Bagley said he’s committed to doing what needs to be done to keep participants safe, but also wants to make sure they’re spending money wisely.

Each court must submit its plan to the Administrative Office of the Courts. The Reveal reviewed those plans, which vary greatly in detail. Several of the pandemic plans openly admit that it could take years to clear the backlog in cases.

In Jackson County, the court plans to allow witnesses to testify from where they’re seated instead of taking the stand. Hall County is holding a pilot trial in November to learn what works best before setting the 2021 court calendar.

In all of the plans, which often detail how many people will be allowed in an elevator to the capacity of each courtroom, safety is key because all of this hinges on jurors showing up.

“You're also asking the citizens of the state to get up off their couch and come to a building. And you're not really asking them. You're telling them that they must come. So, we've had to be extra careful to provide for their safety,” Justice Melton said.

Justice Melton believes the fallout for the courts will go beyond backlogs. He predicts strains on county budgets will lead to less staff able to manage caseloads and some operating procedures will change for years to come.

Justice Melton also anticipates some of the changes to court proceedings to account for COVID-19 will lead to new reasons for appeal.

“My last bill from Securus Tech was $260-something. And that's per week,” Deborah said.

David’s family thought that, by now, he would be home, making the past seven months even harder. David is able to make calls and they schedule several video chats a day. David happened to call during our interview with his parents and added his perspective from jail.

“Everyone is sitting waiting on a non-existent court date,” David said. “They don’t know why they’re here or what they’re waiting on.”

David said he feels some people are taking pleas just to get out of jail.

“I feel like it is a coercion tactic,” he said.

Justice Melton believes that, too, is a concern, but said the frustration likely goes both ways.

“I know the state probably feels like they're being asked to provide them some options that they otherwise wouldn't put on the table,” Justice Melton said. “But we don’t want COVID to be leverage.”

RELATED: Jury trials to resume in Georgia with COVID-19 precautions in place

Gwinnett’s inmate population did start falling in March and continued to drop until the end of the summer. That did not happen in 2019. More lenient bond restrictions and plea deals likely helped reduce those 2020 numbers, but the DA’s office said it has also worked to close 1,560 cases without a jury trial.

Those cases would have most likely been resolved through a negotiated plea or diversion program. It’s unclear how many of those defendants were behind bars or if any of them had their charges dropped.

Regardless, the Warths said none of that has helped their son. And there's the teacher as well, who wants peace of mind that the person who sent the disturbing letter is held accountable. For that, they will both have to wait. For that, they need a jury.