During his campaign, the family claims the District Attorney said he would investigate Kevil Wingo's death. Months after elected, it hasn't happened. 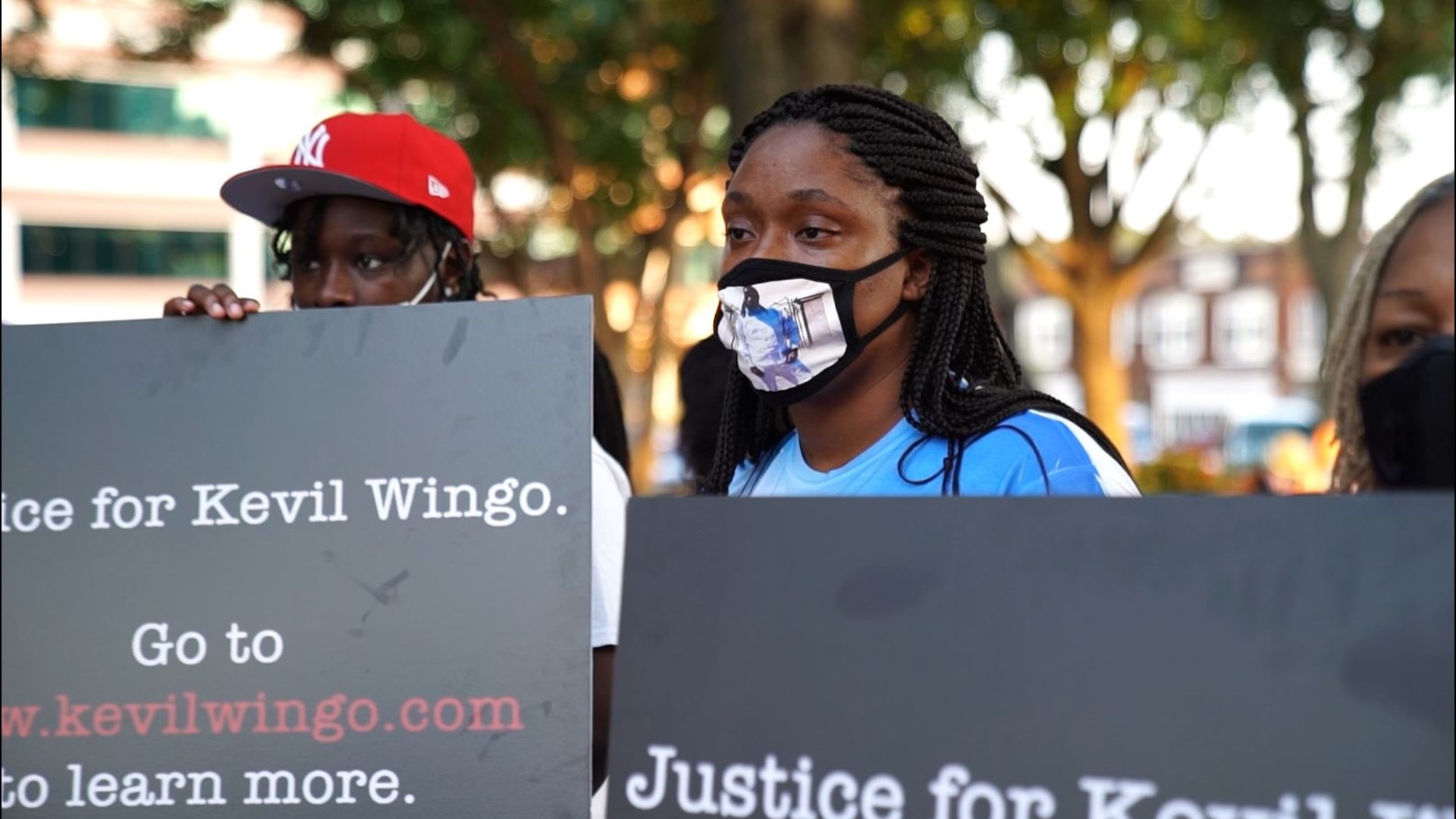 COBB COUNTY, Ga. — Kevil Wingo died in 2019 while in custody at the Cobb County Detention Center. Video and audio recordings uncovered last year by 11Alive's investigative team, The Reveal, show the 37-year-old father repeatedly collapsing, pleading to be sent to the hospital and complaining of difficulty breathing for eight hours before he died.

Wingo’s family claims the county’s new district attorney has not kept his campaign promise to investigate Wingo’s death, and a sheriff’s attempt to launch a criminal probe, has been blocked by the state’s top law enforcement agency.

There was a glimmer of hope while holding back tears when Kevil Wingo’s family joined an October rally calling for accountability at the jail where he died.

“We are here today to seek justice for the 50 individuals that died at the hands of the Cobb County Adult Detention Center, including my brother,” Tiffany, Wingo’s sister, said. She was surrounded by about two dozen family members and community organizers in Marietta Square, a few blocks from the county courthouse.

She was hopeful because the former Cobb County district attorney had just requested a federal investigation into Wingo’s death and others who have died at the county’s detention center.

The request followed The Reveal investigation that uncovered jail video of the 37-year-old father of three having a medical emergency in September 2019, repeatedly begging to be sent to the hospital for nearly eight hours, while struggling to breathe.

“I’ve got an idiot playing games trying to get to the hospital. He’s just playing around,” a deputy said at the time calling to request assistance with Wingo.

The jail nurse in charge refused to check his vitals. Instead, she put him in a padded room to mute his screams for help. He died 59 minutes later from a perforated ulcer.

Tiffany Womack, a lab tech at the time, tried to help Wingo. The nurse told her no.

“It has bothered me. He was looking at me and he asked for my help,” said Womack in a recorded interview with sheriff investigators holding back tears in 2019. “I played it back a million times. Maybe I should have just over-rode her and ask the deputies, ‘just pop the door. If I get in trouble, I get in trouble.’”

Four weeks after The Reveal released the video, former District Attorney Joyette Holmes announced that she asked the federal government to launch a criminal probe.

In a September 16, 2020, prepared statement, Holmes wrote that the jail video uncovered by The Reveal “should be a part of an independent investigation into Mr. Wingo’s death and other inmate deaths at the jail,” Holmes said. “It is for this reason that I have asked the U.S. Attorney for the Northern District of Georgia to conduct an independent investigation of the recent inmate deaths at the Cobb Adult Detention Center.”

About five months later, it’s uncertain where the investigation stands or if Wingo’s family will ever get the independent investigation they’ve demanded since his death.

A spokesperson for the U.S. Attorney’s Office declined to comment or confirm if an investigation is underway. Even if the federal government does investigate, it’s unclear whether the U.S. Attorney has the authority to bring state charges, like felony neglect, which some believe they witnessed in the jail video.

On February 4, Sheriff Craig Owens sent a letter to Vic Reynolds, the director of the Georgia Bureau of Investigation to “re-open the investigation into the death of Kevil Wingo.”

The GBI’s review of Wingo’s case was not a criminal investigation.

Administrative reviews only look into whether investigators followed policies and procedures. That means GBI conducted no new interviews. It didn’t attempt to gather evidence at all.

“It’s not enough because that’s not specifically what the sheriff asked him to do. The sheriff asked for them to do re-open the investigation,” Gardner said. “It has been almost a year and a half now and we still can’t get anyone to do a proper investigation into Mr. Wingo’s death...despite the clear evidence of criminal conduct being committed against him.”

Wingo’s attorney isn’t the only one who believes a crime happened.

A few weeks ago, Wingo’s family sent a letter to her boss, district attorney Flynn Broady, elected to office this past November.

The letter outlined evidence in Wingo’s death they believe was criminal. It also asked for Broady to re-open the investigation. Broady declined to investigate.

► READ | The letter from Kevil Wingo's family to DA Broady

According to Gardner, Broady said he would not investigate Wingo’s case because the previous district attorney had recused the office due to a conflict of interest.

Broady declined interview requests for this story, but his new assistant chief told The Reveal in 2020 that she believes Wingo was the victim of a crime.

“I mean, clearly there is criminal negligence. We all see it on the tape,” Yeager said in an interview with 11Alive on September 15, 2020. “From the evidence that I’ve seen, is it enough to take absolute criminal charges? Yes it is.”

"It sounds like you’re saying, they don’t even need GBI to investigate because there is already enough evidence to take this to a grand jury,” Reveal Investigator Andy Pierrotti said in response to Yeager’s legal analysis.

It wasn’t the first time Yeager publicly expressed her belief Wingo’s death was criminal. In an opinion published in the Marietta Daily Journal on August 27, 2020, Yeager called for the former DA to launch a criminal probe.

“The facts of this case are no less tragic than those surrounding the death of Ahmaud Arbery. In fact, I would argue that this is far worse,” Yeager said in the opinion piece. “The video which shows the inexcusable treatment and total disregard for the welfare of Kevil Wingo, which ultimately resulted in his agonizing death has been made public.”

Wingo’s sister says Broady told her he promised to re-open her brother’s investigation if elected as the county’s new DA. She spoke to Broady in person because he attended the same October rally.

“All lies. Nothing but lies,” Tiffany said in response to the DA’s current posture.

“We find it disheartening and frustrating that the investigation into Kevil Wingo’s tragic death at the Cobb County Adult Detention Center continues to languish,” said Sally Riddle, with the Cobb Coalition For Public Safety.

“With the refusal of the GBI to open a full investigation vs. just the administrative investigation per the request of Sheriff Owens, and for the U.S. Attorney investigation that seems to be going nowhere to hold up what District Attorney Brody should be able to pursue in this case of negligent care is in itself criminal,” Riddle said.

The Cobb County NAACP weighed into the GBI and the DA’s decisions, too. “This has got to stop. People don’t go to jail to die,” Jeriene Grimes, the chapter’s president, said.

RELATED: 'He didn’t have to die like that' | Leaders call to reopen investigation into Cobb County Jail death

“It is time for some accountability to be held. I’m hopeful for that,” said Grimes.

Gardner said Broady promised him he did not have any conflicts of interest that would prevent him from investigating or prosecuting Wingo’s death.

The Reveal's 'Believe Them' Investigation: