Woman prays for healing on 911 call after brother's shooting rampage

Tommy Burns is a fan of Batman.

It’s a suitable character for someone involved in the film industry. Like Batman, Burns is athletic and strong. Neither have super powers, but both try to live with integrity. Life is an adventure.

Burns says it's true more than ever, now that he sits paralyzed in his wheelchair.

“I used to tell people all the time, I’m never dying,” he told 11Alive.

Then again, this Batman never thought he’d actually meet a "gun man," especially one living inside his own home.

But in February, police say King Aaron Burns opened fire inside the kitchen, shooting his father Tommy and his sister Kayla Burns. They each were struck with seven bullets. Six of them remain inside Tommy to this day.

Some are amazed neither died in the attack. Both attribute that to their faith. In the 10-minute 911 call, you can hear Kayla - and even her father - praying to Jesus for healing. As she begs for police to come quickly, she also calls out to the Lord for help.

Kayla says she went to get her phone charger from the kitchen when something made her body contract and fall to the ground. It wasn’t until she saw the blood that she understood what was happening.

Her dad, Tommy was around the corner from the kitchen on the phone.

They both could hear King reloading, but police say he put one of the bullets in backwards, jamming the gun. As Kayla recounts the day, she looks down at a damaged floor tile, a constant reminder of what happened.

“We’re already down. How more ‘down’ do you need us to be?” asks Kayla, uncomfortably reliving that day.

RELATED: Not a Republican or Democrat issue. ‘It’s a people issue’ says woman shot by brother 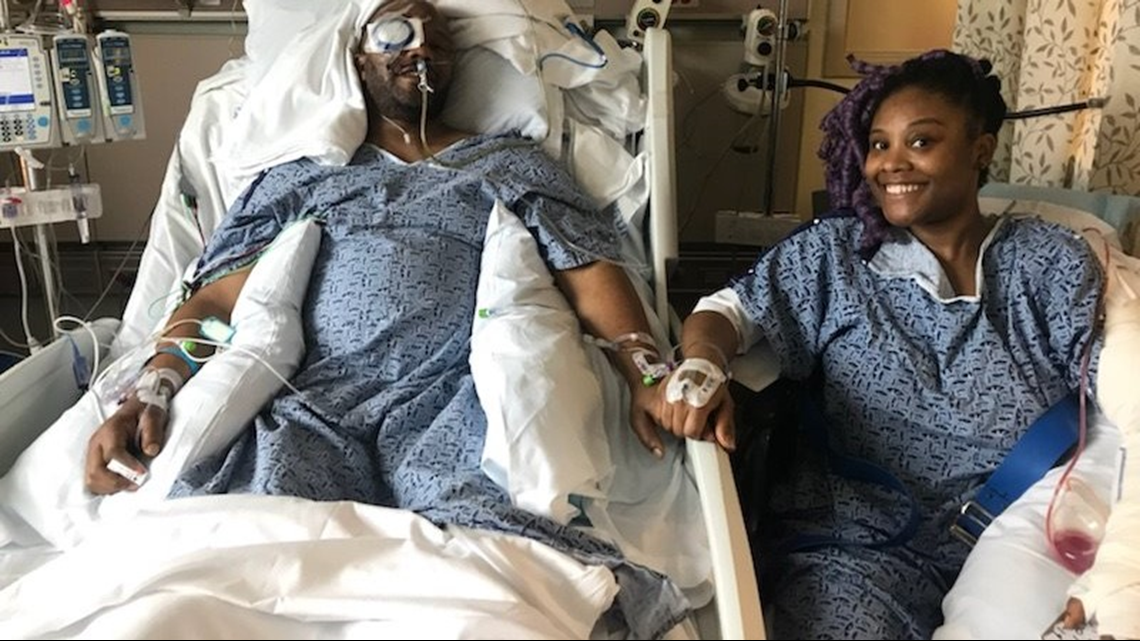 Four of the bullets went into Kayla’s left arm, shattering bones and almost severing off her hand. She still wears a support brace as she works to restore mobility. One bullet went into her foot, throwing off her balance and forcing her to learn how to walk all over again.

She was shot in the side, rupturing her spleen. There was damage to her stomach, and her two broken ribs made it painful to breathe. Even six months later, she says her organs constantly ache, a feeling that’s almost impossible to describe.

But it’s the injuries people don’t see that perhaps cause her the most pain.

“The mental battle, the post traumatic stress, the flash back, the bad dreams, the random fits of rage," she explains.

Kayla wasn’t mobile enough to return to the house until three weeks after the shooting. It was her birthday. Surrounded by her friends, she took back her space, her home, as a place of love.

“I had talked to my social worker and some people, and they were just talking about the importance of reclaiming this space and not letting what somebody did alter how you feel toward your home,” Kayla says.

Before the shooting, her main focus was building a name in the film industry. Now she tries to find ways to work while balancing physical therapy, ongoing pain and taking care of her dad.

Even during 11Alive's visit, Tommy would fade in and out of consciousness as Kayla talked with him. Her responses were immediate, but calm, proving she’s dealt with this before.

The two talk about how long he’s felt light headed and how much water he’s had to drink that day. They swap stories of recovery.

“I would feel light headed from just anything, just standing for awhile,” she says, reflecting on the weeks she spent learning to walk again.

While Tommy never wanted to face a gunman, he still emerged a hero. Unable to find King and stop the barrage of bullets, he did the only other thing he could think of to do: He jumped in front of the line of fire to try and save his little girl.

“On my way into the room, I got shot in the head, right above my right eye,” he recalls.

That’s the one bullet that has been removed, replaced instead with a metal plate to put pressure off his badly damaged eye. But the bullets inside his buttocks, left arm and hip could not be removed, because doctors say it would cause more damage.

“The last bullet that hit my spine, that caused me to hit the floor,” remembers Tommy.

He spent weeks at the Shepherd Center learning how to live independently, despite his new limitations. He says the toughest lesson was learning to get up in the morning. Despite his positive attitude for this fiercely independent man, it still remains a challenge.

“I have medication I have to take. I have to be bathed. I have to be dressed," he lists. "So, that’s the hardest thing, because I’m used to just doing that myself."

Even with these challenges, Tommy is finding ways to work. Days before the shooting he was putting together a segment for Sesame Street. Tommy has worked as a cinematographer, director and editor on projects for Lifetime, TLC, A&E, VH1 and WE.

He also helped create "Rule the Set," a series of classes for those trying to break into or learn more about the television and film industry in Georgia. Burns says he plans to return to it all after his body has time to heal.

Although, the doctors remain uncertain if he'll ever walk again.

Kayla says her phone was damaged in the shooting, but her father had his when he walked into the room. During the shooting, she was able to grab it and call 911.

According to the police report, officers found King Burns in the driveway. King admitted to police he shot his family, but said he “had to because they were threatening him.”

Tommy Burns says he sent his step-son to therapy as a teen. There weren’t any specific concerns, he just wanted King to have a safe place to talk. Tommy says concerns emerged that King might be bi-polar, but as an adult he chose not to seek treatment.

King had gone away to Dubai for work, but after losing his job, returned home. Tommy offered him a place to live, but when he failed to follow the rules of the house, Tommy gave him two weeks to find a new place to stay.

Tommy says when King told him he had a gun on layaway, he was insistent that the gun stay out of his house.

“I was pondering, 'how can I keep him from obtaining this gun?' because he’s going to hurt someone," Tommy remembers.

He says the tool he needed was an extreme risk protection order. It’s a court order that could have removed his stepson’s gun and prevented him from buying another one for up to a year. Seventeen states and the District of Columbia allow family members or law enforcement to petition the court for the protective order, but Georgia is not one of them.

RELATED: Not a Republican or Democrat issue. ‘It’s a people issue’ says woman shot by brother

“Now, I never even imagined for a millisecond that he would hurt somebody in this house with a gun, but I thought he could hurt someone and I didn’t want that on my hands," Tommy says.

King Burns was arrested and charged with aggravated battery, aggravated assault and possession of a firearm during the commission of a felony. In court, King pleaded not guilty, but was denied bond. He remains in the Fulton County Jail.

'Can't breathe. Help me,' he begged as nurses laughed. But jury may never see video

She was headed to work when tragedy struck