Dr. NaKisha Wynn, a veteran teacher at Woodland Elementary, has been on kidney dialysis since February 2018. Wynn could not have imagined that her match would soon find her - right there at the school. 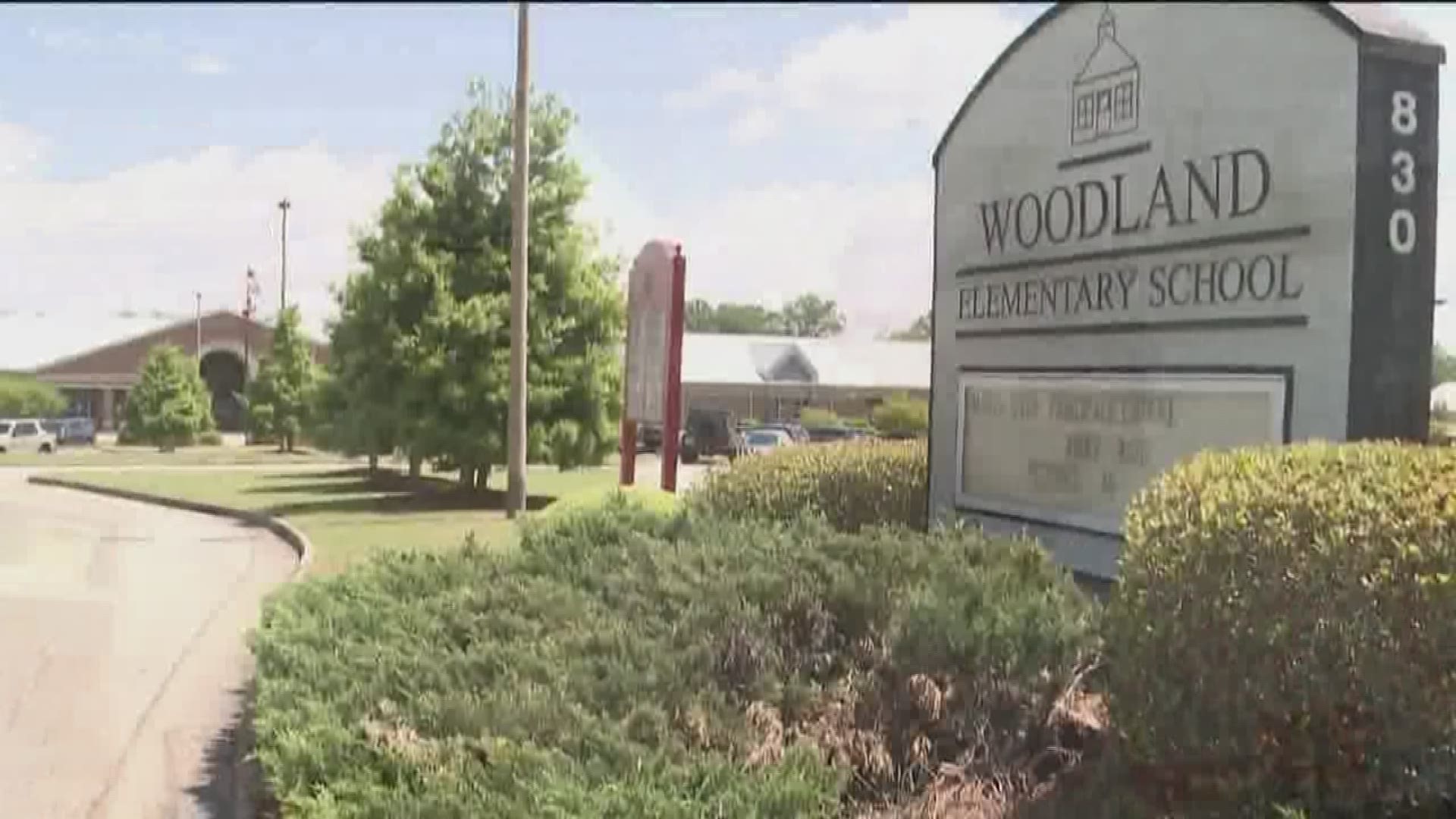 UPDATE: Wednesday, May 1, 2019-- The principal of Woodland Elementary School, Derrick Thomas, said late this afternoon that the surgeries were a success, and both patients hope to be home from the hospital by the end of the week.  Tiffany Austin, the donor, may be able to go home first, while NaKisha Wynn, the recipient, may require an extra day or two in the hospital before going home.

HENRY COUNTY, Ga. — Two educators in Henry County who have dedicated their lives to children have found out they have something else in common—something in common that, on Tuesday, will connect them with each other for the rest of their lives.

The teacher, Dr. NaKisha Wynn, in class Friday, was laughing with students who were gathered around her, listening for her heart beat.

She held her right arm up to their ears, so they could hear her pulse at the port in her arm—her dialysis port. And she was telling the children not to be afraid of what is next for her.

“I was diagnosed that I had Stage Five kidney disease,” explained Wynn.

Wynn was able to put the worried children at peace because they could hear and see that her story is not about failing kidneys. It’s a story about the heart. Two hearts.

Wynn, a veteran teacher at Woodland Elementary, has been on kidney dialysis since February 2018 three nights a week, after school. It is an exhausting, sometimes debilitating regimen that is keeping her alive.

She is “pushing through,” as she puts it, for her own children and for her students, and somehow she has never allowed herself a sick day, as if she were not ill at all.

She’s been hoping for most of that time that she might move up on the national waiting list for a kidney, despite what doctors told her a year ago.

“They explained to me it would take four to five years to get a kidney donor,” Wynn said.

RELATED: Waiting for a life-saving match

When Wynn heard “four to five years,” she went to family and friends on Facebook and asked if anyone would consider being a kidney donor for her, and for others on the wait-list, right away. And right away, she received scores of responses, including from former students and from students’ parents - people wanting to help their beloved teacher who has meant so much to so many for 25 years.

But, ultimately, she found no matches among them.

Wynn could not have imagined that her match would soon find her - right there at the school.

“I knew she needed a kidney,” said Tiffany Austin, the other veteran educator. 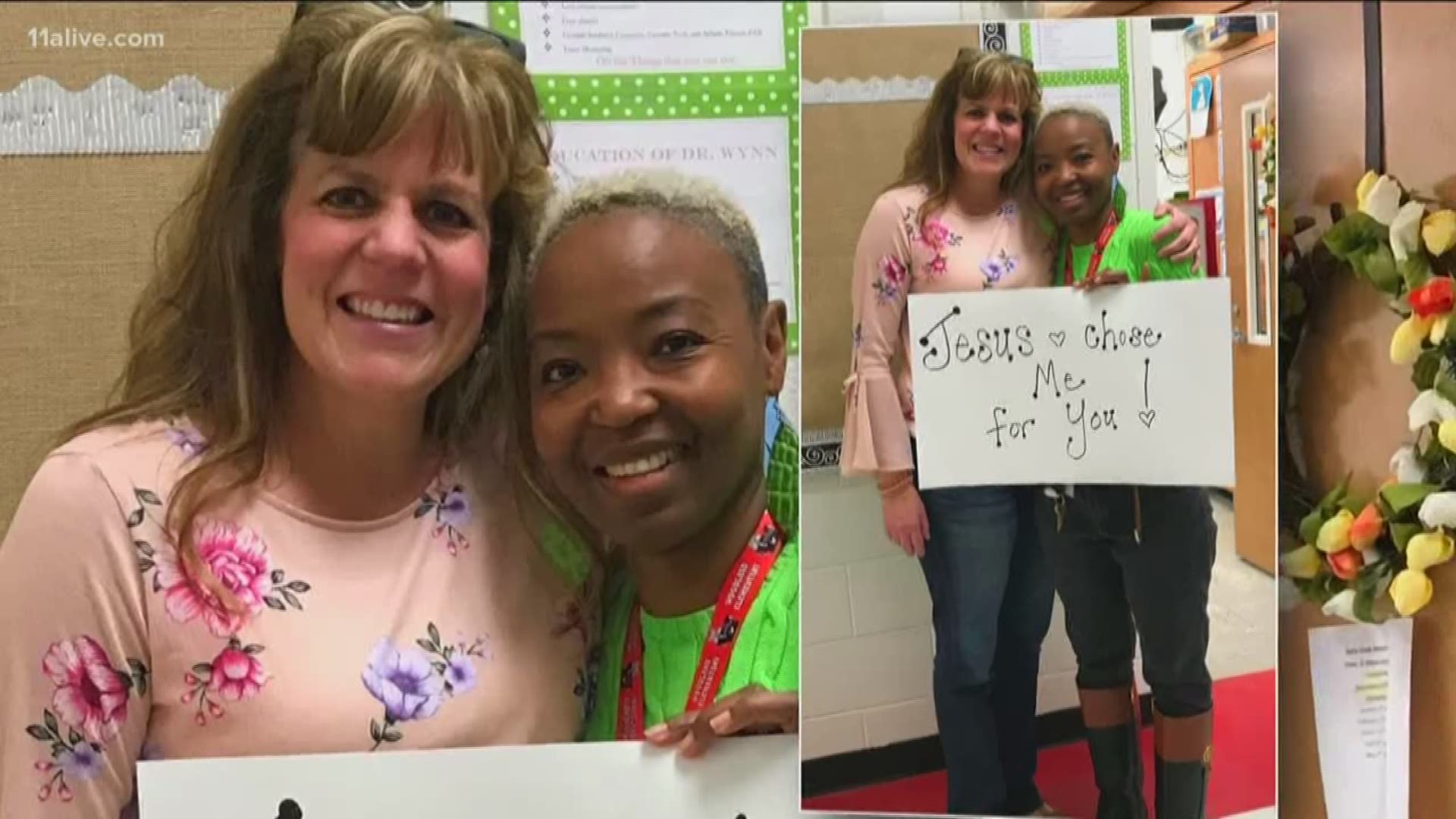 Austin, a school social worker, said when she returned to school from summer break this past July, and found out Wynn needed a donor, she knew in a heartbeat that she could not refuse what she said her beating heart was telling her to do.

“It was just so heavy on my heart when I saw her," Austin described. "It’s like my heart just kept beating harder and harder.”

Austin said she knew she had to say yes, before NaKisha Wynn had even asked her.

Last month, after six months of tests, doctors told Austin that she is a perfect match, and she broke into a run down the school hallways to break the news to Wynn.

“She ran into my room,” Wynn recalled, “then she stood outside my door and she had this sign, said 'Jesus Chose Me for You.' And I screamed. I cried.”

Austin insists that as excited as she was, she was not surprised.

“I just knew. I had a 100 percent peace that God had put us in this school together … He’d put us together just for this time,” she affirmed.

NaKisha Wynn and Tiffany Austin, sitting next to each other describing the bond they now have, embraced and laughed.

“Well, I’ll be part of your life forever,” Wynn told Austin. “In fact, we’re a married couple, in a sense. I am truly blessed. I know I tell you every day, 'thank you, thank you, thank you.' Words will never be able, I guess, to describe how I truly feel, but I will say from my family, my husband’s family, I am grateful, I am blessed, and we say thank you, and I truly love you for that. Thank you.”

“Thank you,” Austin returned. “I love you. We’re connected forever.”

And they laughed again.

The kidney transplant surgery is scheduled for Tuesday, April 30, in Atlanta. Then they will both be in recovery, at their homes, for several weeks.

They said farewell to their students Friday, who were excited, not afraid, because both Wynn and Austin were telling them they will be back the day the 2019-2020 school year begins.

“We’ll be back here in July,” Wynn said.