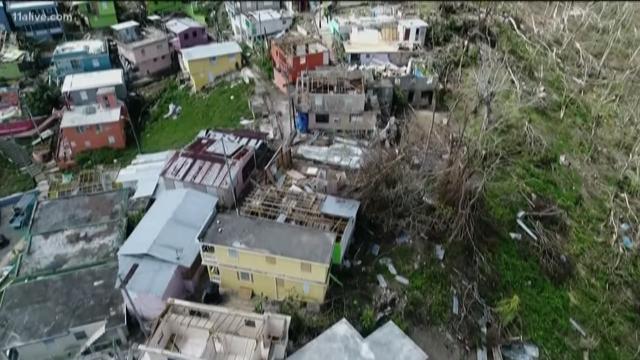 ATLANTA — Congressional leaders have launched an investigation after an Atlanta contractor was granted a multi-million dollar contract to make 30 million meals for storm-ravaged Puerto Rico. Officials said she only delivered 50,000 meals.

On her website, Atlanta contractor Tiffany Brown calls herself a diva, a mogul and a clothing designer. It boasts she is "no stranger to putting forth a strong effort to create a success." But a recent contract awarded to the local woman by the Federal Emergency Management indicates anything but.

11Alive's Faith Abubey researched the one-woman company and found that Tribute Consulting LLC has an address listed at 1100 Peachtree Street NW. She found the company rents an office from another company that rents a floor in the building.

Abubey also researched one of the subcontractors Brown hired to help fill the orders, called Cooking With A Star LLC. But a Google search for that company reveals the address is actually a P.O. box for a UPS store in East Point, Georgia. A second company called Breedlove Foods Inc. was also part of the contract, but both allegedly stopped producing meals when they did not receive payment on time.

11Alive reached out to Brown to try to get her side of the story, but knocks on her door went unanswered.

FEMA ultimately terminated the Atlanta company's contract in 20 days later on Oct. 23, before the entire $156 million budget was spent, citing "The contract is being terminated due to late delivery of the approved heater meals."

"The total meals schedule in accordance with the contract at termination is 18.5 Million short of the schedule delivery," it concludes.

Brown's neighbors are just as surprised as lawmakers that a one-woman company would be trusted with such a big government job.

"I wouldn't think that someone in a neighborhood like this would get a contract that would be that large," Randy Daly said. "I would think they'd do their background checks and find out."

11Alive did ask FEMA about what the agency did to vet Brown's company. They said they thoroughly researched Brown's company before giving her the contract, but 11Alive found out that it's not her first canceled contract with the government. She was also flagged by one government agency as "ineligible" for contracts.

So, why did FEMA go ahead and award her the contract anyway? The agency told 11Alive she was only flagged within that specific government agency that listed her as ineligible, so legally, they couldn't deny her a contract because of that.

But in a scathing eight-page letter from Reps. Elijah Cummings and Stacey Plaskett to Federal oversight committee chairman Trey Gowdy, the representatives blast the agency, writing "It is difficult to fathom how FEMA could have believed that this tiny company had the capacity to perform this $156 million contract."

But according to the Feb. 6 letter obtained by 11Alive, Brown apparently told representatives directly in a phone call that FEMA awarded her the contract because "I was able to submit a proposal to supply 30 million meals at the cheapest cost." Brown told staffers she stated she would work 24/7 to provide the meals and explained that FEMA "knew she could not independently finance the production and delivery of this many meals in such a short timeframe."

The letter goes on to cite previous failures from Tribute in failing to fulfill other government contracts, including some from the Federal Prison System. In our research, 11Alive also learned Tribute Consulting LLC has another contract with FEMA for hygiene kits, but that hasn't been activated, yet. Cummings and Plaskett ultimately ask Gowdy to subpoena FEMA in order to force the agency to release documents related to the failure to provide meals.

1 / 19
Destroyed trees and houses are seen after the passage of hurricane Irma and Maria in Orient Bay, St. Martin, on September 20, 2017. After killing at least nine people in the Caribbean, Maria slammed into Puerto Rico's southeast coast at daybreak before churning across the US territory which is home to 3.4 million. / AFP PHOTO / Helene Valenzuela (Photo credit should read HELENE VALENZUELA/AFP/Getty Images)