'I flew up, blacked out, and then I woke up on the ground' | Woman recalls being thrown off of I-85

Leslie Reese will remain in the hospital for at least several more weeks and doesn't expect to be able to walk for months, but she is just thankful to be alive. 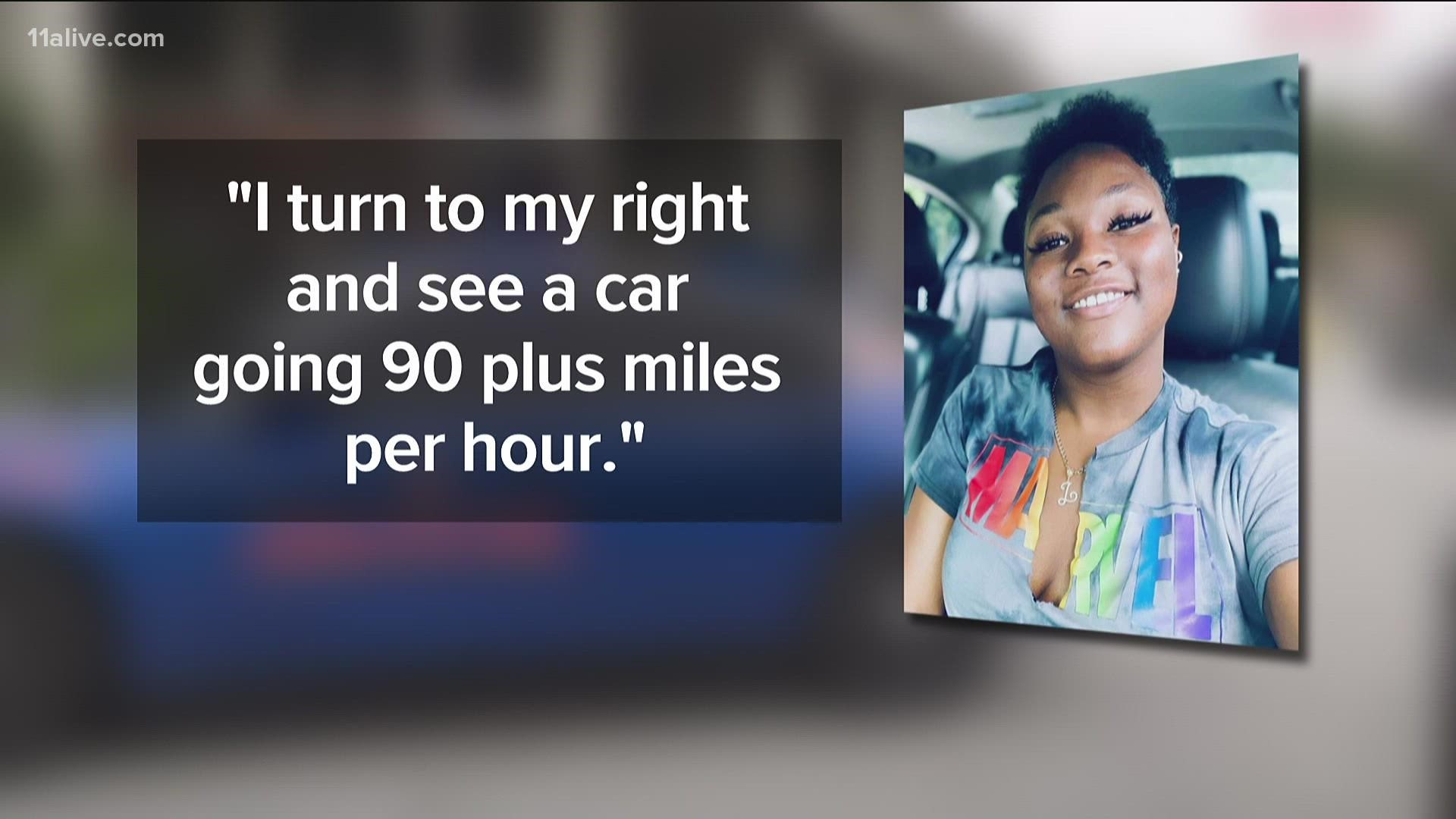 ATLANTA — On Monday a car crash on I-85 just south of Piedmont Road led to 27-year-old Leslie Reese being thrown off the interstate and falling 30 feet onto the hard grass-covered ground below.

When her car had broken down late in the afternoon, she pulled onto the shoulder.

Reese got out of her car and stepped as far away from traffic as possible as she called her best friend to come to pick her up.

"We are on the phone talking, you know just laughing," Reese said. She recalled spotting her friend on the road below and waving. "Next thing I know I turn to my right and see a car going 90 plus miles per hour.".

Georgia State Patrol determined around 4 p.m. Monday a driver of a Chevy Camaro was racing another car, speeding down the interstate, and weaving in and out of traffic before losing control of his car.

The driver then hit Reese's car which plowed into her.

"Within an instant, smack! I flew up, blacked out, and then I woke up on the ground. They were just telling me not to get up. I guess the adrenaline was still rushing and my body was still in shock," Reese explained.

Photos show the crash shoved the backseat of Reese's car into the front seat. If she hadn't stepped out of her car before the crash, she doesn't know if she would be alive.

The fall didn't cause any spine, brain, or organ injuries, but did break her left leg completely and fractured her right leg. Reese also lost some teeth, has facial injuries that required stitches, and fractured her pelvis, which required a lengthy surgery.

At the hospital, Reese has reflected on the fact that despite her long list of injuries, she is alive.

"I definitely had to take some silent time and to just meditate on the situation, and pray to god about everything. I could have lost my whole entire life and my family would have been distraught," she said.

Reese said it will take months until she can walk again and she will most likely be in the hospital for several more weeks.

For the foreseeable future, she will need to take time off of work as a residential advisor at a transitional living program that helps homeless youth. She will also have to move in with her parents for a period of time to receive necessary hands-on care until she can walk again.

An online fundraiser has been set up to help Reese with medical bills and other expenses until she can return to work.

For now, Reese remains focused on her recovery and hopes the driver responsible realizes the extensive pain he has caused and how close the crash was to being deadly.

Reese said she wants justice but also wants the driver and herself to both find closure.

"I definitely developed a lot of injury from it. I just want to tell him I'm still going to pray for him," she said.

Fulton County Jail records show the driver arrested bonded out of jail Friday but has been charged with several serious traffic violations and charges connected to the crash.