Erik Erhorn's home was built in 1870. While renovating the upstairs, he found an old letter, still in its original envelope, postmarked in 1886. 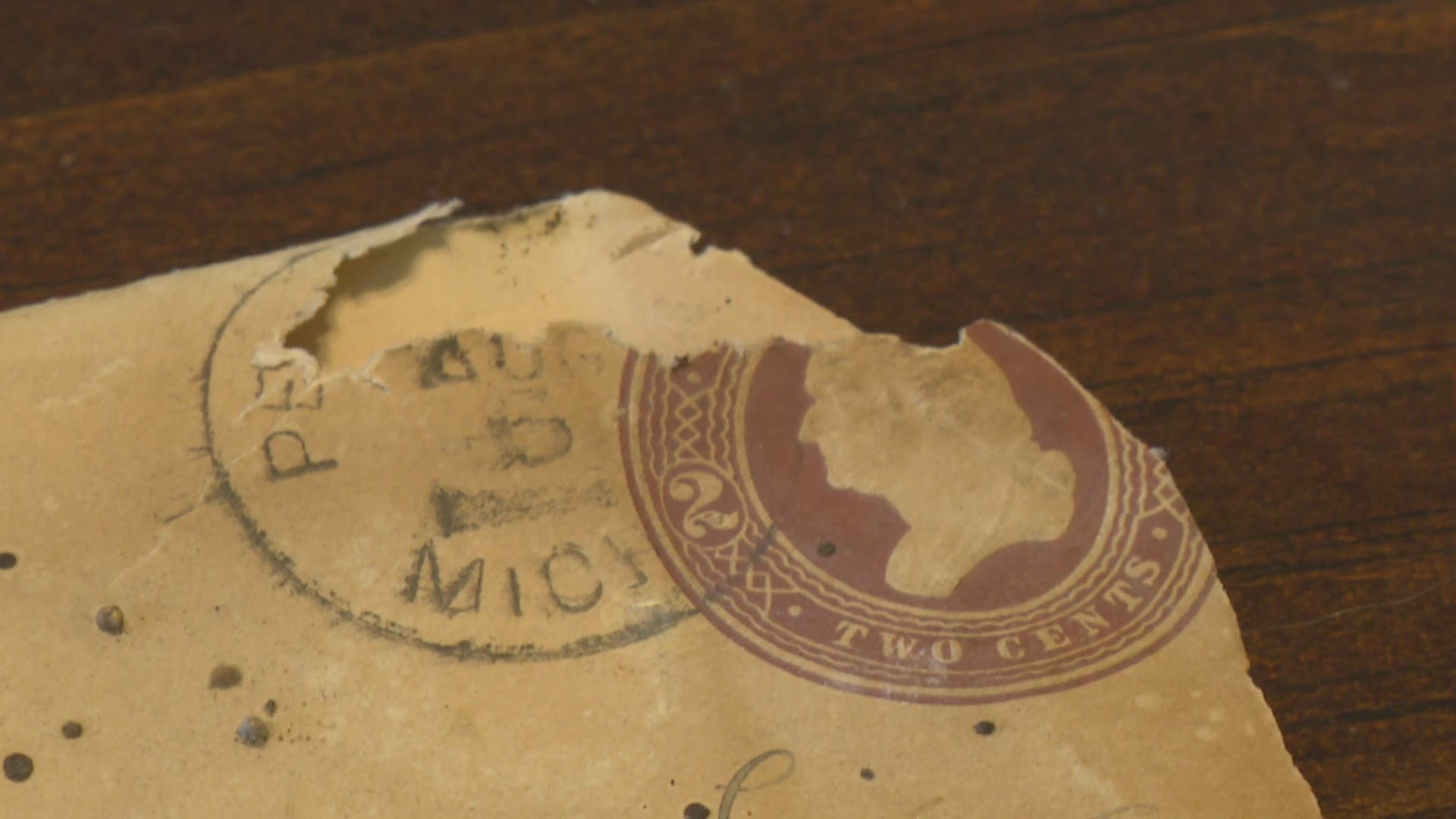 NUNICA, Mich. — Older homes often times need renovations so they can continue to be inhabitable. A farmhouse in Nunica, Mich., built in 1870, recently underwent some upstairs upgrades, and during the demolition phase, a letter - postmarked Aug. 3, 1886 - was found behind a baseboard, where it had been hiding for 135 years.

Credit: Erik Erhorn
This is a photo of the Spencer family, taken in 1923 - nearly 40 years after the letter got lost behind the baseboard. Medad Spencer died in 1919.

"When I bought the home in 2017, the lower-level interior of it had undergone some serious modernizing," said homeowner Erik Erhorn, 27. "We knew some of the upstairs rooms would eventually need work, so we decided to do that this spring."

Erik, who is the Crockery Township Supervisor, was joined by his brother Tyler when the demolition portion of the project started in March.

"We started by pulling the carpet up," Erik said. "After that, [Tyler] had a crowbar and I had a hammer and we just started going to town ripping the baseboard off."

In the heavy fog of dust and wood chunks they were creating, the two men saw something behind a part of the baseboard they'd just torn off.

"It was a letter still inside its original envelope," Erik said. "I remember thinking, 'Yea, it's cool, but it probably doesn't amount to anything.'

The letter, though creased and brittle, was still legible.

Credit: 13 ON YOUR SIDE
The letter, no doubt written with a fountain pen in 1886, is still very legible for having been lost behind a baseboard for 135 years.

Credit: 13 ON YOUR SIDE
The letter, no doubt written with a fountain pen in 1886, is still very legible for having been lost behind a baseboard for 135 years.

"It was written by a Charles V. Warren, who at the time was living in Hart, Michigan," said Erik. "He wrote it to the person who owned my home at the time - Medad Spencer."

The letter was about Mr. Warren wanting Mr. Spencer to sell his property in Nunica and then purchase his 160 acres in Oceana County.

"Charles V. Warren was really trying to sell Medad on his property," Erik said. "He's boasting about good tillage, streams running through it with tons of trout and good timber."

While feeling as though he had awakened a ghost, Erik wondered how the letter could have possibly ended up behind the baseboard.

"I flipped over the envelope and saw some fading scribbles written on the back," Erik explained. "They were lumber dimensions, leading me to believe somebody likely grabbed the letter, and like we do today, quickly scribbled down some notes."

Credit: 13 ON YOUR SIDE
Erik believes the envelope was used as scrap paper because on the back are scribbles of measurements.

Erik believes it very well could have been a similar renovation to his, and the person needed to write some measurements somewhere so they wouldn't forget.

Along with the letter, Erik also found a few other pieces of the past.

"I found a wooden dowel rod, a small leather belt, a map of Asia and Africa and an advertising pamphlet talking up a washboard," Erik said. "It was written in a way that's hideously politically incorrect compared to today's standards."

Credit: 13 ON YOUR SIDE
Along with the letter, Erik found more relics, including this advertisement pamphlet for a washboard, which was addressed to 'The lady of the house.'

Credit: 13 ON YOUR SIDE
Along with the letter, Erik found more relics, including this advertisement pamphlet for a washboard, which was addressed to 'The lady of the house.'

The pamphlet starts out saying, "Dear Madam. We conceive it to be your desire to lessen the labors of the kitchen and, of all days, wash day is the most trying and laborious."

"I'm sure nobody was offended by how this was written back in 1886," Erik joked.

What will Erik do with his newly-discovered relics? He says he's not sure yet.

"I'm not going to throw them away," he said. "I want to find a way to preserve them."

He says he does want to find out if Medad Spencer ever did sell his property to purchase Charles V. Warren's in Hart.

"If he never did purchase the property, was it because this letter got lost behind the baseboard and he never knew about it," Erik said. "This lost letter may have altered the course of history, and I'm a part of that history now." 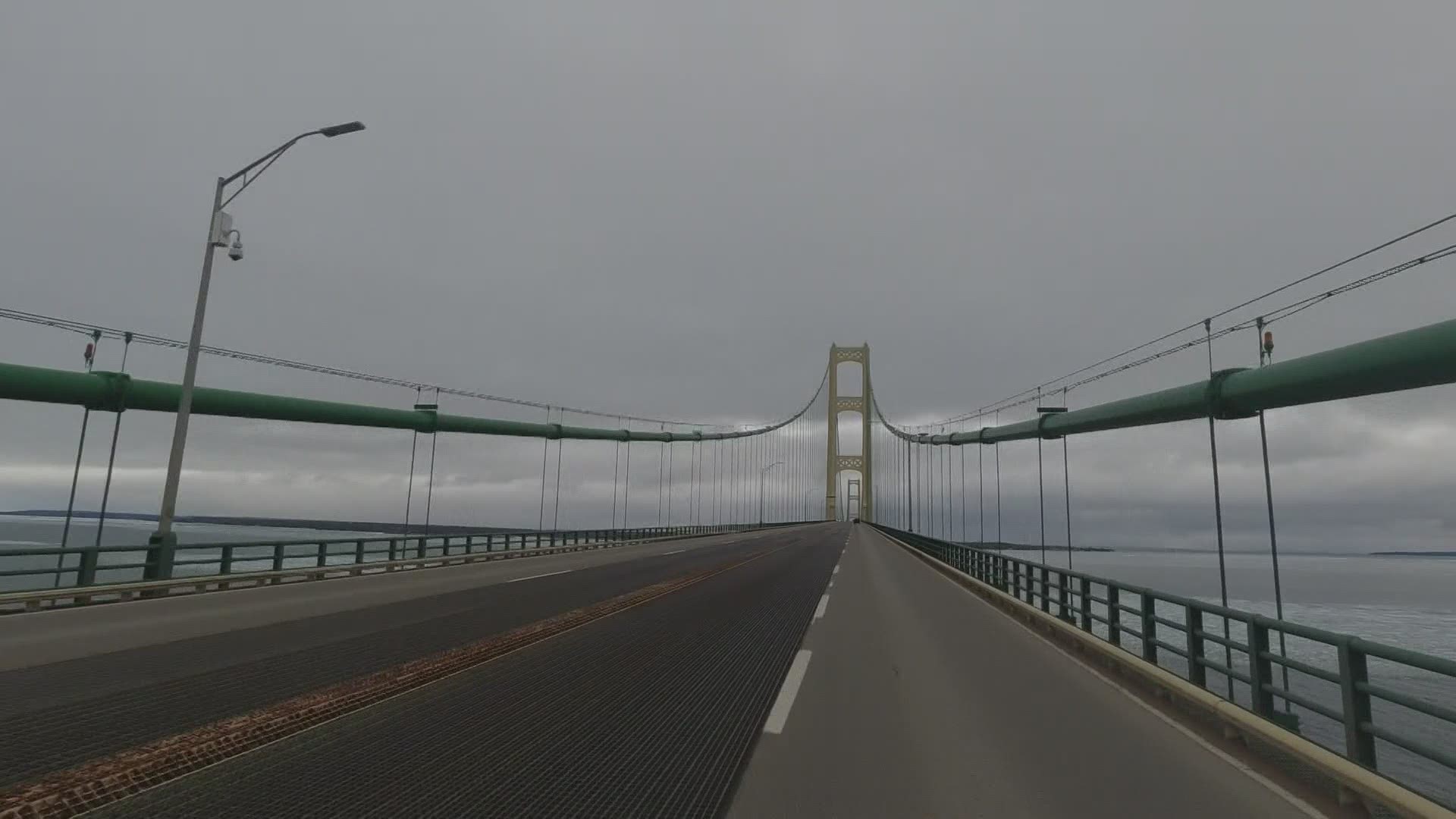