If you thought you'd seen the end of Atlanta's pink Trap House...think again! 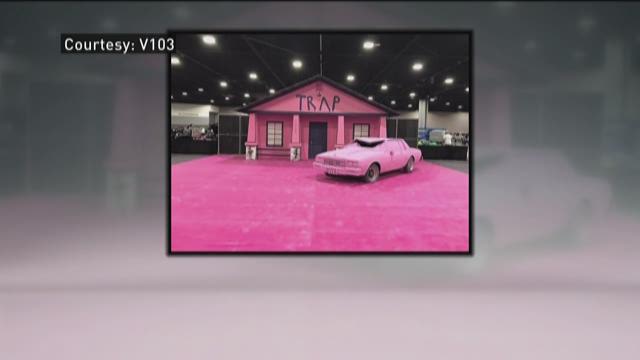 The actual Howell Mill home may be sporting a fresh new coat of white paint, but a replica has been set up in a new space at the V-103 Car and Bike Show.

PREVIOUS | The pink 'Trap House' is pink no more

Atlanta rapper 2 Chainz, the brains behind the original trap house meant to promote his new album "Pretty Girls Like Trap Music," is performing at the event at the Georgia World Congress Center.

Naturally, he decided to take the show home on the road. 2 Chainz posted about it on his Instagram, Friday.

A post shared by 2 Chainz Aka Tity Boi (@hairweavekiller) on

For days, 2 Chainz's pink Trap House drew people from all over Atlanta and the world to the spot to take pictures with the instantly-iconic landmark. The Atlanta rapper rented the home last month as part of a marketing campaing, but it quickly became more than that.

Over the weeks, the house was used as a site to host multiple community events, from a #TrapClinic for free HIV/AIDS testing to a #TrapChurch, where organizers came up with ways to build up their community.

The house got its fair share of complaints, too, as the increased foot traffic meant more congestion. And at one point, the bright pink car that was parked on the lot had to be towed away after it became a safety hazard from all the people jumping on it. (Although 2 Chainz's response to the car getting towed was pretty great.)

Hip-hop fans were sad to see the house painted over last Friday, but it seems as if they have another shot to see the trap house this Saturday.