School officers said four of the students arrested were over the age of 18, while the other three were juveniles. Cobb County School District spokesperson Donna Lowry said. 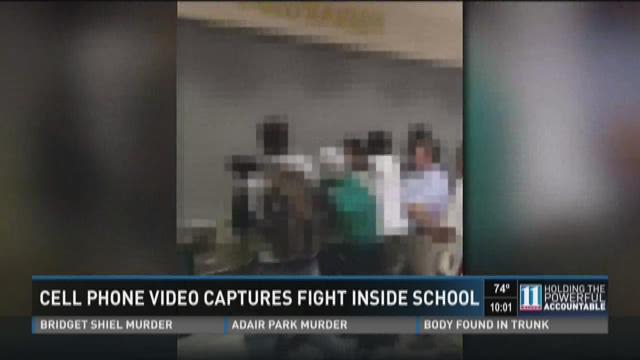 KENNESAW, Ga. -- Seven students were arrested after a fight erupted in the cafeteria at Kennesaw Mountain High School on Monday, officials said. A student caught it all on cell phone video.

Principal Mark Trachtenbroit said extra police would be on campus Tuesday as a precautionary measure.

Four of the students arrested were over the age of 18, while the other three were juveniles, Cobb County School District spokesperson Donna Lowry said.

"Kennesaw Mountain High School will always prosecute to the fullest extent of the law any activities which jeopardize student and/or staff safety," Trachtenbroit said in a statement posted on the school's website.

The principal adds that behavior like that will not be tolerated. Students we spoke to say they're surprised a fight like that would happen at their school.

"We have disagreements. We have arguments over things. I don't know how it started. I don't know what sparked it,” senior Austin Scott said.

Students also told 11Alive the fight happened at the beginning of school, which they said could have been in retaliation to another incident.

Scott believes there are better methods to handling disputes, besides violence.

"I don't think that's the best decision to make to solve a problem that you have with somebody," he said. "If you have a problem with someone, you should just talk it out.”

There's been no word yet on what led to the fight. 11Alive reached out to the school and police to see if there have been previous problems at the school, but there's been no response yet.