County commissioners may vote next week on a plan to reduce the size of the police force to spend more money on social programs. 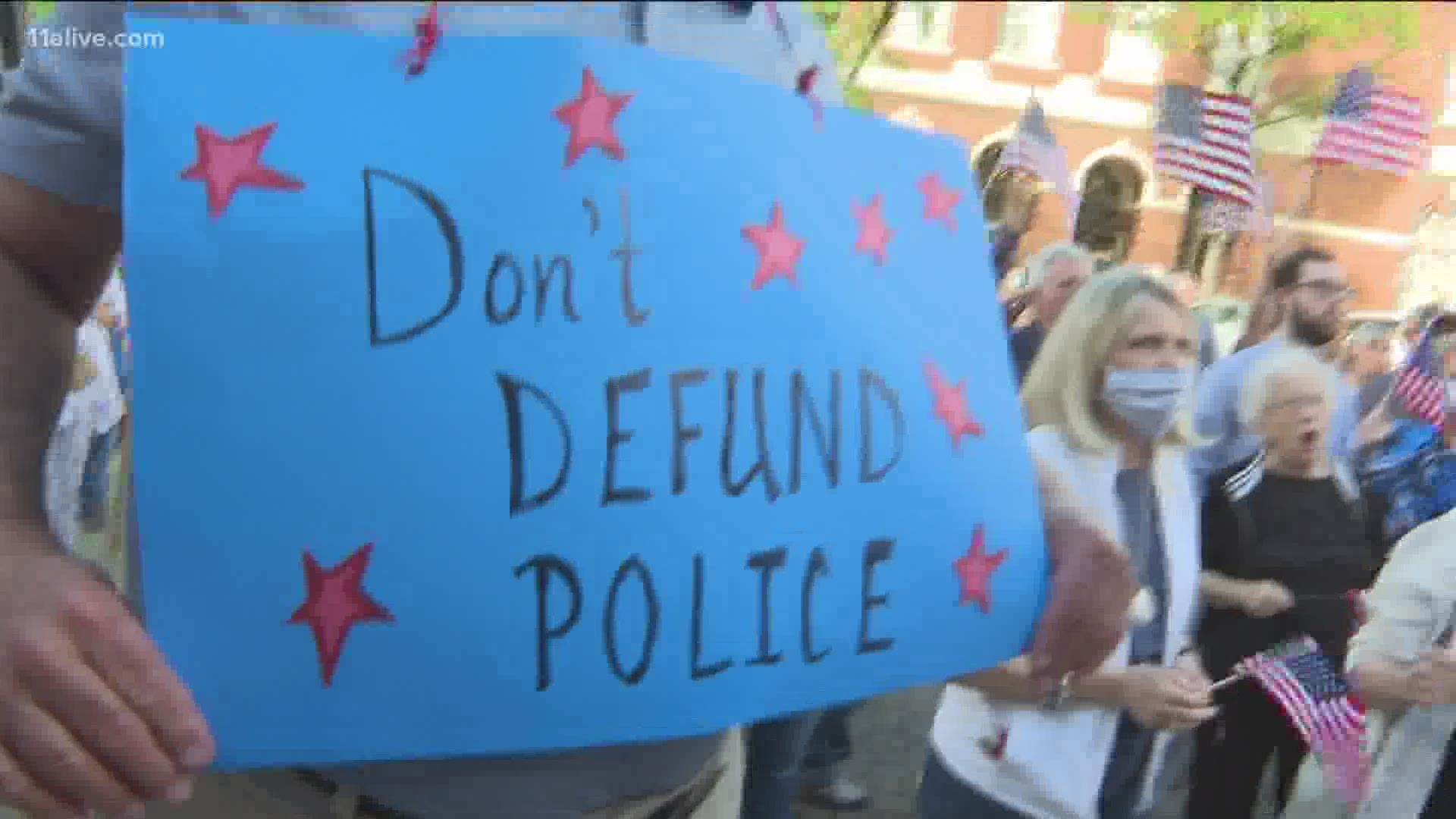 ATHENS, Ga. — Demonstrators in Georgia and across the country are demanding that cities start reducing police budgets in order to spend more money on social programs that could prevent crime.

They call it “defunding” police.

And that’s just what is on the table in Athens-Clarke County, with a vote possible next week.

Tuesday night, crowds had a lot to say to commissioners at a public hearing. Athens, home of UGA, is also home to some of the most progressive residents and politicians in the state.

But the people who showed up at City Hall were divided about the proposal to defund police.

There were two crowds waiting in line outside to speak to the commissioners inside. One group was for defunding police, the other was against it. Both crowds were loud and peaceful, holding impromptu, dueling rallies, waving hand-made signs, taking turns speaking over a bullhorn.

RELATED: Bottoms on defunding police: Matter of 'reallocating funds' which Atlanta is 'ahead of the curve' on

Inside, only four people at a time were allowed in the meeting, to address the commissioners who were on a screen, watching the public hearing remotely.

And a man against defunding thought the plan would make the community less safe, since it proposes a smaller police force.

“At 3:00 a.m., when somebody’s trying to get into my house, I’m not calling a mental health expert, I’m calling police,” he said, worried that there would not be enough officers to respond to all reports of crime.

The defunding proposal comes from Commissioner Mariah Parker, and one of her concerns is that last year Athens-Clarke County Police were involved in six shootings.

The Georgia Bureau of Investigation and the District Attorney ruled they were all self-defense and justified.

But Parker believes there’s a better way. She believes reducing the police force by 50 percent over the next ten years, and redirecting the savings to mental health and social services, would prevent crime, and reduce crime.

“If they’re going to reallocate the money,” said one supporter of defunding, “yes, they need to reallocate it into the community, and at the same time, to invest in better training for the police.”

One of the opponents of defunding thinks it will make it difficult for the department to hire the best.

“When you lower the funding you’re going to get the worst of the crop.”

They want to increase spending on a new, comprehensive, long-term, community-wide anti-racism initiative. That plan also calls for reforms in the police department, but without reducing the police budget.

A vote on how much funding Athens Clarke County police will receive over the next year is scheduled for next week.

The Carter Center: Rayshard Brooks' death emphasizes that the country must come to grips with systemic racism