The worker was said to be on top of an I-beam when it collapsed 10 stories through the interior of the structure, the fire department said. 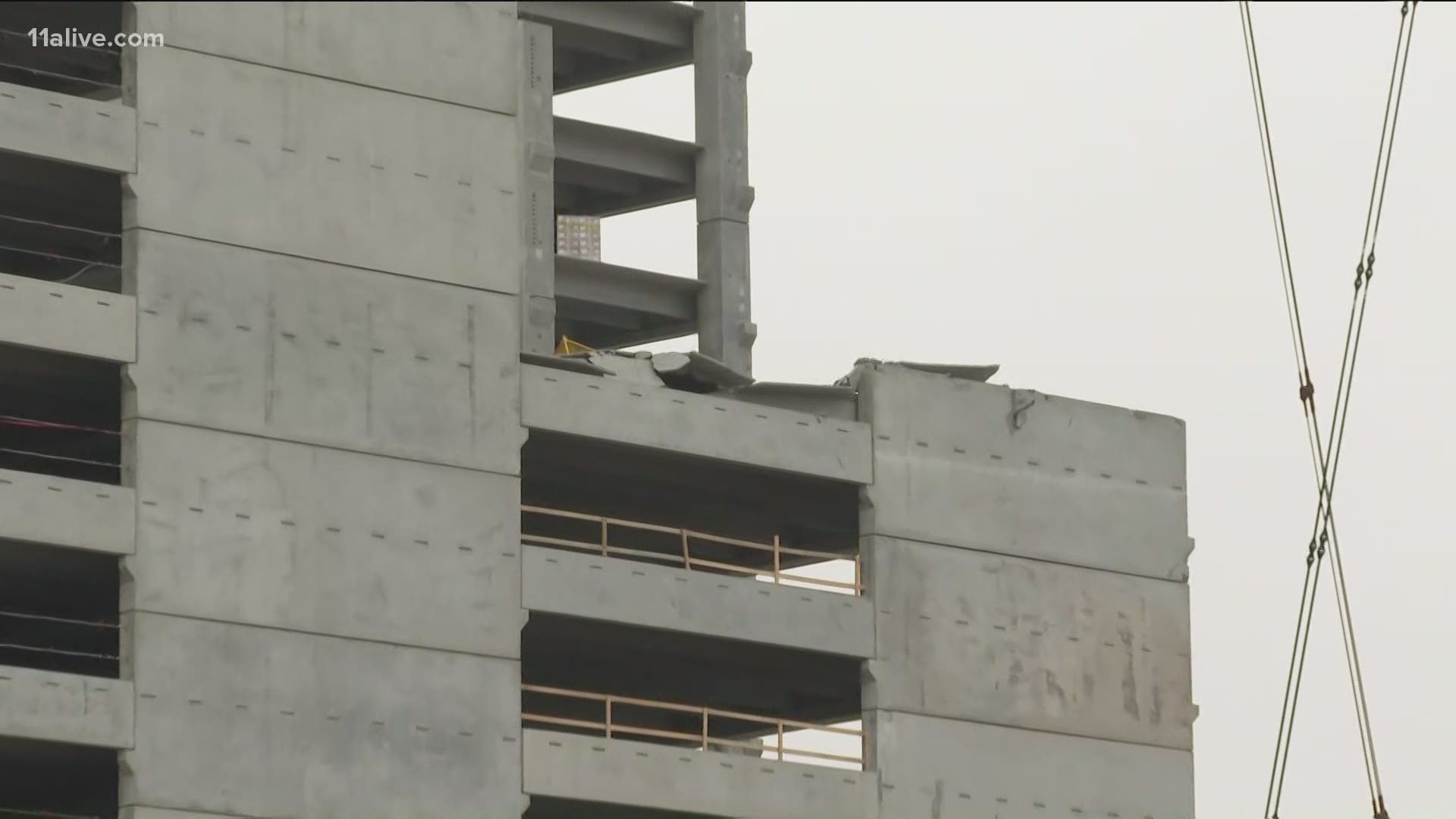 ATLANTA — Atlanta Fire said Saturday a worker at the site of the partially collapsed parking deck in Midtown was significantly injured when an I-beam he was working on top of collapsed through 10 stories of the interior of the structure.

At least one worker had to be rescued and four more were hurt on Friday when the initial partial collapse occurred.

Sgt. Cortez Stafford of the Atlanta Fire Department said the worker in Saturday's accident suffered "significant injuries to his lower extremities" in the collapse of the I-beam. He said a second beam had also possibly collapsed through the structure.

The city of Atlanta has now completely shut down the project. Streets around the structure, including Linden Ave., Spring St. and parts of W. Peachtree St. will be closed indefinitely.

The worker was transported to Grady Hospital.

RELATED: 1 worker rescued, others hurt after partial collapse of parking structure in Midtown

"Workers were inside shoring up the structure from a #collapse that took place yesterday," when this latest accident occurred, the fire department wrote.

11Alive's Maura Sirianni sent photos from the scene which indicated that the parts of the structure which had not been affected appeared to remain unaffected.

Atlanta Fire Search and Rescue Units extricated one worker with leg injuries after T-beam pancaked down multiple floors at 530 W. Peachtree Street. Workers were inside shoring up the structure from a #collapse that took place yesterday. #AFRD pic.twitter.com/kSL7DjbMOa

Atlanta Fire spokesman Cortez Stafford initially told 11Alive that multiple floors had "pancaked" and, when asked how many floors of the building collapsed, he replied: "All of them."

A witness nearby messaged 11Alive and said he saw a "big cloud of concrete dust" and then "running workers a few minutes later."

Atlanta Fire units have returned to 530 W Peachtree Street for a second major collapse of the parking deck that partially fell yesterday. Unknown if anyone inside #AFRD

On Friday Atlanta Fire Deputy Chief Glen Riley said subsequent collapses were a concern - especially outward, which could extend to the expressway below.

He said engineers with Baston-Cook, the operator of the construction site, were going to try and rig it to try to keep it from falling.

He had said they would likely have to close off streets - including parts of Spring Street - while that was being done until engineers, and later, City of Atlanta engineers, could ensure no further collapse. It's not immediately clear if those streets were ever closed.

At least one worker had to be rescued and others were hurt in the initial partial collapse of the parking structure, just before noon.

At least one trapped worker was freed from the debris, and taken to the hospital with a serious leg injury.

At least four other construction crew members were hurt, but were able to walk out of the building on their own. One firefighter was taken to the hospital for treatment for possible heat exhaustion.

The parking structure is located at the intersection of West Peachtree Street at Linden Avenue, near Emory University Midtown Hospital.

According to OSHA records, Baston-Cook Construction has been fined twice for different violations over the last five years, one involving the 2017 death of a worker at a construction site at Northside Hospital.

In a statement, the company's chief operating officer acknowledged the accident, writing that the workers injured were subcontractors for the company.

"At Baston-Cook Construction, safety is our top priority. We are committed to the safety of every employee and trade partner working at our job sites," Kevin Appleton said. "Our thoughts are with each of those injured and we would like to thank the first responders who assisted with this rescue operation."