“The true nature of the National Anthem for this country has been revealed. I don’t see what people are mad about,” Williams said. 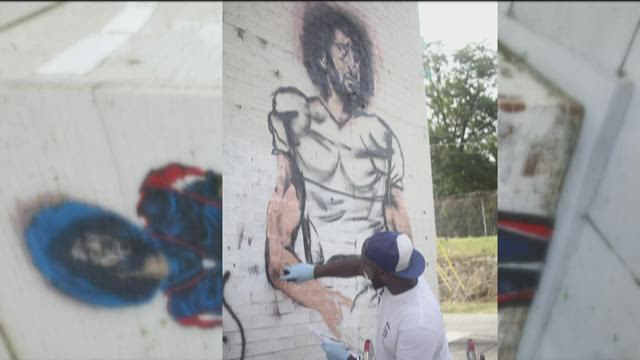 ATLANTA – A once plain, chipped white wall at the corner of Lowery and Fair streets is now at the center of the biggest trade deals for the National Football League this year. On Wednesday, Fabian Williams painted a mural of Collin Kaepernick wearing the No. 7, leaving fans speculating what’s next for the former San Francisco 49ers quarterback.

Williams believes Kaepernick is true to Atlanta’s civil rights leadership and would be the ideal Falcon. During a phone interview with 11Alive’s Ryan J. Dennis, the self-taught artist revealed what inspired his vision for the mural #KAEPTLANTA.

“My work is political. I create my work like a journalist but from an emotional stand point, and obviously, this is my feelings of the time. Kaepernick, to me, is like Muhammad Ali. He really put himself out there on the lines of his career. He stood for what he wanted. He refused to be in the Vietnam War and they took away his title, his license…His stand was historically a victory and I believe that is what Kaepernick is doing,”

The reason why Colin Kaepernick is still a free agent is the subject of discussion; he’s a 2011 second draft still in the progressive stages of his career. When in comparison to other African-American quarterbacks like Russell Wilson and Cam Newton, the 29-year-old Milwaukee native has been the topic of sideline blotter since August 2016, when he decided to not stand during the National Anthem.

“The true nature of the National Anthem for this country has been revealed," Williams said. "I don’t see what people are mad about.”

Kaepernick has become an advocate for civil rights, taking a stand on police brutality and racism.

The mural strikes Kaepernick as a Falcon wearing No. 7, which was former Falcons quarterback Michael Vick’s old number.

1 / 8
Fabian Williams painted a mural of Collin Kapernick wearing the No. 7, leaving fans speculating what’s next for the former San Francisco 49ers quarterback.

“The No. 7 jersey is Kaepernick's number from San Francisco, but for me it just so happens to be Vick’s old jersey. But the No. 7 to me means affinity and great things happen around the number,” Williams said. “I look at it more as a blessing. I don’t really extend it to Vick.”

“Maybe in other parts of the country there’s static with where he stands, but not here in Atlanta,” Williams said.