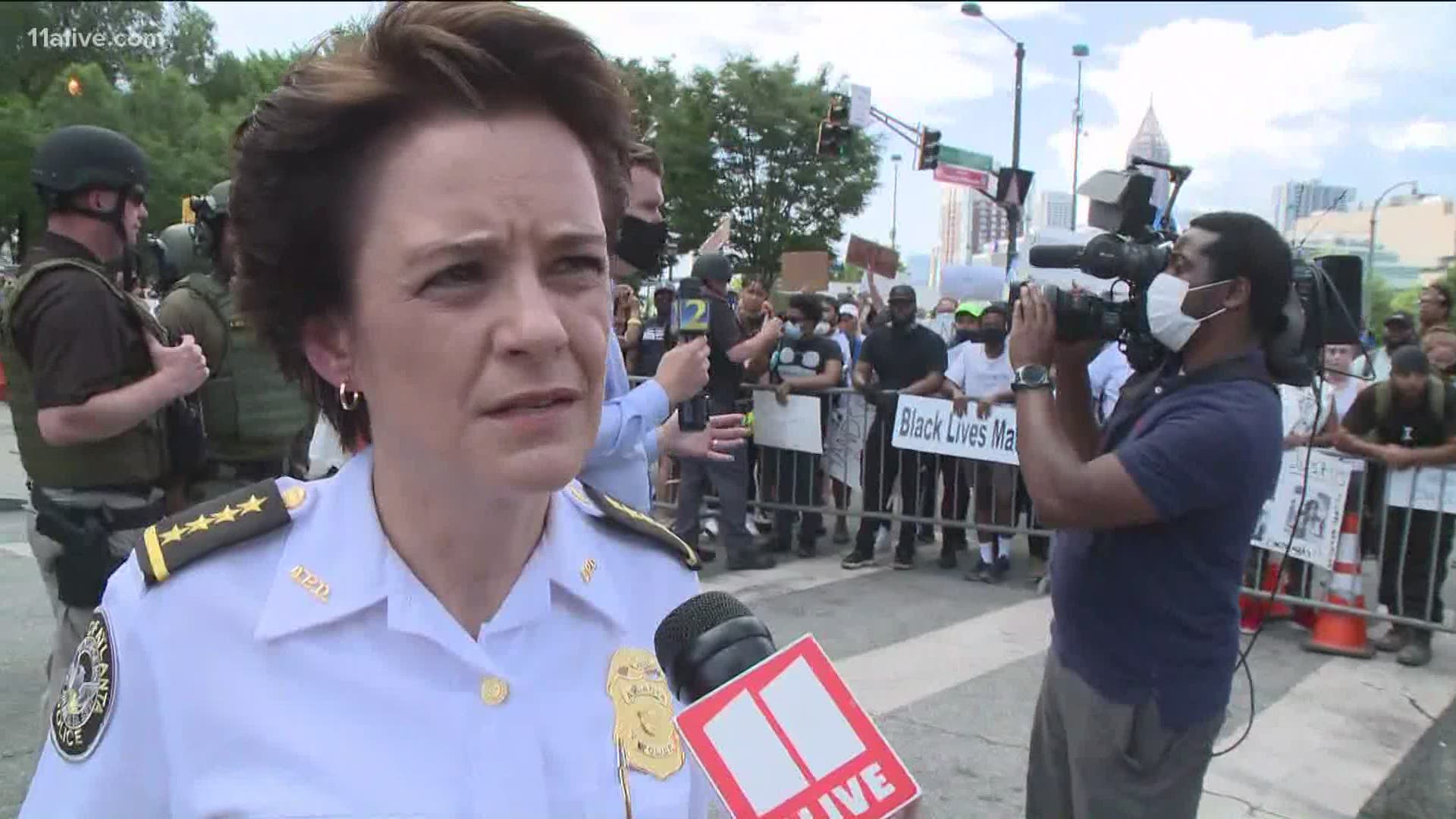 ATLANTA — The chief of the Atlanta Police Department is stepping down but remaining with the department hours after an officer-involved shooting in an Atlanta Wendy's parking lot.

Mayor Keisha Lance Bottoms made the announcement on Saturday afternoon that Chief Erika Shields has agreed to step down as the chief and take another role that is still "to be determined."

In one of them where two college students were tased and pulled from the car, two officers were fired within 24 hours of the incident. This move brought an angered response from the police union president who suggested their due process rights were violated. Since then, other officers involved in the incident were also terminated.

Another video circulating of an officer bodyslamming a protester who said she was in the process of leaving while moving a barricade. Critics have this incident, which led to the woman's collarbone being broken, as another example of police brutality.

However, Shields has also been out in the crowds at times during recent protests - at times meeting directly with protesters and speaking with them.

Shields was not at the podium with Bottoms during Saturday's announcement though the Mayor said this was the now-former chief's personal decision. Mayor Bottoms said that a search will soon begin for a replacement. However, in the interim, Rodney Bryant, who currently serves as the police department's corrections chief, will fill the role. Bryant has been with the department since 1989.

In the same press conference, Bottoms also called for the termination of the officer seen shooting 27-year-old Rayshard Brooks of Atlanta. Video appears to show Brooks running away but also turning toward officers with what appears to be an officer's taser, which he wrestled away moments earlier during a struggle.

Bottoms took issue with the officer's actions saying that she "firmly believes that there is a distinction between what you can do and what you should do."

She added that she doesn't believe that the shooting was a justified use of deadly force.

The shooting of Rayshard Brooks | What we know

GBI Director Vic Reynolds held a press conference Saturday afternoon which detailed elements of the investigation and the shooting.

Witnesses indicated that the man grabbed the Taser from the officer.

Reynolds said that surveillance video from Wendy's "very clearly" showed that Brooks was running away while carrying the Taser he had taken from one of the officers.

Brooks was transported to Grady Memorial Hospital and according to the GBI, he died during surgery at Grady.