Atlanta Police down 220 officers since start of January, department says

According to the department, it is about 400 short of its 'authorized strength' of 2,046 total officers. 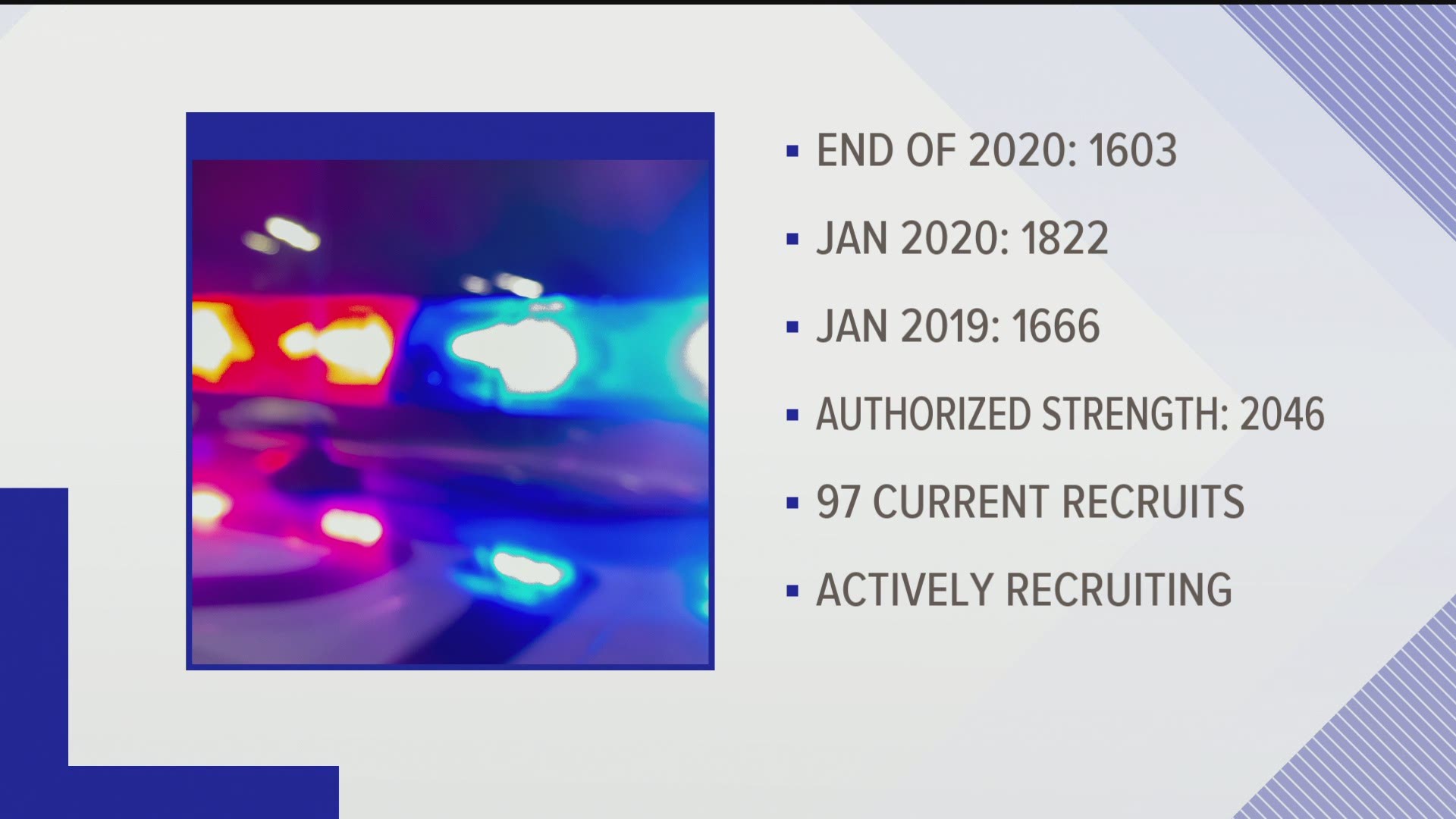 ATLANTA — The Atlanta Police Department says it is operating with fewer police officers now than it was at the start of the year.

According to the department, there are 1,603 officers currently on the force, about 400 short of its "authorized strength" of 2,046 total officers.

"We have been operating at less than full staffing for a while," according to Atlanta Police spokesman Steve Avery. "The numbers fluctuate as people come and go."

According to the department, the force had 1,666 sworn officers at the start of January 2019. That number increased significantly over a year, and by January 2020, the department said it was up to 1,822 officers.

While Atlanta Police couldn't point to one issue for the drop in the number of officers, Avery said the turnover is "not out of line with what we are seeing with numerous departments across the nation today, due to the current climate surrounding policing in United States."

"The reasons for the attrition are varied, we have some officers opting for retirement, some deciding to pursue other careers outside of policing entirely, as well as officers taking advantage of opportunities with other departments outside of Atlanta," he added.

Coronavirus pandemic aside, 2020 proved to be a tumultuous time for the Atlanta Police Department, primarily thanks to a summer of racial reckoning - sparked by the deaths of George Floyd and Breonna Taylor by police in Minneapolis and Louisville, respectively. Massive protests and demonstrations broke out nationwide, and here in Atlanta, in the aftermath.

But a string of other incidents followed those protests - including officers being fired in connection to the tasing of college students during a night of protesting, murder charges being brought against an Atlanta Police officer for the fatal shooting of Rayshard Brooks, and the resignation of former police chief Erika Shields.

It came to a head in June with rumors of a mass "walkout" by officers, which Atlanta Police said was inaccurate, later attributing the drop in officers over a period of several days to many calling out sick - a period of time dubbed the "blue flu."

But the turbulent summer was all punctuated by a violent Fourth of July weekend that left an 8-year-old girl dead and dozens more shot.

The result was a police force left with "low morale," with officers resigning at a "higher than normal" rate. Officials, including interim Atlanta Police Chief Rodney Bryant, later said that morale had "stabilized."

"I think we are on the mend of getting better, but there's still a way to go," Bryant said in a September interview.

According to Avery, the department is actively recruiting and seeing some improvements: it currently has just shy of 100 recruits in the academy, or waiting to attend.

However, recent vocal complaints from Buckhead and Edgewood community leaders over an uptick in crime, including several recent shootings at Lenox Square, have risen.

While Avery conceded that some lower-priority calls to police - like larcenies where the suspect has already left, private property accidents with no injuries, or minor damage to property - are "triaged," he said the department makes every effort to respond to all calls and believes it has enough resources to "effectively and efficiently protect and serve the City of Atlanta."