Police are looking into the circumstances surrounding an arrest last week that has gone viral over social media. 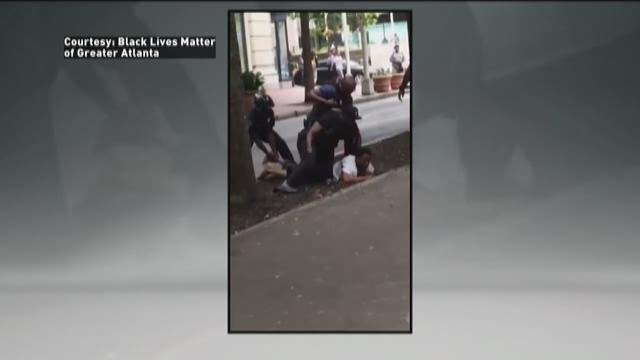 ATLANTA – One of the officers allegedly involved in a controversial arrest last week has been suspended for 20 days, officials confirm.

It's comes after Atlanta Police officer Quinton Green was captured on video hitting a man, Rickey Williams, in the face while trying to place Williams in handcuffs. The video of the arrest, filmed by someone affiliated with the Black Lives Matter of Greater Atlanta group, was posted to Facebook and subsequently went viral.

In a statement following the announcement of the Green's suspension, Atlanta Police Chief Erika Shields said she believed the "manner in which the incident unfolded was avoidable" because of the number of officers present. Her full statement read:

“Policing can be a difficult job, even under the best of circumstances. When an individual chooses to resist arrest, it can be even more difficult, unappealing and sometimes ugly.

The Atlanta Police Department is committed to policing in a fair and equitable manner. When incidents such as these are brought to our attention, we have an obligation to review whether the use of force was reasonable by taking numerous factors into consideration.

In this case, I believe the manner in which the incident unfolded was avoidable, as the officer was not alone and had appropriate backup, allowing him to take a different approach to the arrest. That being said, having served as a street-level cop, I know from experience that mistakes are made when split second decisions are made.

The officer has accepted responsibility for his actions, and will receive a 20-day suspension. Further, the department will examine the practices of the unit as a whole, and ensure that adequate supervision is in place. Additional training will be required of all officers assigned to the zones who work in a plain clothes capacity to ensure that we are operating in a defensible space.”

The 16-second video in question shows four Atlanta police officers and one suspect pinned to the pavement. The arrest from Thursday, June 22 allegedly happened at the corner of Broad and Alabama streets.

The video doesn’t provide any context about what led to the arrest, or what the suspect is accused of, but many on social media say those details don’t matter, just the action of the officer in the moment.

“Police officers have a legal right to use force to make an arrest if the arrest is lawful,” said veteran criminal defense attorney Page Pate. “But they can only use so much force as is required to make an arrest. Anything additional - punches to the face like we saw that in that video - may be excessive if it's not absolutely necessary to arrest the person."

“They had the guy on the ground,” Pate said. “He may not have completely been complying with all of their requests, but they had him completely under control. He posed a danger to no one.

“From what I saw in the video, the officer was acting with excessive force.”

Pate also said the suspect did not appear to be resisting arrest.

Attorney Bill McKenney was a police officer for 10 years.

“If you look closely the suspect already has a handcuff on, and already broken away from one of the officers who has pinned him down,” McKenney said. “You know there is a handcuff on him; you know he is resisting what I consider is reasonable force to make him comply."

“Once the suspect became active, that officer was allowed to use reasonable force,” McKenney said. “He did not club him; he did not kick him. He used what is taught in the academy, which is a closed slap, to get compliance.
“It’s a form of pain compliance and I didn't see unreasonable force.”

"Following the conclusion of the internal investigation, Chief Erika Shields will review the evidence therein to determine the appropriate disciplinary action, if any," police said in a statement. That discipline came in the form of the 20-day suspension.