We'll be providing live updates through the evening. 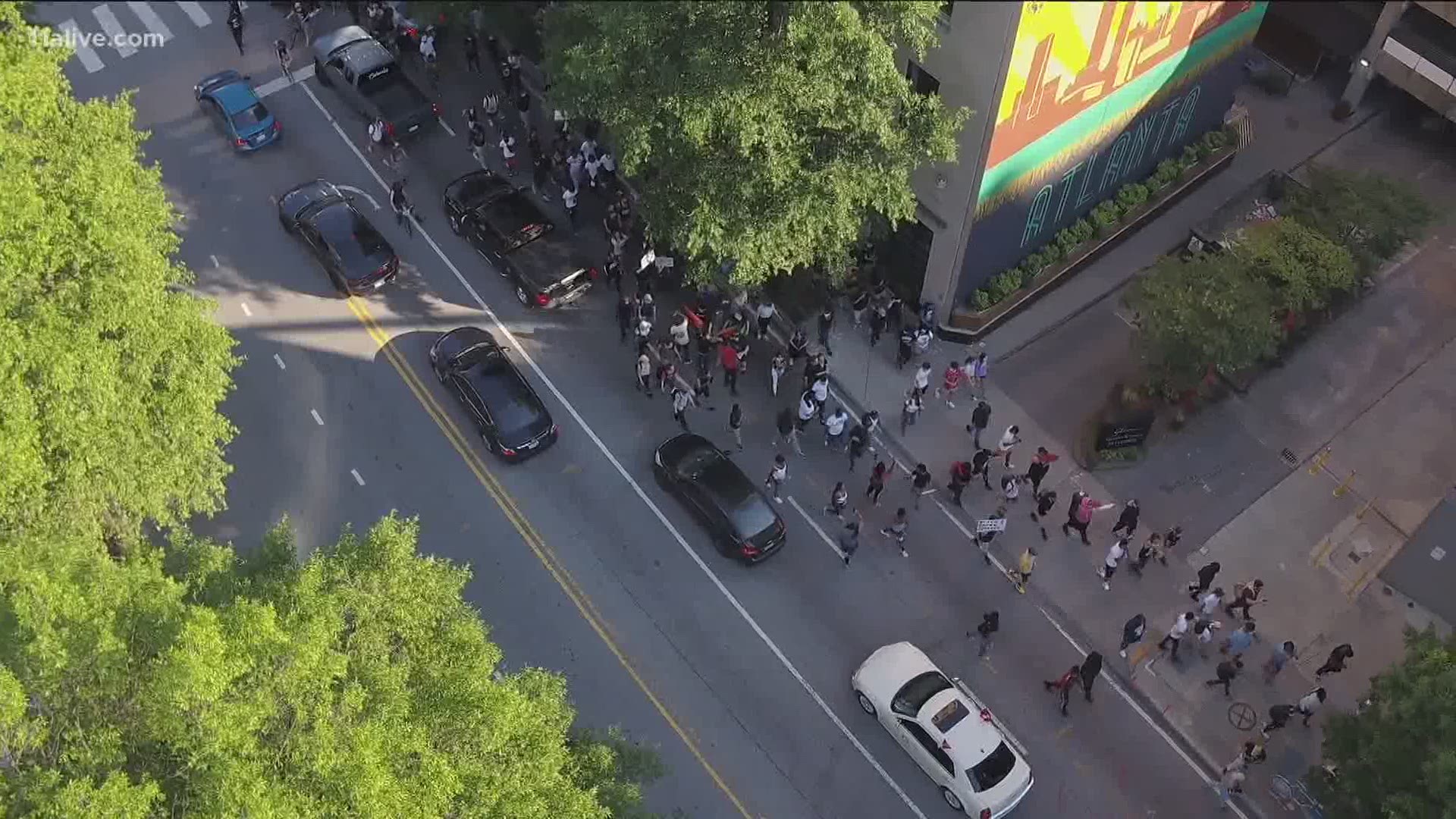 ATLANTA — Atlanta has seen a largely more peaceful second night of protests after demonstrators clashed with police last night amidst mushrooming unrest around the country.

Protest actions sprouted from Sugarloaf Mills Mall in Gwinnett County to Atlanta's historic Sweet Auburn neighborhood, where NBA star Jaylen Brown led a march, to outside the governor's mansion and again at Centennial Olympic Park and the CNN Center.

Mayor Keisha Lance Bottoms instituted a 9 p.m. curfew, which the Jaylen Brown-led march and governor's mansion group appeared to observe, dispersing peacefully ahead of its arrival. Others remained and were dispersed.

11Alive will be monitoring developments throughout the evening and providing updates as they come in:

1:50 a.m.: As of 1:30 a.m, Atlanta police said that 70 people had been arrested in the protests Saturday afternoon and early Sunday.

11:29 p.m.: Governor Kemp has signed an order authorizing the activation of up to 3,000 National Guard troops statewide due to several planned protests on Sunday. Kemp has also extended the State of Emergency until the end of next weekend.

11:09 p.m.: Police said they saw a "significant decrease" in the number of pedestrians and protesters on the streets leading up to the night's curfew at 9 p.m. However, they said there are still a large number of protesters - particularly in the area of Marietta Street and Andrew Young International Boulevard. The update said officers are still seeing damage to property including one patrol vehicle and the window of the department's Zone 5 precinct on Ted Turner Boulevard. The Dunkin Donuts on Luckie Street and Forsyth Street and other Downtown businesses were also vandalized. Officers are also continuing to receive a barrage of items thrown at them. Police also suggest some protesters, tonight, are reportedly armed. As of 10:50 p.m., there have been 51 arrests.

10:25 p.m.: 11Alive is near the scene where an ATV appears to have been in an accident with an Atlanta officer. We're working to gather more information. Video shows the ATV heading up the road moments before the accident. Video shows the same ATV come back the other way. 11Alive's Ryan Kruger reports that the officer was trying to flag the rider down when he was struck. A short time later, several other officers filled the area along with members of the national guard. The location is now being

9:58 p.m.: The Gwinnett County Police Department reports that earlier protests outside the Sugarloaf Mills mall have ended peacefully. Police said that the group of peaceful protesters began to gather at the mall around 4:30 p.m. The mall chose to close as a protective measure. Police said that a majority of the protesters remained peaceful but four were arrested.

9:42 p.m.: Police continue to deploy smoke bombs and make arrests as they try to disperse this last group.

On 5-30-2020, at around 1:00 PM, we began observing several small groups of protestors in several parts of the city. Initially, the protestors were peaceful and there were few issues needing to be addressed. At around 6:45 PM, we began experiencing protestors breaking out windows of a building near Ted Turner Drive and Williams Street. Protestors also began throwing rocks, bottles, fireworks and other items at officers in the area of Cone Street and Marietta Street. As of 8:00 PM, we had made 34 arrests, mainly along the Marietta Street corridor, with at least one of the arrestees being armed at the time of arrest. We have also received reports of multiple other protestors being armed.

We continue working to keep the city safe and are beginning to enforce the 9:00 PM curfew that is now in effect. We will provide additional details as they become available.

9:35 p.m.: Officers are now advancing to clear the parking lot, where the last group of protesters had retreated to. The protesters are sending back fireworks and moving back.

9:34 p.m.: Officers have begun firing gas into the crowd.

9:30 p.m.: Kind of a tense waiting game setting in between the line of officers and the last holdouts of the downtown protest, who right now are gathered in a parking lot along Centennial Olympic Park on Andrew Young International Blvd.

9:27 p.m.: 11Alive's Ryan Kruger reports there appears to be one last group of protesters gathered at Andrew Young International Blvd. downtown. Aerial images show there might be a few dozen of them, with some fireworks going off.

9:20 p.m.: 11Alive's Hope Ford reports police appear to be continuing to deploy tear gas as they advance the line.

9:15 p.m.: A public safety alert went out to phones in Atlanta a moment ago notifying the public of the curfew.

9:12 p.m.: Officers appear to be slowly advancing a line down Centennial Olympic Park Dr. with protesters generally retreating and setting off some fireworks.

9:05 p.m.: With darkness falling, there does not appear to be a significant confrontation as of yet between the last group of protesters that were gathered around Centennial Olympic Park and police who are beginning to enforce the curfew.

9 p.m.: The mayor's citywide curfew is now in effect.

8:55 p.m.: 11Alive's Andy Pierrotti reports officers began telling the crowd they had 10 minutes to leave ahead of the curfew about five minutes ago.

8:55 p.m.: Live visuals from the Centennial Olympic Park protest site appear to show that tear gas has been deployed.

8:53 p.m.: We're closely watching what will happen in seven minutes with the last large group of protesters, downtown at Centennial Olympic Park, as they face off with officers.

8:50 p.m.: With the Jaylen Brown-led march and the governor's mansion protest both appearing to have peacefully ended, the last group of demonstrators we're aware of is the large crowd at Centennial Olympic Park/CNN Center.

8:47 p.m.: Jon Shirek reports the protest outside the governor's mansion has come to a peaceful conclusion.

8:42 p.m.: Gwinnett County Police indicate the protest group there, which was at Sugarloaf Mills mall earlier, attempted or are attempting to get on the interstate.

8:35 p.m.: The mayor's 9 p.m. curfew is about 25 minutes away. It's not yet clear what length law enforcement will go to in order to enforce it. Live visuals show heavy police and National Guard presence at the Centennial Olympic Park/CNN Center location.

8:30 p.m.: 11Alive's Jon Shirek reports the State Patrol appears as if it will soon try to disperse the protest group outside the governor's mansion.

8:25 p.m.: MARTA will soon shut off all public transportation services in accordance with the mayor's 9 p.m. curfew.

8:15 p.m.: Outside the governor's mansion, where a group have blocked the road, Muslim members of the group are conducting the sunset Maghrib prayer.

8:10 p.m.: The Jaylen Brown-led group has returned to the Martin Luther King, Jr. memorial site, next to Ebenezer Baptist Church in the Sweet Auburn neighborhood.

7:55 p.m.: Rep. John Lewis has issued this statement saying "I know your pain, your rage, your sense of despair and hopelessness" but that "rioting, looting, and burning is not the way."

7:47 p.m.: A large crowd in the dozens is now kneeling in the middle of the street outside the governor's mansion.

7:30 p.m.: Jaylen Brown continues to lead marchers through downtown Atlanta in what has been a peaceful demonstration.

7:02 p.m.: 11Alive reporter Ryan Kruger, who is at Centennial Olympic Park, estimates the current crowd is in the hundreds, down from the thousands that were gathered last night.

7:00 p.m.: To recap, in the city of Atlanta right now we're aware of one crowd gathered at Centennial Olympic Park and the CNN Center, one group of demonstrators that started marching behind NBA star Jaylen Brown from the Martin Luther King, Jr. memorial site in Sweet Auburn a short moment ago, and one group of protesters outside the governor's mansion.

6:52 p.m.: A few dozen demonstrators have now left the Martin Luther King, Jr. memorial site and are marching in the direction of downtown.

6:50 p.m.: Jaylen Brown, the NBA star from Marietta, says he drove down here from Boston overnight to organize the protest currently forming at the Martin Luther King, Jr. memorial site.

6:45 p.m.: In East Point, 11Alive's Nick Sturdivant spoke to the men outside the Target about their motivations. It's not about protecting the store, they said.

6:30 p.m.: Georgia National Guard troops are positioned in front of the governor's mansion.

6:25 p.m.: The mayor asks that you "find yourselves in a safe place in your home this evening" and "please know where your children are this evening."

6:20 p.m.: Mayor Bottoms is conducting a news conference after instituting a 9 p.m. curfew for tonight.

“What we saw in Atlanta last night and what we are seeing in cities across America is an explosion and what should not be lost in that explosion is what this anger and frustration is about for some many across America," she says.

6:15 p.m.: A group is outside the Camp Creek Target, in an apparent show to deter any looting or vandalizing of the store.

6:05 p.m.: Mayor Keisha Lance Bottoms has instituted a 9 p.m. curfew in the city of Atlanta tonight, according to a City of Atlanta tweet. It ends at sunrise tomorrow.

6:00 p.m.: Some protesters are gathering at the governor's mansion in Atlanta.

MORE ON THE UNREST IN ATLANTA