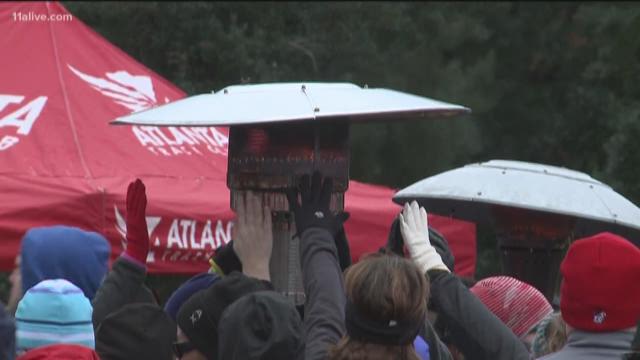 Atlantans ran for a cause as they put foot to pavement in the Atlanta Track Club's Annual Resolution Run – even if that pavement was cold. Very cold.

“I think we should give a prize away to whoever is wearing the most layers,” said Atlanta Track Club Marketing Director Jay Holder.

Still, Holder said the club prepared for the chilly temperatures.

“We brought out heaters, hot coffee at the finish line, (we're) selling extra layers at our merchandise tent,” he said.

But there were no heaters or merchandise tents out at Lake Lanier for the 20th Annual Polar Bear Plunge. Forty-two people signed up. This is George Wangemann's 18th year in a row. He recalled the first time he took the plunge.

“It was a shock to my system,” Wangemann said. “But after the second or third year, I started becoming used to that.”

“It felt like an ice cube,” Hughes said. He's following in the footsteps of his dad and grandfather.

In what organizers consider the coldest plunge in the fundraiser's history, it was also the shortest.

Resolution Run organizers said the numbers aren't in yet. But they had a lot of folks sign up at the last-minute, despite the weather.

As for the plunge, Little James, who also was the youngest swimmer at the New Year's Event, told 11Alive's Deborah Tuff, he'd do it again – in the summer.