More vigils and marches are expected throughout Atlanta on Sunday evening, as the nation continues reeling from Saturday’s deadly protest in Charlottesville, Va. 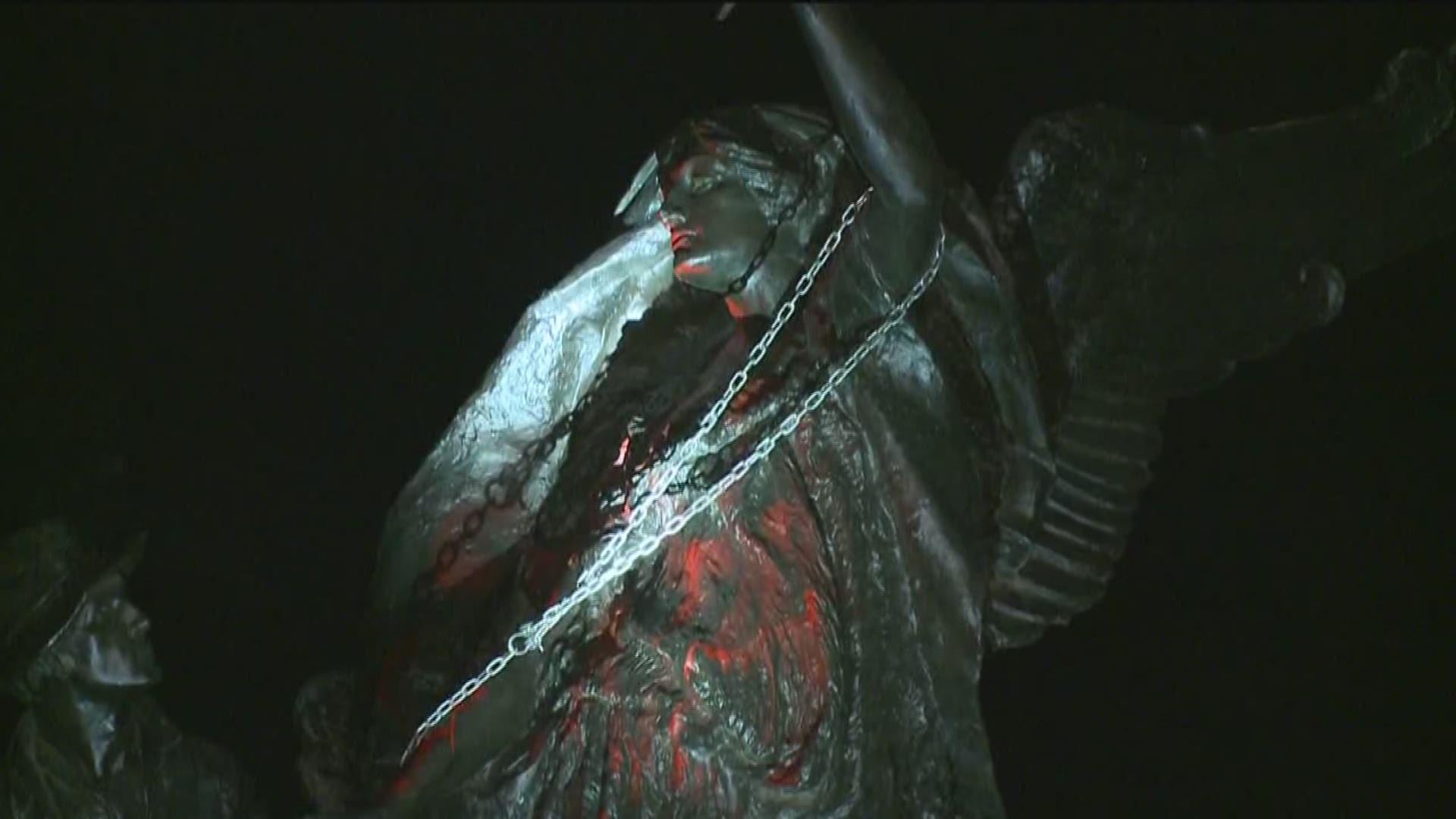 Atlanta's historic Peace Monument in Piedmont Park was defaced Sunday night at the end of a long march that organized to protest violence in Charlottesville, Va.

The protest began in downtown's Woodruff Park and stretched over a couple of hours into midtown. Atlanta police cleared the way for them to march peacefully.

But when the march reached the statue in Piedmont Park, several demonstrators climbed onto the monument and defaced it with red spray paint. A chain was also thrown around the monument, as several protestors chanted, "Tear it down. Tear it down."

But many in the crowd dispersed while the statue was being defaced, apparently wanting no part of any property destruction.

Some protesters argued the monument is a symbol of the confederacy.

The statue was commissioned in 1911 to symbolize efforts of reconciliation between the North and South after the Civil War. According to the state of Georgia, the monument was funded by the Old Guard Battalion of the Gate City Guard, which traces it heritage to 1854 when a group of private citizens formed a private militia to help the city keep law and order.

Then, Atlanta Police Maj. Timothy Peek stood silently in front of the monument, sending a subtle message that police would let the crowd protest but would not allow property damage.

Atlanta Police released a statement Monday afternoon regarding the incident:

By the time Atlanta Police arrived in Piedmont Park, marchers had already defaced the statue and placed a chain around it an apparent attempt to pull it down. Major Tim Peek, acting as the Night Commander on Sunday evening, arrived on scene. Demonstrators released their hold on the chain and Major Peek spoke to the crowd and persuaded them to do no further damage to the statue. Police were not able to identify anyone who did damage to the statue. The department welcomes any information or evidence that could lead to an arrest. Potential charges would include criminal trespass, criminal damage to property or destruction of property.

As for cleaning up and repairing the monument, the Mayor's Office of Cultural Affairs said they would be conducting an assessment of the condition of the bronze. They said the paint should be removed by next week, but it would take longer, months even, to fully restore the piece to "pristine condition."

Sunday night was the second consecutive night of protests in Atlanta over the violence from Saturday's deadly violence in Virginia.

The Georgia Alliance for Social Justice also held a candlelight vigil at 7 pm on the Decatur square.

Three people were killed and 35 injured during a white supremacist rally in the Virginia college town.

Early in the day, clashes had broken out as the groups that planned the "Unite the Right" rally were met with counter protesters. After the rally, a car plowed into a crowd, killing one person and injuring 19. Later, a state police helicopter that was monitoring the protests crashed outside the city.

RELATED | What we know about Charlottesville

The driver, James Alex Fields, Jr., 20, has been charged in the incident. At his first appearance on Monday morning, he was denied bond.