The Buckhead Debate | Is cityhood a viable solution to fight crime?

11Alive looks at both sides of the debate, plus crime data from other newly formed cities 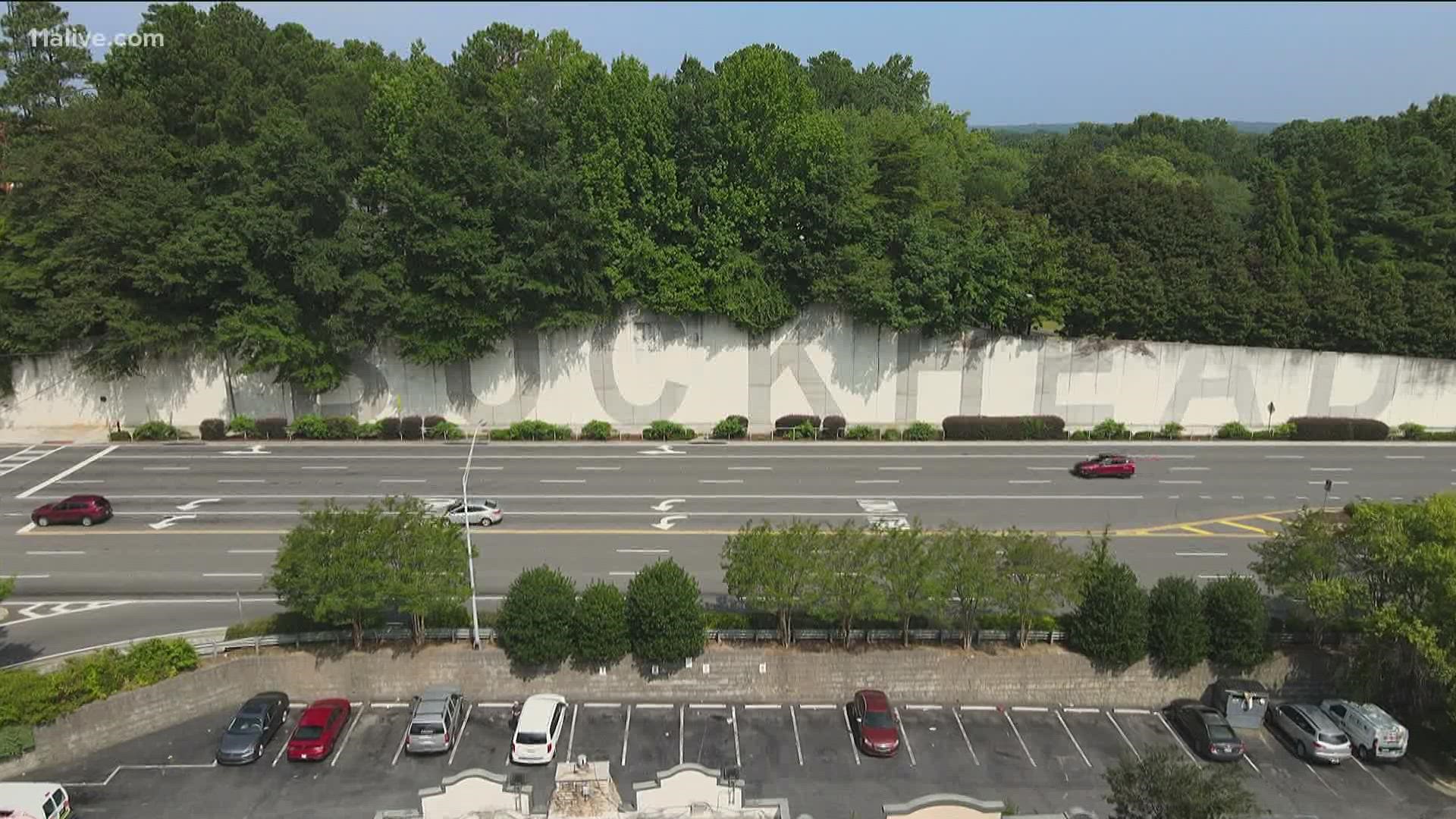 BUCKHEAD, Ga. — It was last July when Kasi Santarelli sought to escape pandemic lockdown in New York City, hoping for a new start in Buckhead.

However after moving, she soon found herself facing another sort of confinement.

“Everyone told me Buckhead was great, and it was the place to move in Atlanta,” Santarelli told 11Alive News.

“Slowly, the crime started to get really bad. There've been times the street has been barricaded because of shootings,” she added. “I can’t get into my apartment. I can’t get home.”

Santarelli is now planning her next move, no longer feeling safe to even walk her dogs outside her apartment at night. She said she doesn’t know yet where she will go, only that she has no plans to stay in Buckhead.

Concerns of crime also driving others, like Theresa Burns, to leave the area. Burns, who has lived in Buckhead for two years, said she plans to move as soon her family’s lease expires.

“Even walking to the MARTA station, I’m worried. I’m looking around and hoping the cameras are there and hoping someone would come to my rescue if something would happen,” Burns said.

“It's unnerving. It's scary,” she added. “It’s definitely not the Buckhead I remember when I moved to Atlanta 17 years ago.”

Burns and Santarelli both live near Lenox Square, the area the high-profile focal point for the flow of crime now targeting Buckhead. Both echo the community call that something in Buckhead needs to change.

“I think that certainly the dollars are being funneled from this community and how that's impacting Atlanta is enough reason for Buckhead to have a voice here and possibly figure out something different,” Burns said. “Obviously, what's been happening isn't working...right?”

"WE'VE FILED FOR DIVORCE. IT'S FINAL."

It’s such views that have propelled residents behind the Buckhead City Committee (formerly the Buckhead Exploratory group) to move to separate from the city of Atlanta and form their own city.

“We're trying to save Buckhead right now because Atlanta is not interested in doing that,” Bill White, CEO and chairman of the Buckhead City Committee, explained to 11Alive.

It’s a lack of city leadership and police resources, according to White, coupled with a surge in crime, that are leading the Buckhead City Committee to pursue cityhood.

“One of the reasons we believe that crime is very high in Buckhead,” White said, “There is a lack of love and appreciation for our police. The Atlanta Police Department is completely demoralized.”

White said Atlanta officers would be “welcomed” in a Buckhead city, which would seek to bolster its own police force, tackling crime through increased officer presence.

“The minimum at a time would be 250 police officers,” White said of the committee’s plan, which can be found further detailed online. “So you're going to see a police officer at every major place.”

“There will be a presence, and I will tell you this,” White added, “A presence is a deterrent for sure.”

11Alive reached out to the Atlanta Police Department regarding number of total and patrolling officers in Zone 2. A spokesperson said specifics on the number of officers working at a given time could not be shared for security reasons but confirmed to 11Alive 83 officers are assigned Zone 2. Yet, the total number of APD employees for the area is 111, which factors in other ranked members.

"The numbers we have seen pushed, exclude any police employee outside the rank of Officer. While APD officers are the backbone of this department and largely responsible for the day to day response to 911 calls and patrol duties, other ranks are heavily involved in this as well. Excluding them provides an inaccurate depiction of our actual strength. Additionally, the numbers typically fail to take into account our additional resources," the spokesperson said (for reference, zone 1, 2, 3, 4, and 6 all have comparable numbers of assigned APD employees, according to numbers provided by the department, while Zone 5 is the exception with 166 assigned).

Related: Here's what you think should be done to decrease violent crime in Atlanta | 11Alive Poll

As the Buckhead City Committee pushes forward, others have publicly pushed back. Groups like Committee for a United Atlanta argue it would be a lengthy and complicated process for Buckhead to create its own city.

"Buckhead is an important part of the City of Atlanta, always has been and will continue to be such," Mayor Bottoms said at the time, adding she doesn't believe the creation of a new city will solve the problem of crime.

Atlanta criminologist Volkan Topalli, a professor at Georgia State University, is also among those who believe creating a city for crime’s sake is a flawed strategy. Topalli has studied crime in Atlanta for 20 years. Recently, he became a crime victim himself.

“CRIMINOLOGISTS HAVE KNOWN FOR THE LAST TWO OR THREE YEARS THAT SOMETHING WAS GOING TO HAPPEN."

“I was one of the three people that was shot at the Home Depot parking lot a couple months ago, and it was truly the wrong place at the wrong time,” Topalli told 11Alive of the May shooting, where three people including Topalli, were injured.

But getting shot hasn’t swayed Topalli’s stance when it comes to analyzing crime and possible solutions. His references to his personal experience are matter-of-fact, with Topalli largely pointing to the data.

“It's ironic given what I do…but I don't fear for my life,” he said. “I understand that it was pretty much the chances of being hit by lightning bolt.” Meanwhile, the current crime wave is a trend Topalli said criminologists predicted.

“We have increases in homicide, assault and some other offenses,” he explained. “That's not unique to Atlanta.”

While he acknowledges it’s disturbing to see a spike, he said numbers are still at lower levels than five or ten years ago. Such perspective, he said, is important to keep in mind within the broader picture.

Crime control is difficult, Topalli added, when you have a lot of unpredictable factors.

“We had the Black Lives Matter/police accountability movement. Plus, we've had the pandemic and the end of social distancing coming together. Those are two things we've never dealt with before, much less at the same time,” he said, adding that warm summer weather and the availability of guns also play a role.

“Criminologists have known for the last two or three years that something was going to happen from that,” he explained.

While Topalli anticipates crime could drop in the fall, there’s no sign the Buckhead City Committee plans to wait. The group's efforts indicate a push forward, despite a looming mayoral race, where crime and potential solutions have already become subject of debate.

“We're not waiting around for the mayoral election,” White explained when asked about the timeline for creating a new city. “We've filed for divorce. It's final.”

White is enthusiastic, but the Buckhead City Committee must still pass legislative hurdles before proceeding to a potential referendum vote in 2022. Right now, a feasibility study is underway that White said is focused on studying police, zoning, infrastructure as well as parks.

While White didn't share a date for the study's release, plans online offer more of the Buckhead city vision. The committee cites their neighbors of Sandy Springs and Brookhaven as examples of communities successfully controlling their own tax dollars. Both cities also control their own police departments.

For those who live and work in the area, it’s hard not to compare.

“It has been tough with Buckhead down the street, but definitely we try to keep it in perspective with what's being blown out of proportion and what's really happening,” Vitri said.

When adjusted for population per 100,000 people, the data shows violent crimes increased in Sandy Springs after cityhood in 2007.

Brookhaven faced a similar situation after 2013.

11Alive reached out to both Brookhaven and Sandy Springs police for their response to the data. According to Brookhaven police, part of the “perceived increase” in overall crime can be attributed in part to a better reporting system. The NIBRS system, spokesperson Lt. David Sniveley explained, records “specific details of each criminal event,” which could mean multiple crime categories recorded within a single event, which could potentially influence numbers.

“This is not an increase in crime; it is an accurate account of the specific details of each criminal event,” he said.

But Snively also acknowledged Brookhaven has worked to “to address the alarming increase in crime and victimization of those in our community,” adding the recent uptick parallels the closure of courts during the pandemic and other coronavirus-related decisions which could influence recidivism rates, like the release of certain offenders from jails.

Reducing crime takes a “holistic effort” by all parts of the criminal justice system, he added, a point shared by other experts.

"SO MANY THINGS ACCOUNT FOR WHY YOU HAVE CRIME."

Ultimately, whether cityhood is a viable solution for curbing crime remains up for debate. Cityhood expert Michael Leo Owens, an associate professor of political science at Emory University, shared further insight on why correlation can be difficult to attain.

“Many of the new cities that have been created, crime wasn’t the issue that was animating their creation,” Owens explained, adding that metro Atlanta is considered an outlier when it comes to the creation of new cities.

“So many things account for why you have crime at any given time and particular types of crime,” he said. “Even if you created a new city, and you saw that crime was going down, I bet you would also see that crime is going down in other areas, not very far from that particular new city.”

While the Buckhead City Committee maintains resources would be better managed under the direction of their proposed city, Topalli cautioned that breaking away could be detrimental, not only for Atlanta but a newly formed Buckhead, too.

In response to the Buckhead Cityhood movement, Atlanta Police issued a statement on their Facebook page, which reads in part:

The women and men of the Atlanta Police Department work hard every day, putting their lives on the line to protect the City of Atlanta and reduce crime. We understand that this is a challenging time for the policing profession as well as our nation and the City of Atlanta isn’t exempt.  We remain committed to our citizens and  believe that the City is stronger when we work together and together we will overcome any challenges we face.

APD officers are the backbone of this department and largely responsible for the day to day response to 911 calls and patrol duties.  While the community is relaxing in the comfort of their homes, our officers are out helping people in crisis and tracking down lawbreakers. To insinuate that we’re looking the other way when it comes to crime is a far-fetched notion. The APD has more than 150 sworn members assigned to multiple specialized units outside of our Field Operations Division and these resources are utilized on a regular basis in Buckhead and throughout the city. We have several aircraft available to patrol, assist in details or provide support during active situations. Our APEX unit targets the most violent of criminals. This year alone, they have recovered 42 stolen firearms, taken 82 firearms from felons and arrested more than 700 felons. Regardless of where their enforcement activity occurs, it has an impact on crime throughout the entire city, Buckhead included.

Response to Buckhead Cityhood Movement The women and men of the Atlanta Police Department work hard every day, putting...

Posted by City of Atlanta Police Department on Wednesday, August 4, 2021