Claims of faulty alarms being investigated in Buckhead apartment fire

Officials are continuing to investigate what caused a two-alarm fire Saturday at a Buckhead apartment complex. 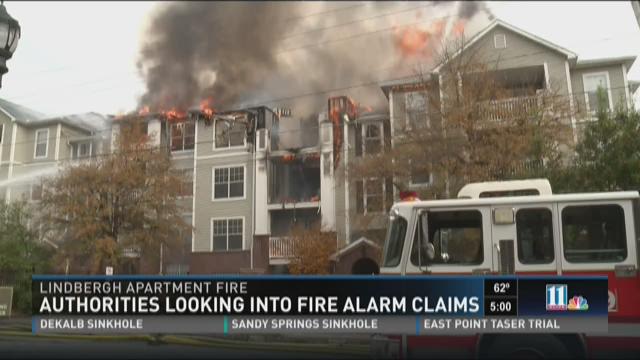 ATLANTA, Ga – Officials are continuing to investigate what caused a major fire Saturday at a Buckhead apartment complex that damaged more than two dozen units.

The two-alarm fire broke out at 771 Lindbergh at the intersection of Adina Drive and Fountainhead Lane. Fire officials said the majority of the damage was confined to the top floor of the four-level complex. Some third-floor units suffered fire damage, and the first and second floor units experienced water damage.

“It was a large fire, and some of the structure is unsafe to go back into, so it is taking some time to investigate the causes,” said Atlanta fire department spokesman Cortez Stafford.

Stafford confirmed the department is investigating claims the complex’s fire alarms did not go off, claims that some residents made to 11 Alive.

"We saw people sticking their heads out and realizing the building next to them was on fire,” said Jasimine Jacobs, who lives nearby and was shouting for people to evacuate. “But we didn't hear any alarms or see any sprinklers or anything like that."

Cortez said the department is pulling records on the apartment’s fire alarm system to determine if they worked.

The state’s fire marshal, under the Georgia Insurance and Fire Commissioner’s office, has not been called to investigate, according to spokesman Glenn Allen. Allen said alarm systems at complexes such as 771 Lindbergh are supposed to be annually inspected by local jurisdictions.

"The fact that somebody could have been hurt in this thing knowing that the fire alarm didn't get off is inexcusable to me," said 771 Lindbergh resident Jim Schultz, who says he did not hear any alarms.

According to the American Red Cross, 26 units were impacted by the fire.

771 Lindbergh managers said they have comment on the fire, and are waiting on Atlanta fire investigators to release its report.