On Tuesday the Clayton Co. DA confirmed her office is investigating as the man seen being hit in cell phone video is now in the Fulton County Jail. 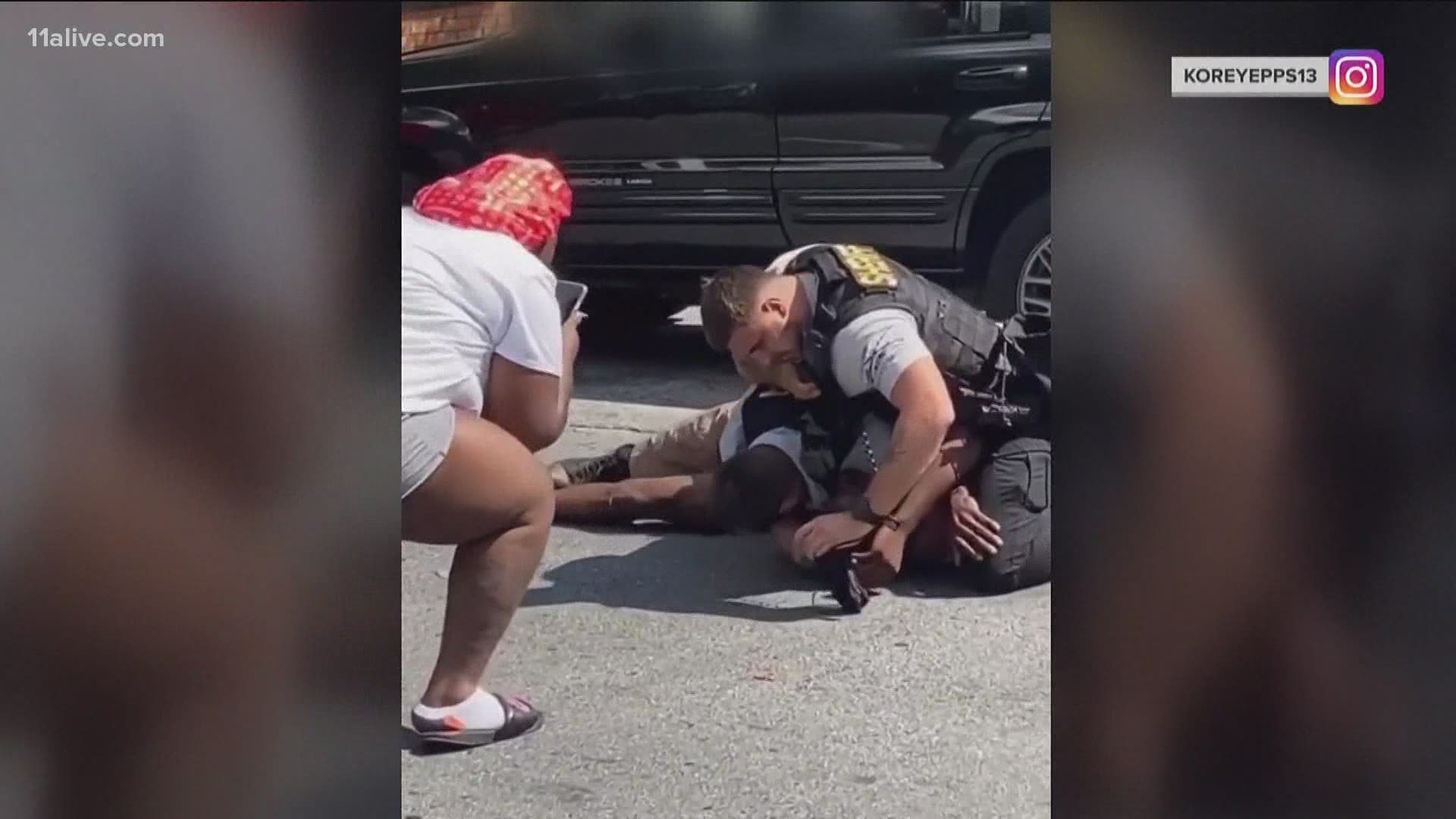 CLAYTON COUNTY, Ga. — Clayton County District Attorney Tasha Mosley confirmed her office is investigating the incident leading up to the arrest of Roderick Walker on Sept. 11.

Mosley read a prepared statement Tuesday outside of the Clayton County Courthouse and didn't take any questions.

In the statement, she mentioned the incident leading up to Walker's arrest being captured in cell phone videos.

"Those videos have been widely circulated. Sheriff Victor Hill has referred this matter to our office for a full investigation. To that end, my office is collecting any and pertinent information. As with any investigation, we encourage anyone who witnessed anything to contact my office," Mosley said.

Walker was a passenger in a car that was allegedly pulled over due to a broken taillight in Clayton County, his attorneys previously told 11Alive. However, they said that things turned physical when deputies asked for his identification and Walker asked questions in response since he wasn't driving.

Videos pick up after this alleged exchange and show deputies on top of Walker, pinning him to the ground. Walker is then punched repeatedly by one of the deputies, the video shows.

While reading from the prepared statement, Mosley didn't provide any specifics of her office's investigation or release new information about the incident involving Walker and Clayton County deputies.

"The Georgia Rules of Professional Conduct strictly forbid a prosecutor from making any comments to the media that could heighten public condemnation of any parties involved in a case. Therefore I can't and will not comment on the details of any ongoing investigation. We will not rush to judgment," she said.

Prior to Tuesday's press conference 11Alive exchanged emails with Mosley inquiring about the investigation. The district attorney wrote, "Once the investigation is complete, I will examine all evidence gathered and make a decision to charge or not to charge based on that evidence."

Mosley confirmed "an investigation into the matter" was opened on Sept. 14 and she added "ethical rules prevent me from commenting on a pending investigation."

Hill's statements released by his office did confirm he ordered an internal affairs investigation into the incident and a deputy was later fired for excessive force.

Beyond those statements, Hill hasn't discussed the case publicly and his office has yet to respond to multiple requests to interview Hill or release records related to the arrest.

The sheriff's office hasn't identified any of the deputies present on Sept. 11 and they have not identified the fired deputy.

Attorneys representing Walker have also been unable to obtain records or information about the incident leading up to Walker's arrest.

"We don't have the warrants, we don't have the police report," attorney Torris Butterfield told 11Alive Tuesday. "Because once we get those things we can do open records requests, we can order their personnel file from POST, from the academy, we can find out if there have been previous complaints against these officers. The public can then say that officer did the same thing to me. These are all things we want to start investigating but we don't have that right now."

In Fulton County, he is now being held in connection to previous probation violations including allegedly possessing a firearm by a convicted felon and first-degree cruelty to children.

Butterfield said he is working to have Walker released from the Fulton County jail so he can be seen by medical specialists for injuries he said Walker suffered during the incident with Clayton County deputies.

"We believe he is probably going to need to see a neurologist for the mild traumatic brain injury as well as his body, " Butterfield said. "He is going to have MRIs. These are things the jail can't provide."

Walker's attorney said after his client was pinned to the ground and punched he lost a large amount of blood; the attorney said Walker is now battling constant headaches, struggling to see out of his left eye, and possibly tweaked a previous injury.

"Mr. Walker was in a serious accident where he has rods and pins in his legs. If you look at the video when this happened to him he grabbed his left leg, so he doesn't know if it injured, but it is our goal to be able to get him out of this jail so he can have proper medical treatment."

"It is our goal to see if the Fulton County system will allow us to be able to get out and come back to court," Butterfield said. "Whether that means ankle monitor or whatever we can do, we need to get him out immediately to get the proper medical treatment that the jail is unable to provide."

Citing the deputy being fired in Clayton County, Butterfield is hopeful the criminal charges in Clayton against Walker will be dropped.

"I hope that they do the right thing, based on the fact that someone was fired and this was an alleged tail light infraction that they dismiss this whole case. He suffered enough, he already has other issues," Butterfield said.