The chief said the officer acted accordingly based on the information he had at the time and worked to de-escalate the situation once involved. 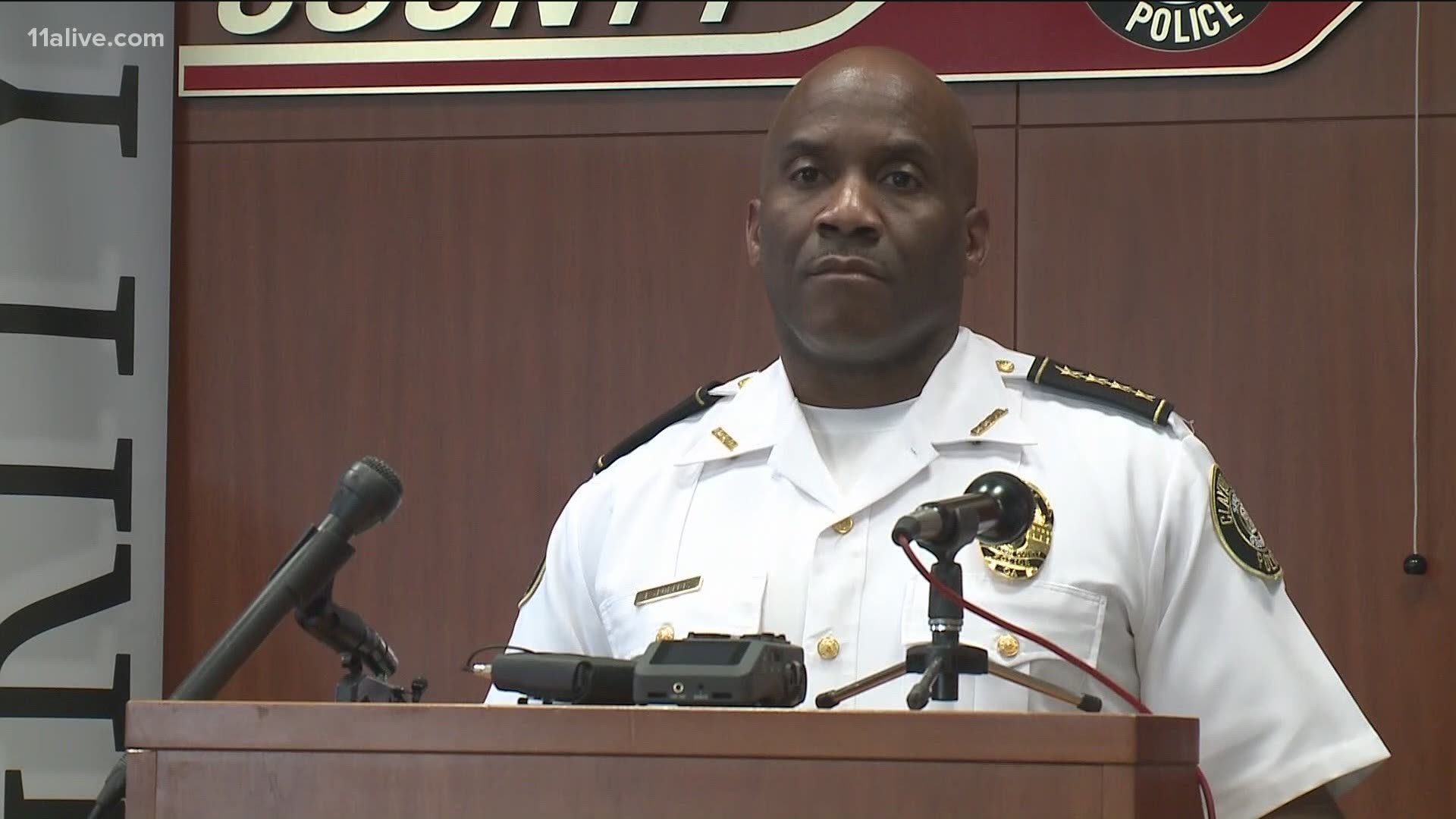 CLAYTON COUNTY, Ga. — The chief of the Clayton County Police Department is defending the actions of his officer who held a group of teens at gunpoint while responding to a call.

"After reviewing body camera video, the officer, considering the extreme circumstances, was very de-escalating in his approach to the young men," said Chief Kevin Roberts. "I believe the officer did an excellent job of talking to them and calming them and letting them know he didn't want anybody to get hurt."

It was on Monday, June 15, when police said 911 dispatch received a call from a convenience store on Flint River Road of a group of teens playing with a gun, first inside the store, then in the parking lot.

When the officer responded, he got out of his patrol car with his weapon drawn and pointed at the teens. A video of the incident from the viewpoint of residents - who came outside and began recording the interaction - was posted on Instagram and began after the officer had responded with his gun drawn.

In it, residents can be heard asking why the officer was holding his gun at the teens.

The day after the incident, Clayton County Police said they were aware of what happened, but cautioned that the video clip did not show the whole encounter and lacked "total context." They later released body camera video, 911 calls and an incident report that gave more background on the officer's response and why he immediately drew his gun.

Roberts said that things only seemed to escalate in his opinion when a crowd of spectators grew.

"The external noise surrounding the interaction is what was so loud," Roberts said. "What I mean by that is citizens, out of concern, stopped. We have no problem with that. Citizens began to film. We have no problem with that. There's no law against that. But the citizens began agitating the situation, possibly making these young men feel threatened."

Roberts said that he understands why people gathered, but he stressed the importance of being "good witnesses but to not interfere," especially when they may be missing crucial information.

"To agitate the situation can sometimes create a situation where things get worse very quickly and I'm glad that didn't happen," he said.

Roberts doubled down in supporting his officer, saying that there was "legitimacy" in why the officer responded in the way that he did.

"The first tagline that I heard was 'Clayton County officer points a weapon at unarmed teens'," Roberts explained. "I just explained to you how the call went out. It was dispatched with at least one person possibly armed. Further investigation did reveal that there was a BB gun that could be perceived as a weapon involved."

"It is unfortunate we are having a conversation about teens being armed with possible weapons, but it happens. It happens a lot, unfortunately," Roberts said. "And I totally understand. I have kids - no one wants to see their teenage son or daughter looking down the barrel of the gun."

When asked why the officer couldn't have used a taser instead of a gun because of the ages of the teens, Roberts said point-blank "that's not a fair request."

"To ask someone to use a taser when there's a possible firearm present puts you in a losing position already," he said.

Roberts said overall, he thought his officer would get an "A+" grade in de-escalating the situation and said he did so as best as he could, given the information that he had.

"His tone was calm but instructive. His commands were clear. He let them know that he wanted everyone to get home safely, including himself," Roberts said. "He blotted out everything around him. He gave clear directions. He encouraged them to blot out the surrounding noise."

As for demands being made by the community for the officer's firing, Roberts said that he understands there needs to be serious continued discussions about police and citizens' interactions, but added that his department is committed to partnering with their community.

"What we are committed to is partnering with the citizens of Clayton County to keep them safe," Roberts assured. "Make no mistakes about it, the Clayton County Police Department is very transparent in what we do, w'ere part of this community, we don't hold the community hostage and we listen to our community citizens and we appreciate their input."