There are now calls for the officers involved in the stop to be fired, and plans for a Wednesday protest. 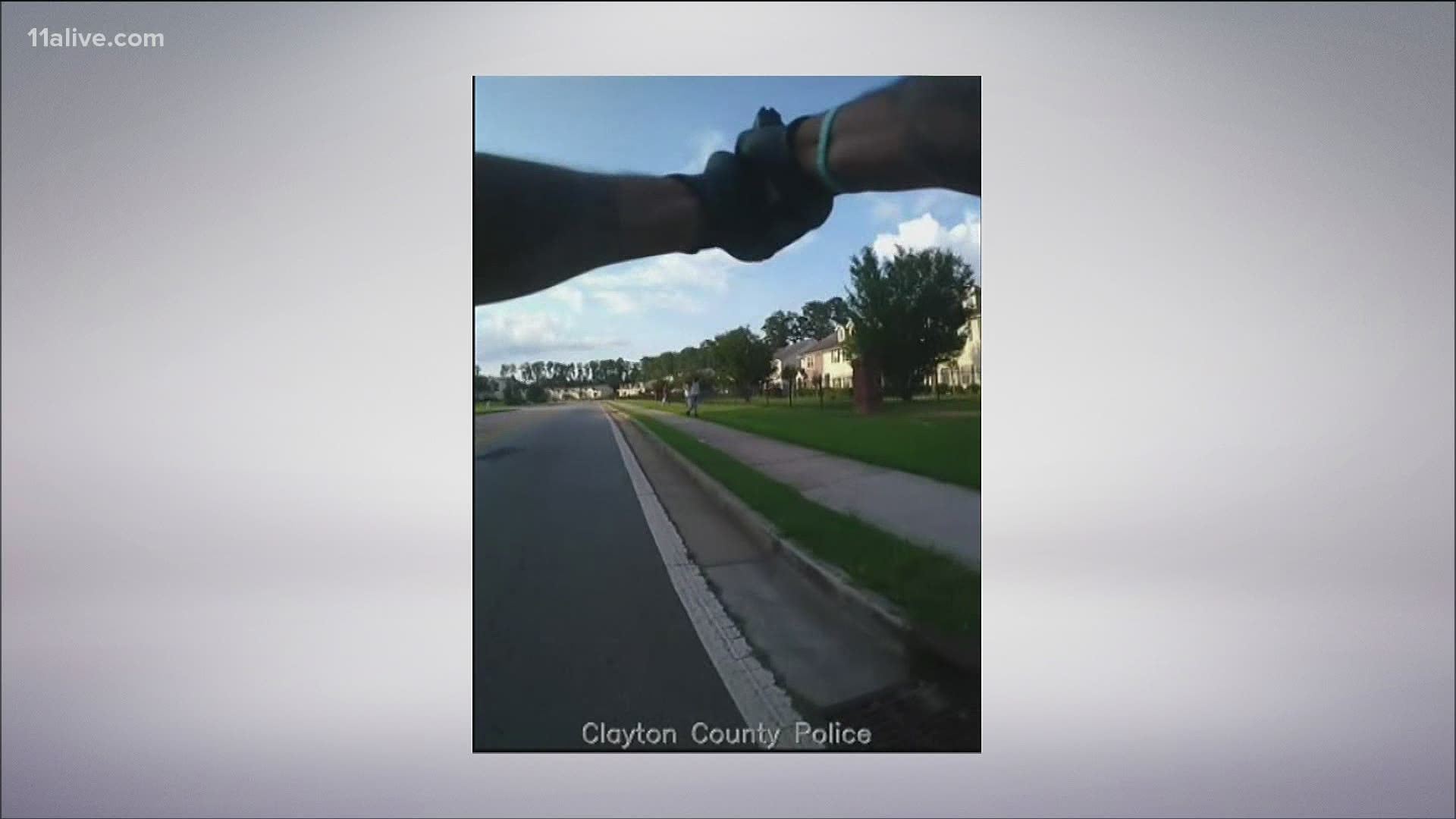 CLAYTON COUNTY, Ga. — A Clayton County police officer is under scrutiny after video showed him holding several teens at gunpoint during an encounter Monday.

There are now calls for the officers involved in the stop to be fired, and plans for a Wednesday protest. 11Alive News asked the Clayton County Police Department about the video, and they said they are aware of it.

Video of the encounter was shared to Instagram, and begins in the middle of the stop of the teens.

According to captions shared with the video, the teens were "shadow boxing" near a convenience store and then used a cut-through in the neighborhood, which is where the police interaction apparently happened.

In the video clip, the teens can be seen standing in the grass facing an officer with their hands over their heads.

"Why you got a gun out?" one person cries out.

"Because I'm being safe," the officer responded.

Several people in the background are pleading with the officer, "They are kids," asking, "What did they do?"

"What did they do wrong?" the person presumably recording the video asks repeatedly.

"This is too much," someone else can be heard crying out. "They babies."

The officers then seem to speak to the group of teens, though it's unclear what they said because the camera is too far away to pick up the audio. The officers later let the teens go, but at the end of the video several more police cars, and even a Clayton County Sheriff's Office patrol car, can be seen arriving to the scene.

RELATED: Daughter of Rayshard Brooks found out her father was killed while celebrating birthday

In a statement, the Clayton County Police Department said its leadership has seen the video circulating on social media "involving what appears to be young teenagers," adding that "what everyone is seeing is a small portion of the entire incident."

"Chief Kevin Roberts remains committed to being transparent and accountable to our community," a spokesperson for the department said.

In a release from the department, police explain what they said led up to the encounter.

According to a two-page description provided by the department, police said officers responded around 7:15 p.m. Monday to the 500 block of Flint River Road after getting reports of a person armed. Police said the 911 caller reported there were three teens inside of the location who were stealing and waving a gun.

Police said they got a second call moments later reporting that the teens were now in the parking lot, playing with a gun and fighting. The caller gave 911 a description of the teens that were in the store, and the direction in which they went.

The statement said an officer began patrolling the area, before stopping the group that they said matched the description of the teens.

As for allegations of the officer drawing the gun on the teens, police had this to say: "Due to the allegation that the juveniles were in possession of a gun, the officer approached them with his duty weapon drawn and pointed at the juveniles. The officer lowered the weapon once the juveniles complied with the officer’s verbal commands to stop and show their hands." (Watch the full body camera video from the incident)

According to police, the officer began a "calm dialogue with the juveniles about why he was there and bystanders immediately began yelling and agitating the situation." Police said the teens were cooperative and remained with their hands visible as instructed by the officer, and when a back-up officer arrived, the teens were frisked. Police said no weapons were found.

Police said the officer then explained to them the dangers of playing with a weapon, especially one that looked so life-like. The officer then called the teens' parents and explained the situation before releasing the teens from the scene. No charges were filed.

The department concluded its statement by saying, "We want to remind our Clayton County citizens that we are committed to protecting and serving each and every one of our citizens through decades of established trust and effective communication. We will remain committed to being transparent and accountable to our community."

In a impromptu press conference held the next day, residents called for accountability of the officer, including his firing, and changes to policing.

"We're saying, we would like to see revisions. And not just your revisions. We want you to give your community an opportunity to say, 'this is how we want you to police us.' I think that is the only thing that they can do as of right now," explained Shannelle, the woman who said she took the video of the incident.

"What would have happened of the community didn't show up and show out for them that day? ... if one of those kids made the wrong move, what would have happened?" she asked. "Its unacceptable and we're not going to stand for it and we're asking Chief Kevin Roberts to make revisions now, and to hear from the community now, because we're not going to accept this in our community."

Rapper Clifford "TI" Harris, who has become a vocal community activist, was also at the press conference and questioned the officer's actions.

"Why don't we ever see little white kids being held a gunpoint? Period. The constitution was written for all Americans except it seems like you only have to be a certain shade or a certain color to reap the benefits," TI said.

"Why are only people of color, young black boys, young black girls being gunned down at the hands of policemen and suing excuses like BB guns, water guns," he questioned. "There are little white boys that real rifles that go hunting every week with their grandparents and parents. They aren't being held at gunpoint."

That's why Shenelle said residents are calling for change, and holding local leadership accountable in order to change what she called a system of unfair policing.

"The truth is, this is not an isolated incident. When I posted that video yesterday so many people from Clayton County began (direct messaging) me saying, 'that happened to me. I was innocent. I didn't do anything.' That's the problem," she said. "If there was no problem and the policing was great the community would not have feared in the way that they did and intervened in the way that they did," "It's history."

The stop comes at a time when police are under increased scrutiny for their interactions with the black community, and just days after a fatal shooting of Rayshard Brooks, a black man who was shot Friday after an encounter with white Atlanta Police officers.

Editor's note: An earlier version of this story reported that multiple officers were involved in the incident. Only one police Clayton County officer initially responded to the scene and drew his gun, according to information from police. This story has been updated to reflect that information.