Sheriff Victor Hill, entered a not guilty plea Tuesday on federal charges of allegedly violating the civil rights of detainees at the Clayton County Jail. 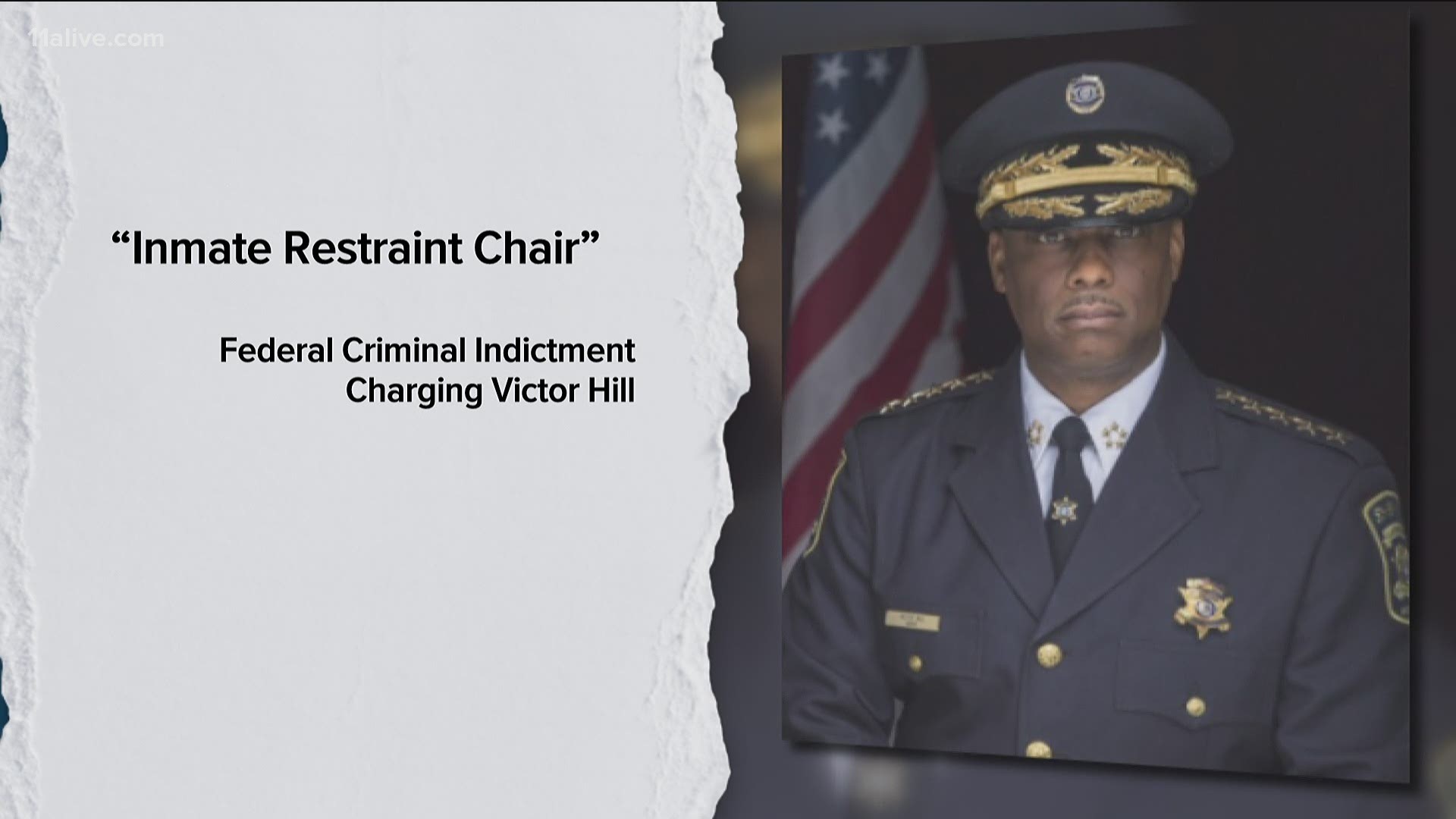 At the hearing, Federal Magistrate Judge Russell said Hill would receive $50,000 bail. He turned himself in Tuesday morning.

A recently unsealed federal indictment alleges Hill, on multiple occasions, had county inmates placed in restraint chairs for several hours in violation of their constitutional rights.

The incidents described in the indictment all took place in 2020 and each inmate claims being strapped in the chair for hours "caused physical pain and resulted in bodily injury."

The Clayton County Sheriff's Office has an "Inmate Restraint Chair" policy, according to court records, that was approved by Hill. It reads: "a restrain chair may be used by Security staff to provide safe containment of an inmate exhibiting violent or uncontrollable behavior and to prevent self-injury, injury to others or property when other control techniques are not effective."

All four victims in the indictment though are described as being placed in the chair while being "unarmed, not under the influence of drugs, and offered no resistance."

One man allegedly wasn't allowed to use the restroom and "urinated on the restraint chair."

Hill is quoted as telling two of the victims if they repeat the crimes they were accused of, "I'm a sit your a*** in that chair for sixteen hours straight. Do you understand me? I need to hear from both of y'all that y'all not gonna show y'all's a** in my county no more."

Another victim is described as completing landscaping work for a CCSO deputy, unrelated to the deputy's employment with the sheriff's office. The victim and the deputy then had a dispute over payment.

Hill is described in the indictment as learning of the dispute and calling the victim only named as G.H. and asking "why he was harassing his deputy."

The next day Hill is accused in the federal documents of directing the deputy to "swear out an arrest warrant against G.H. for harassing communications," then Hill texted: "This is Sheriff Victor Hill. We have a warrant for your arrest. Would you like to turn yourself in, or have my Deputies find you?," to which the victim supposedly didn't respond.

Hill then sent "a fugitive squad armed with handguns and AR-15 rifles to Butts County in an attempt to arrest G.H. on the misdemeanor arrest warrant," the indictment reads.

G.H. later turned himself in at the sheriff's office and then "Immediately upon Defendant Hill's arrival, although G.H. was surrounded by law enforcement personnel, remained compliant, and never posed a threat to anyone, G.H. was strapped into a restraint chair and left there for several hours per Defendant Hill's orders."

Hill is expected to have a hearing Tuesday before U.S. Magistrate Judge Russell Vineyard. The judge's staff ,when contacted by 11Alive, said the hearing would take place at 3 p.m.

Hill posted a statement to his social media accounts reading: "Today I will begin the process of fighting a political motivated federal legal case.  My legal team are the only ones authorized to speak on the details of this matter, and they are confident about the facts of this case. Meanwhile, as we go through this process, I will continue to focus on the mission of fighting crime in Clayton County for continued success."