It's been 5 years since Clint Eastwood came to Macon to film the movie, "Trouble with the Curve," and Tuesday, he'll be back in Central Georgia to film a new movie at Robins Air Force Base. 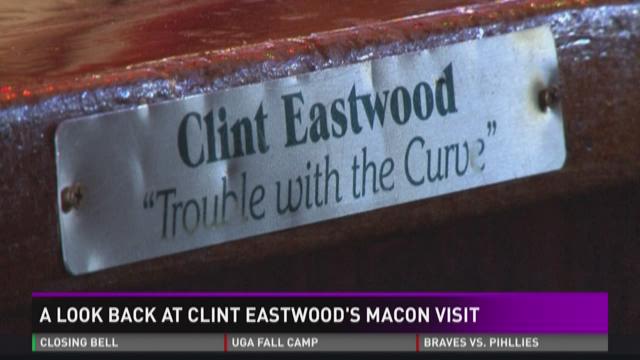 It's been 5 years since Clint Eastwood came to Macon to film the movie, "Trouble with the Curve," and Tuesday, he'll be back in Central Georgia to film a new movie at Robins Air Force Base.

Luther Williams Field in Macon is one of the spots Clint Eastwood and the cast and crew filmed for his last Central Georgia-shot Hollywood hit.

During that visit, Eastwood went to Northside Cheers Bar and Grill.

Cliff Hagerman owns Cheers now, but back in 2012 when Eastwood came, Jimmy Pearson owned the bar.

A picture of he and the famous star still hangs on the wall along with a movie poster from the film.

Hagerman says Pearson told him that when Eastwood was on set at the bar, he made sure to speak to all the fans that came out to watch.

"Clint was very gracious about speaking to people and meeting people, and he was happy to be here and happy to meet everybody that wanted to meet him," said Hagerman.

Hagerman says it was surreal to see the bar he now owns on the big screen, "To see those shots and to think about the regulars that come in here, who a lot of them have been coming in here since the '70s and '80s, it's just surreal to see that setting on film when I see these people from Macon here every day."

Soon, people in Warner Robins will be able to say the same when Eastwood is at Robins Air Force Base this week for another film in Central Georgia.

Eastwood will be in Warner Robins to film the movie "The 15:17 to Paris." It's based on the true story of three Americans who foiled a terrorist attack aboard a train in France.

Eastwood is directing the movie.