Among those is the death of Kevil Wingo, who died in custody while begging for medical help. He never got it, and he died alone. 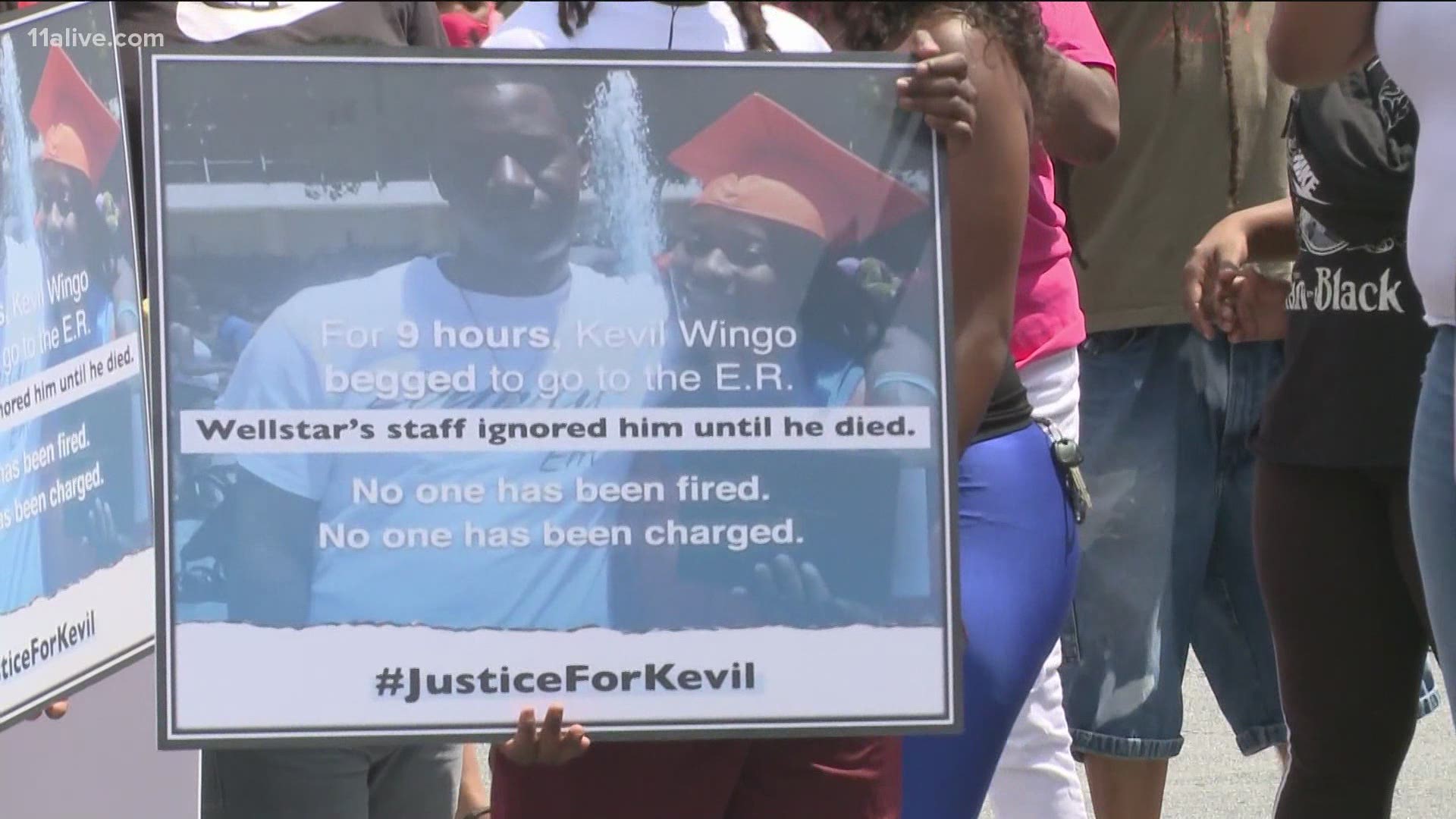 COBB COUNTY, Ga. — After calls for a criminal investigation into how a Cobb County inmate died in custody after spending hours begging for medical help, it appears they may be answered.

On Wednesday, Cobb County District Attorney Joyette Holmes said in a statement that she has asked the US Attorney's Office for the Northern District of Georgia to conduct an independent investigation into the deaths of inmates at the Cobb County Detention Center.

For nearly two years, 11Alive has reported about multiple deaths at Cobb County’s Detention Center and the public’s outrage that followed. Since June 2018, at least seven men and women have died while in custody at the jail. Since 2004, there have been at least 51.

The request from the district attorney comes after an 11Alive Reveal investigation uncovered 2019 video of Kevil Wingo detained at the jail. The video shows Wingo collapsing in pain and begging to be sent to the hospital for more than seven hours. Multiple deputies and medical personnel admitted to hearing Wingo say he could not breathe and seeing him collapse, without doing anything to help him.

Instead, staff put in him a padded room, where he died.

Now, there may be a renewed investigation into the case, with the new actions by the district attorney's office.

In a prepared statement released Wednesday afternoon, District Attorney Joyette Holmes wrote that the jail video uncovered by 11Alive “should be a part of an independent investigation into Mr. Wingo’s death and other inmate deaths at the jail,” said Holmes. “It is for this reason that I have asked the U.S. Attorney for the Northern District of Georgia to conduct an independent investigation of the recent inmate deaths at the Cobb Adult Detention Center.”

A spokesperson for U.S. Attorney Byung Pak acknowledged the request, but declined to comment.

This past June, the sheriff’s office concluded its investigation into Wingo’s death. It found no one committed a crime or violated any jail policy. The report did not recommend disciplinary action taken on any employee. But Wingo's family contends what happened is a crime.

“All I want is justice for my brother and I want everybody to be charged in the death of his murder,” Wingo’s sister Tiffany said at a rally outside the detention center in August.

Philip released his report on Wingo’s death on Feb. 10, 2020. In it, he said “gastric ulcers in crack cocaine users has been noted to have an increased incidence.”

At the time of Wingo’s death, WellStar Health System staffed and provided the detention center’s medical care. The county ended its contract with WellStar this past May.

“What we have found is heartbreaking and unacceptable,” a WellStar spokesperson said in a statement to the Reveal.

In August, the county’s new medical contractor, WellPath, put two nurses at the jail on administrative leave in response to the Reveal's investigation.

On Aug. 27, the sheriff’s office requested the Georgia Bureau of Investigation conduct an administrative review of its original investigation into Wingo’s death, which will evaluate how the county handled the case. It's separate and unrelated to the district attorney's request for an independent investigation.

In response to the Reveal’s investigation into Wingo’s death, Yeager wrote an editorial published in August in the Marietta Daily Journal demanding the DA request an independent investigation and criticizing Sheriff Neil Warren for not taking action himself.

Emails to the sheriff’s office to get a response to the district attorney's request and the GBI administrative review were not returned.

In an email sent on Aug. 7, Sheriff Warren said any loss of life at the detention center is tragic. He also defended his staff.

“The dedicated men and women of the Cobb Sheriff’s Office work in one of the most difficult environments imaginable but are always attentive to inmates who are in need of medical care. At the end of the day, we are law enforcement officers – not medical professionals. For this reason, I have always made it a priority to contract with the best health care providers available in hopes of giving inmates access to the same caliber of doctors and nurses that they would see if they were not in our custody,” Warren said.

In December, ACLU Georgia organized a town hall meeting for families and former inmates to voice their concerns about the jail. During the meeting, some people described the conditions as unsafe and inhumane.

In addition to requesting the investigation, Holmes asked that the Attorney General designate another attorney to coordinate the investigation into the recent deaths of inmates at the Cobb County Detention Center.

"As I have previously stated, I am committed to ensuring that matters of public safety and the concerns of our citizens be addressed by our office or referred to the appropriate agency without favor or fear," she said.

"Although it is too early to either condemn or congratulate DA Holmes for her recusal and recommendation that another agency independently investigate Mr. Kevil Wingo’s death, it is very encouraging that she has requested the U.S. Attorney’s office to investigate not only the criminal violation of Mr. Kevil Wingo’s constitutional right to receive adequate medical care, but also the constitutional violations committed against the many other detainees that died at the Cobb County Adult Detention Center under Sheriff Neil Warren," Wingo's family attorney, Timothy Gardner said.

Yeager says it’s unclear whether Holmes is recusing herself from the independent investigation.

According to a statement from the attorney general's office, it appears state law requires that in order for a special prosecutor to be appointed, a district attorney would have to notify the office of a conflict disqualifying themselves. It's unclear whether Holmes has done that.

"Whether the new appointed special prosecutor will independently present the evidence to a special grand jury or request an independent investigation by the GBI is unknown. What is clear is that, as of this date, just two short weeks before the year anniversary of his death, there is still no justice for Kevil Wingo,” Yeager said.