David Evans and Sydni Jones are each facing two charges of kidnapping a minor under 13. 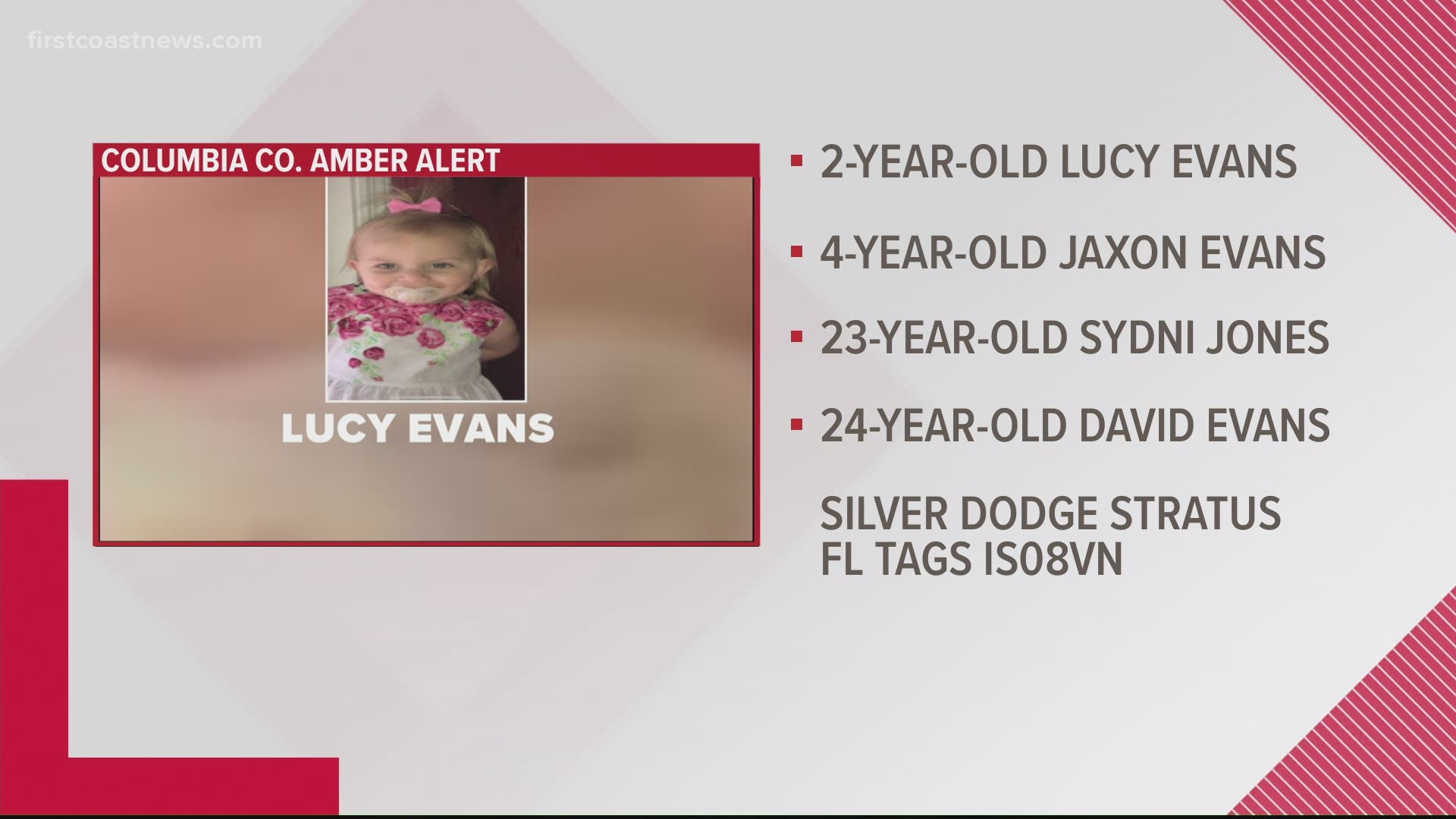 COLUMBIA COUNTY, Fla. — UPDATE:  Two young children are safe after deputies say their biological parents who don’t have custody of the children kidnapped them.

Lucy and Jaxon Evans were found at a motel in Suwannee County, Florida Thursday afternoon.

The spokesperson says their grandmother has custody of them.

Officers said both David Evans and Sydni Jones were taken into custody.

“We are very grateful for the outcome of this case,” stated Sheriff Mark Hunter. “I would like to commend our team of detectives, along with the Suwannee County Sheriff’s Office, FDLE, federal law enforcement partners, and local community for helping to bring this case to a quick and safe conclusion.”

Around 1:30 p.m. Thursday, police responded to the hotel after receiving a tip that the missing kids were staying in a room there.

Clesi said he helped police get the kids by going to the room and telling Evans and Jones that he was there for a routine maintenance call.

After getting inside the room, he was able to identify the parents and kids from the Amber Alert and left to inform police.

Clesi then came back with the breaching team outside, however, they refused to open the door that time.

Clesi opened the room using the master key and police were able to walk in and get the kids.

He said the parents seemed surprised and police immediately took them into custody.

Fortunately, the kids were calm and ok, Clesi said. The Florida Department of Children and Families responded to the hotel and took the kids.

Both Evans and Jones have been booked in the Suwanee County jail and are each facing two charges of kidnapping a minor under 13-years-old being held on a $300,000 bond.

Here are David Evans and Sydni Jones' mug shots vs. the pictures of them sent out during the Amber Alert (courtesy the CCSO). They're each facing two charges of kidnapping a minor under 13-years-old, and are booked in the Suwanee County jail held on $300,000.00 bond each. pic.twitter.com/6Y6kHOpQLI

LISTEN: Owner of Steamboat Dive Inn motel where Lucy and Jaxon were found describes helping police get into the room they were in with their biological parents.
-Says checked in early last night, booked room for two nights
-David Evans cut his hair short and shaved off his beard pic.twitter.com/063MjLrG4I

The Columbia County Sheriff's Office issued an AMBER Alert for two children believed to have been abducted by their parents.

Jones was living in the same house but was not supposed to have unsupervised guardianship over the children.

Both suspects have warrants for their arrest.

Anyone with information is urged to call the Columbia County Sheriff's Office at 386-752-7015.

•David Evans & Sydni Jones are the biological parents.
•They do NOT have custody.
•There are warrants out for their arrests.
•This is considered a parental abduction. https://t.co/iGpJxQQS0A