The teen died following incident at South Fulton Bojangles'. Family says he was beaten. The police report has a different story. 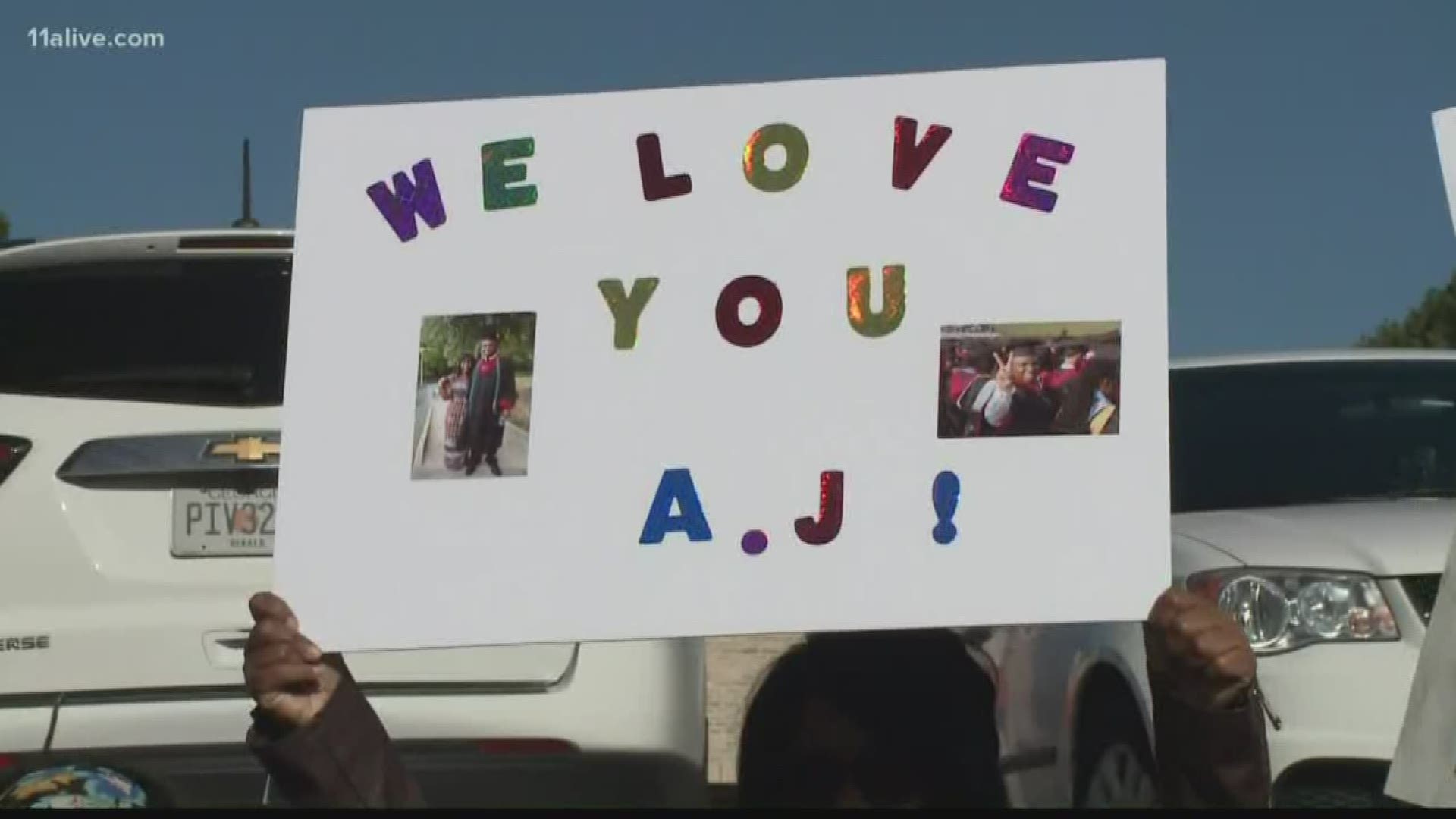 SOUTH FULTON, Ga. — A 19-year-old man died following an incident at a Bojangles' restaurant on Fulton Industrial Boulevard on Saturday evening, Nov. 16, 2019. Family and friends want to know how and why.

According to attorneys for the family, there was an altercation between Anthony Mitchell and employees at the Bojangles' restaurant. Family says Mitchell has autism.

During the altercation, the attorneys said in a release, four restaurant employees allegedly beat Mitchell and threw chairs at him. Mitchell suffered internal bleeding and other injuries, the lawyers' release said.

RELATED: Family of teen with autism who died after confrontation with police holds vigil in his honor, while demanding answers

According to the attorneys' release, several Fulton County police officers came to the scene and "used excessive force" on Mitchell, which they said caused additional physical harm. The attorneys said that Grady EMS arrived. They said the EMTs looked at Mitchell, failed to render aid, and departed.

The release said that Mitchell's mother was called to the scene by police and was asked to take Mitchell home. The attorneys said that about 10 minutes after she got him home, his breathing became labored and he died in his mother's arms.

A short cellphone video that was circulated with the attorney's press release allegedly shows Mitchell on the ground in the parking lot, an officer's knee on his back and what appears to be a plastic bag over his head, while being handcuffed.

But a Fulton County Police report regarding the incident tells a somewhat different story.

According to the police narrative, when the two Fulton County officers arrived, there was already a third officer on the scene. Mitchell was sitting on the ground blocking the door of the restaurant, the police report said, blocking employees from exiting. He was spitting blood at two of the officers.

One of the officers asked Mitchell if he wanted to go to jail.

The report said that Mitchell mumbled, "I'm going to beat your [expletive]," then stood up.

Mitchell "began to stare aggressively" at two of the officers, according to the police report, before he began to bang his head and body against the door of the restaurant. Then, Mitchell entered the restaurant, still spitting blood from his mouth.

All three officers told Mitchell to stop several times, the report said. After he entered the restaurant, the officers were able to hold Mitchell and place him in handcuffs.

The officers said they removed him from the restaurant and requested medical attention for his bleeding.

Statham told officers that Mitchell had come into the restaurant asking for food. His card was declined when attempting to pay for the food. According to the report, at that point, Statham gave him a meal for free.

After he ate, Mitchell asked for more food, the police report said. When the card declined again, Statham asked Mitchell to leave the establishment.

According to the police report, at that point, Mitchell became irate, jumped over the counter and approached him. Statham told officers that he tried to defend himself against Mitchell.

Other employees helped to get Mitchell from behind the counter and out of the store, the police report said. That is when they said they called police.

Police said Mitchell was able to give officers his mother's contact information. When officers contacted his mother, Shanita Swanson, she told them he has autism and was off of his medication.

When she arrived at the restaurant a short time later, the police report said, she was able to calm Mitchell down. A fire unit from the South Fulton Fire Department, along with a Grady EMS unit arrived to examine Mitchell.

According to the police report, Swanson told officers that he did not need medical attention and that she was an EMT. She told them she would get him medical assistance if needed. As a result, the report said, he was released to Swanson without incident.

The Fulton County Medical Examiner's Office said on Monday that the exact cause of Mitchell's death has yet to be determined. The office is awaiting additional testing before they can make that determination.

Attorneys for the family held a news conference Monday afternoon asking for complete transparency and a full accounting of what happened during the incident to cause Mitchell's death.