Friends, family and classmates are mourning the death of a high school student shot and killed in northwest Atlanta Monday night. 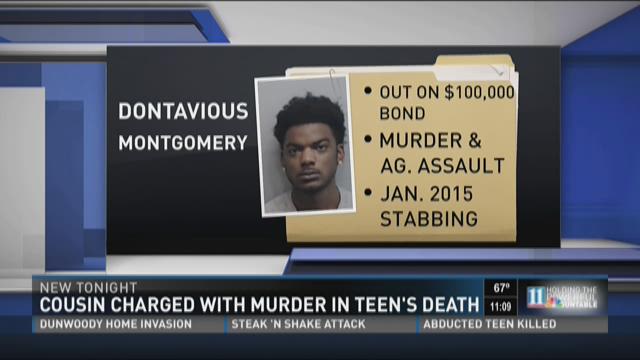 ATLANTA -- Police have charged a man with murder in the death of his 15-year-old cousin.

Marquez Montgomery, 15, died after being shot in the head at home on Adkins Road Monday night.

On Tuesday, Atlanta police said that 21-year-old Dontavious Montgomery was arrested and charged with felony murder in the shooting.

"The preliminary investigation indicates the victim was shot by the suspect... with no provocation," police said in a statement.

Dontavious Montgomery was out on bond after being charged in a fatal stabbing last year. According to police, he was charged with murder and aggravated assault in the death of Nicholas Roberts, who was found stabbed in the back in January 2015. Montgomery was released on a $100,000 bond in October 2015.

Family members said the shooting of Marquez was an accident.

Donterric Montgomery said that Dontavious had a gun that somehow discharged as he was sitting on a bed.

"It's not just one good kid being taken away from our family -- it's two," Donterric Montgomery said. "With him having a weapon we knew nothing about, he took his little cousin's life by mistake. And he's dealing with it and we're dealing with that. And his dealing with it may be a lot different because he's at fault."

Marquez Montgomery was a sophomore at Benjamin E. Mays High School, and played nose guard on the school's football team, family said. He was also on the school's baseball team.

"He was just a great kid," his uncle said. "Honestly, like 15 years, he's never been in a fight. He was just the personality you just love to be."

The slain teen had dreams of going to the University of Georgia, according to his uncle.

"No matter NFL, doctor, lawyer -- he was a good kid," Donterric Montgomery said. "Teachers loved him."

"Our deepest condolences go out to the family of Marquez Montgomery, who attended Benjamin E. Mays High School. Atlanta Public Schools sent a crisis team to Mays this morning to provide grief counseling for students and staff."

A GoFundMe account has been established to help the family pay for funeral expenses.

Dontavis Montgomery was out on bond from a previous homicide: