The high levels of the toxin were found in the Covington Mill and Settler’s Grove neighborhoods. 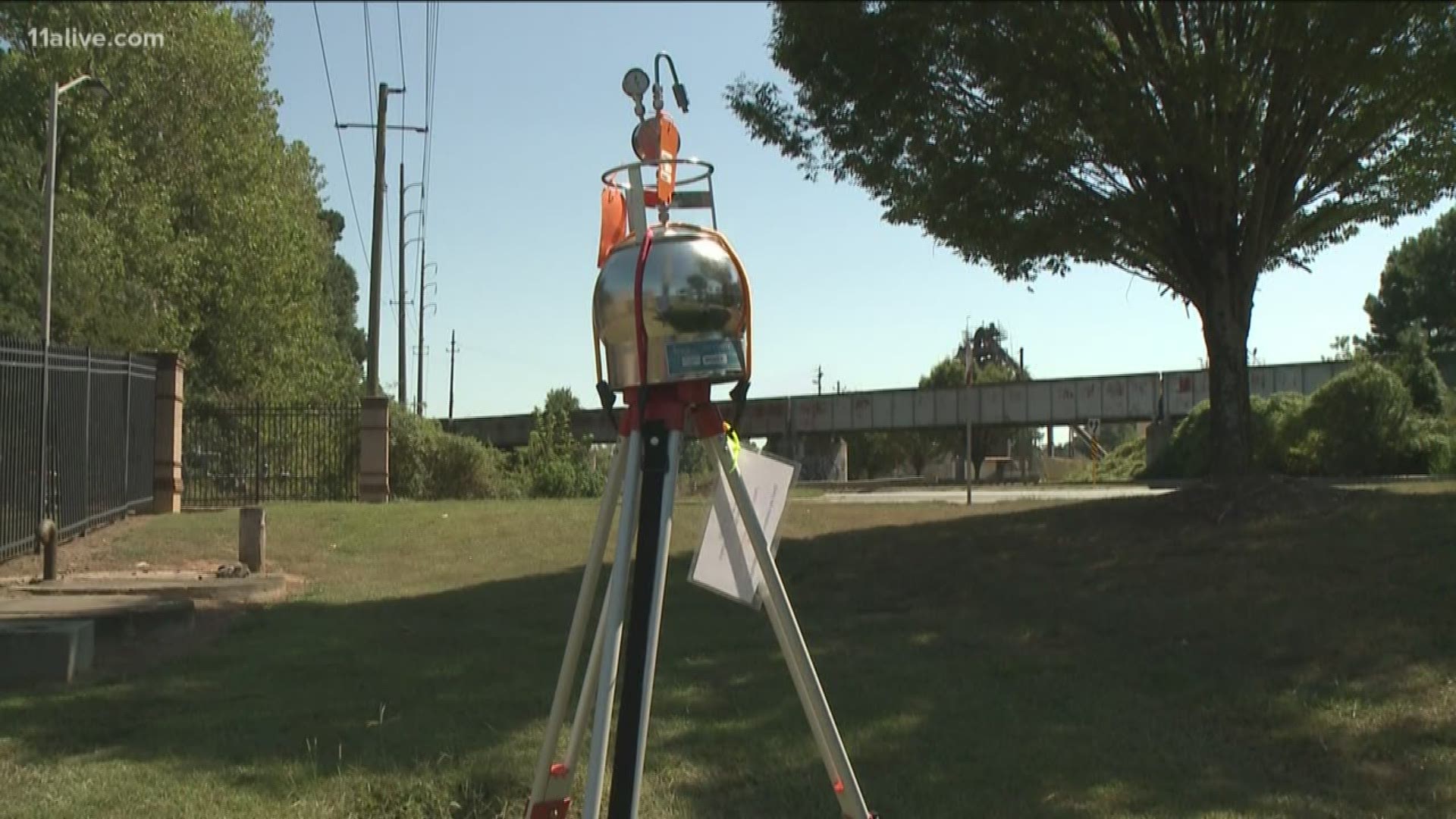 The request follows air test results recently released by Montrose Air Quality Services. The environmental firm conducted the tests for the city over seven days at 11 locations surrounding the BD plant and nearby neighborhoods. The tests were looking for the presence of ethylene oxide, a chemical used by BD to sterilize medical equipment.

Ethylene oxide is a known carcinogen.

Residents are concerned about the levels, wondering if ethylene oxide has impacted them.

Ray and Bernadette Smith wanted to spend the rest of the lives in their home, less than a mile from the BD plant. But in early 2016, their lives were forever changed when they learned of Ray's diagnosis.

"When the cancer was discovered it was in so many different parts of his body," Bernadette Smith said. "It was in his brain, in his spine, in his adrenal."

He died just 50 days later, but in June of that same year, Bernadette found out she had breast cancer.

"And I was at stage two at that point," she said. "And there's no history of breast cancer anywhere in my family."

Michael Geoffroy is an attorney representing Smith and other families. He said the new testing released by the city shows elevated ethylene oxide levels.

Results indicated particularly high levels of the gas in the Covington Mill and Settler’s Grove neighborhoods.

“I really don’t have the authority to actually force Bard to shut down. I’m asking them to just voluntarily shut down until we get this figured out and have the proper controls in place,” said Mayor Ronnie Johnston.

BD said four scientists who reviewed the results say the levels are still so low, it has no measurable impact on humans, even though it acknowledges the levels were higher than EPA screening value of the gas.

One of those experts includes Dr. Jonathan Borak, M.D., clinical professor of medicine at Yale School of Medicine.

“The results were higher than U.S. EPA’s screening assessment value, which uses a 0.02 μg/m3 measurement, but that is a screening level, not a health-based level. U.S. EPA’s screening level does not account for background levels of EtO made by other sources, including the human body, so it is helpful to compare risks, but not predict risks. These data do not indicate a meaningful cancer risk for the surrounding Covington community,” said Borak.

Days before the tests were taken, BD accidentally leaked 54 pounds of ethylene oxide. The Georgia Environmental Protection Division said it was not notified by BD, and will be opening an investigation into the facility following the leak. The agency, too, conducted their own tests of the air, but the results of those tests are not yet finalized. Meanwhile, the EPD called the results of the other tests "deeply troubling."

BD does not believe the leak impacted the test results.

“We are grateful for BD’s presence in our city and realize the number of Covington residents that are employed at BD’s sterilization facility,” Covington Mayor Ronnie Johnston said. “However, given the results of our independent air test, the Covington City Council and I have no choice but to ask BD to do the right thing for their employees and neighbors and temporarily cease operations at their Covington sterilization facility until additional safeguards are in place and we have data verifying the efficiency of those safeguards."

“This is not a decision we took lightly, but when the safety of thousands of residents and BD employees is at risk, the only prudent action is to temporarily cease operations until we can be assured the safety of our community isn’t compromised.”

The mayor and city council sent a letter to BD officials requesting that they temporarily cease operations. Also, in an effort to gain support for the Covington community, letters were sent to state and federal environmental agency officials.

The company responded in a letter of their own, that included charts, saying they believe the residents of Covington "deserve to understand the scientific facts and be assured that the BD facility is not creating health risks to the community." 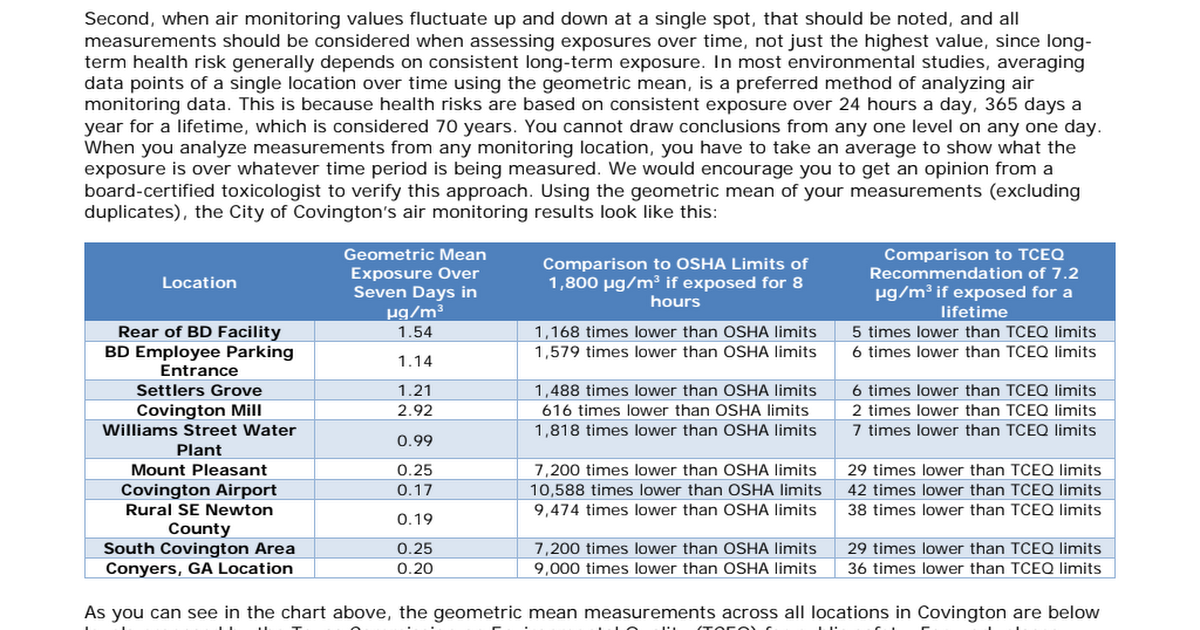 At a similar facility, Sterigenics in Cobb County, officials are telling them that it won't be allowed to restart operations until it passes a battery of safety checks.

The plant in Smyrna, which also specializes in sterilizing medical tools, implemented a self-imposed shut down in early September which would tentatively end in October when "air scrubbers" and other enhancements - including a sealing off existing vents and installing a negative pressure system - were installed at the location. 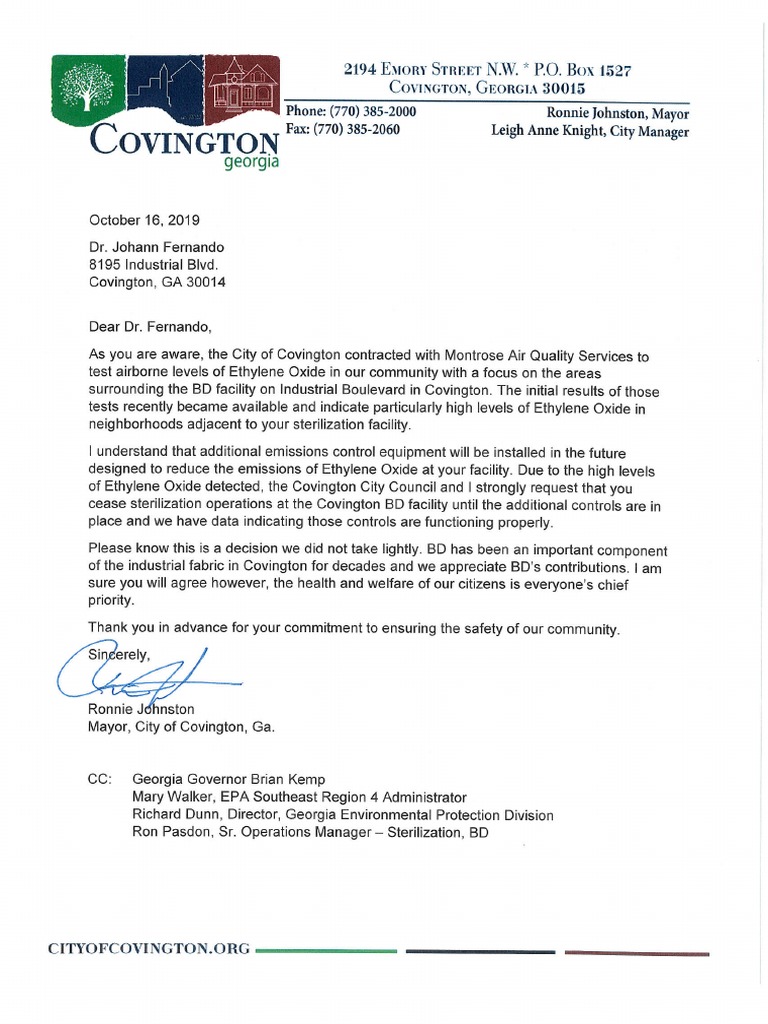 Letter to BD
Discover everything Scribd has to offer, including books and audiobooks from major publishers.