Vivian is lying in honor at the Capitol rotunda Wednesday afternoon. 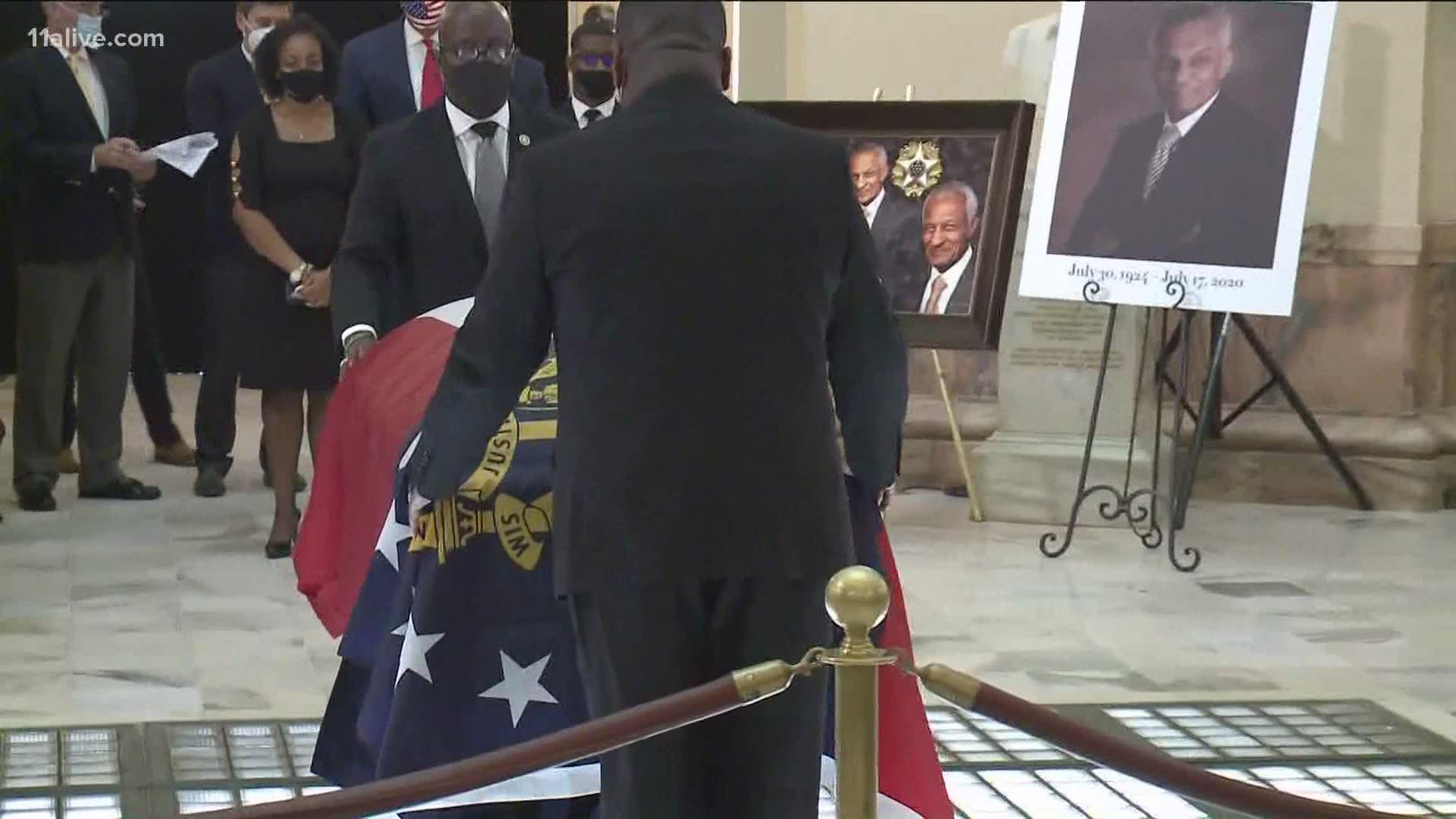 ATLANTA — In a brief ceremony as Rev. C.T. Vivian lie in tribute at the Georgia State Capitol on Wednesday, the Civil Rights icon was celebrated as a man who "proved that good people don't finish last."

Those were the words of Rev. Gerald Durley, who gave a rousing set of remarks that brought those present to their feet in applause for Vivian. Durley said, "you changed Georgia, you changed America."

Vivian will lie in honor at the Capitol rotunda until 3 p.m. Wednesday, a rare honor in Georgia, given to a man who put his stamp on the Civil Rights Movement through participation in lunch counter sit-ins, the Freedom Rides, his work with the Southern Christian Leadership Conference, and as a trusted friend to Dr. Martin Luther King, Jr.

His son, Alvin Vivian, also spoke, and implored those gathered to "live out the history of my father."

"Love one another, trust one another, connect with each other across our cultural differences," he said. "Then we can become the America that we say we are. Until we do that, we are not."

Gov. Brian Kemp described Vivian as an "incredible man" who "stood on the front lines of the fight for equality."

RELATED: Funeral for the Rev. C.T. Vivian set for Thursday

"From some of the first sit-ins at lunch counters, to Freedom Rides, to facing down segregationists on the steps of the courthouse of Selma, Dr. Vivian's story and impact is nothing short of inspiring," the governor said.

Vivian, he added, was "steadfast and calm," during turbulent times, "grounded in the knowledge that he fought for something much bigger than the obstacles that were in front of him."

Vivian's private funeral will be held Thursday at 11 a.m. at Providence Missionary Baptist Church in Atlanta, in a family-only ceremony. In lieu of flowers, the family is asking for contributions to continue his legacy by supporting The C.T. and Octavia Vivian Museum & Archives, Inc.

Vivian's son, Alvin, thanked the Lewis family on Wednesday, saying they had postponed announcing the Congressman's arrangements, "so that they did not bump into each other," as he put it.

"Because both men deserve to have everything done well, decent, and in order, for both of them," Alvin Vivian said.

1 / 11
AP
Mourners sit in the capitol rotunda around the casket of The Rev. C.T. Vivian for his memorial service, Wednesday, July 22, 2020, in Atlanta. Rev. Vivian, an early and key adviser to the Rev. Martin Luther King Jr. who organized pivotal civil rights campaigns and spent decades advocating for justice and equality, died Friday at the age of 95. (AP Photo/John Bazemore)