It would outlaw phone use by hand, and would provide stiff penalties that increase with repeated conviction 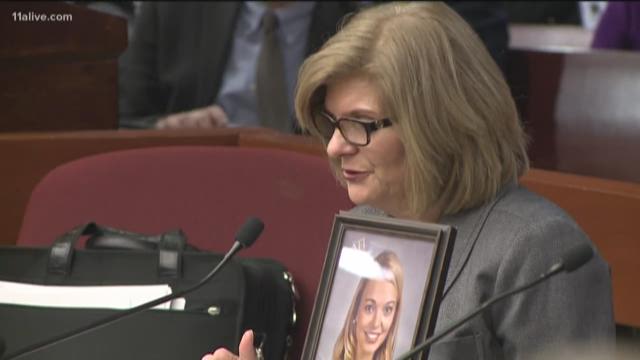 ATLANTA -- It was an emotional day at the state Capitol Monday as lawmakers heard from the mothers of three young people killed in traffic accidents caused by distracted drivers. They support a bill that would change the way a lot of us use our phones in the car.

Clark lost her daughter in 2015. She was one of five nursing students whose car was slammed by a tractor trailer on I-16, driven by a man who told police he had no idea the car was in front of him had stopped in traffic.

"This bill has the ability to save lives for every driver, every passenger and every pedestrian in Georgia," said Natalie Bacho, whose daughter Abby was nine years old when a driver plowed into the family minvan and took Abby’s life. "All of this was caused by an 18-year-old who ran a red light as he was in a series of phone calls," Bacho told the committee.

Like Clark, she supports the bill. It would outlaw phone use by hand, and would provide stiff penalties that increase with repeated convictions. It would allow one swipe or touch of a phone to answer or make a call. And it would allow hands-free GPS use.

Sherry Madliak’s son Parker was walking in Newnan when a driver swerved his car off the road and struck him. Many backers of the bill want to see distracted driving take on the same cultural stigma as drunk driving. "I sit at a traffic light and see people all around me texting and talking and not paying attention," Madliak said. "This carelessness took my son."

One committee member, Rep. Ed Setzler (R-Acworth), questioned whether the bill goes too far. He said drivers are distracted by everything from their 5-speed transmissions to passengers in the car.