“She was so afraid, that she started shaking and she passed out as I was holding her.” 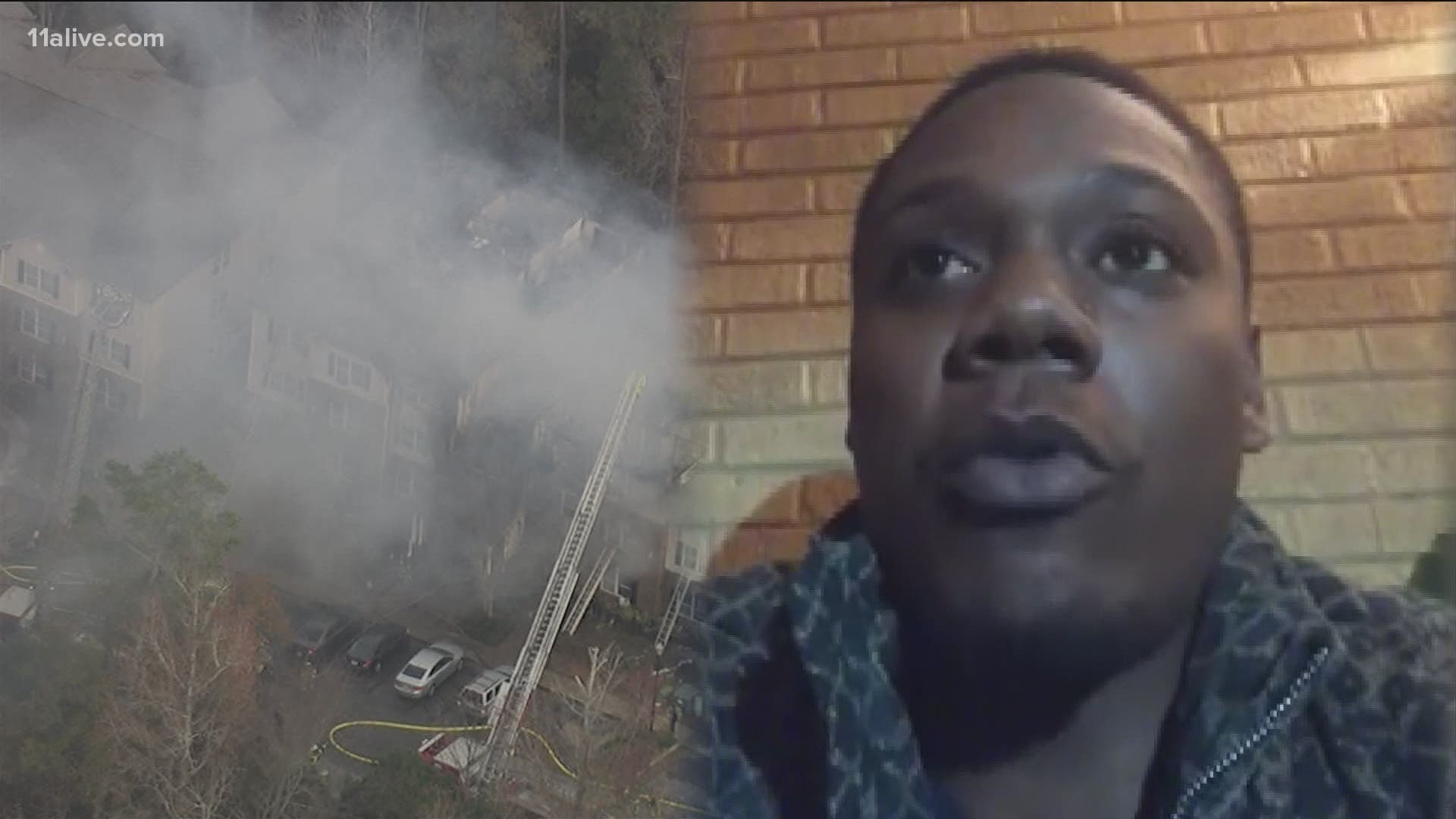 DEKALB COUNTY, Ga. — Jacquill Moss had just brought back lunch for his family on Friday, Dec. 11. His grandmother, Agnes - just returned from therapy.

She and some of his young cousins were napping. Jacquill headed for the shower.

But a few minutes later, he saw the smoke; he heard the screams.

“It was coming from beneath us and on top of us at the same time," he remembered.

Their apartment building of Farington Village Drive in DeKalb County was on fire. Their first attempt to escape, blocked.

“We try to go out through the front door, but before we can even get to the hallway, the whole hallway is covered in smoke,” he recounted.

There's eight family members in the home, including Jacquill, his mom Jacinda, grandmother, and five cousins. They ended up trapped in a bedroom with only one way out: the window.

Jacquill began trying to convince them to jump from the third-floor window.

"Go! Go! Go!" he cried desperately in a five-second video he recorded on his phone, a phone he hoped his twin brother and dad would find in the bushes below after he tossed it out. Because Jacquill knew at that moment: he wasn't leaving until everyone else was out.

"I wanted someone to find it (phone) to give to my father, so they could have closure, so they would know what happened," he tearfully told 11Alive's Hope Ford.

First, Jacquill talked his two little cousins into jumping. Then his mom, and three of his other cousins.

The last two in the house, were Jacquill and Agnes. He quickly helped the 78-year-old to the window.

"She was so afraid that she started shaking and she passed out as I was holding her. That’s when I had to go to the window carrying her, while trying to get the fire off my leg," Jacquill described, miming the movements as he continued.

At this point in the story, Jacquill went silent. He sniffled and looked away from his camera phone into the distance. Thirty seconds go by before he continued, describing dropping his grandmother from the window onto a mattress someone pulled from a nearby apartment.

“Once I dropped her, I had like literally a few seconds before the roof collapsed," he continued. "And, literally, I climb up on the window sill, and then I just jump as far as I can, cause I had to jump over them because my family was laying down on the concrete.”

The horror didn't stop there.

Once medics started helping his family, Jacquill, on the concrete, pulled out his phone to record the fire still burning behind him. You hear his sobs in between him comforting his mother.

“S**t was hard, man, that’s why I can’t help but think about it. It’s those little moments, my grandmother shaking, my little cousin’s calling me. It’s those moments that stand out to me the most.”

Jacquill fractured his back in two spots, his chest is bruised and he has burns on his hands and legs. His grandmother, mother, and one of his cousins also suffered broken backs, bones, and burns. His little cousins had less extensive injuries.

While in the hospital, his grandmother tested positive for COVID-19.

His uncle, Terry Nelson, drove from Cincinnati to Atlanta to help the family, stopping to see Jacquill first. He calls his nephew, a hero.

"Like, you start doing searches of fires in Atlanta - three people died, family died, you name it," he listed. "But, everybody in this building got out. The spirit is still in them, they’re still alive. They still have breath.”

RELATED: Son rushes to Atlanta after 8 family members severely injured in fire: ‘I cried pretty much all day’

Jacquill said he remains thankful for the people who gave his little cousins shoes and clothes, who brought them water, hugged them. He said surviving ... is a blessing.

The family will start physical therapy soon, while trying to find a new place to live.

Two family-approved GoFundMe pages were started to help the family with medical bills.

"People have been showing us a lot of love," Jacquill said. "And I'm thankful for it and I will definitely pay it forward in the future."

In all, 18 people were injured in the fire, including a pregnant woman and other small children. Other families were displaced, face injuries and months of recovery. GoFundMe sent 11Alive a list of verified accounts aimed at helping the victims of Friday’s fire.

How the fire started is still under investigation.